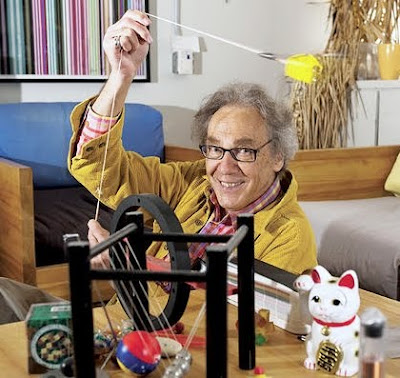 Whether it's swinging on a pendulum or riding a rocket tricycle, the former MIT professor, now on YouTube, finds different ways to assist students as they study the laws of physics.

The Christian Science Monitor
Walter Lewin used to hand a daffodil to each of the 600 students in his physics class. It would be on the day he projected Maxwell's equations on the four walls of the lecture hall.

Marvel at these stunningly elegant descriptions of how electricity and magnetism are related – complete, beautiful, and filled with intrinsic beauty, he told them.

That's just one way he's made physics memorable. He's also swung a giant pendulum with a 33 lb. weight attached to it that on its return trip just missed smashing his face in by a fraction of an inch – all to prove the law of the conservation of energy (the weight can swing back no higher than the spot where it was released).

That bit of stage business earned Professor Lewin legendary status among his students and made him a Web video star with millions of viewers on YouTube and iTunes, as well as on the OpenCourseWare website at the Massachusetts Institute of Technology (MIT) in Cambridge, where Lewin taught for more than three decades.

"Mr. Wizard" has met the Internet.

Lewin has also been known to do other risky-looking things (but safe, he insists, if you understand physics). He's ridden that pendulum like a swing, piloted a rocket tricycle powered by a fire extinguisher, and turned cigarette smoke from blue to white by holding it in his lungs. His aim: Take examples from real life to make physics leap from textbook pages and become indelibly etched in students' minds.

Now retired from teaching, Lewin made a brief encore appearance last May at MIT before a packed lecture hall and 30,000 viewers live online. He's also turned his attention to writing a book about his life and career called "For the Love of Physics," with coauthor Warren Goldstein.

In it Lewin reveals how his family suffered when he was a young boy in the Netherlands during the Nazi occupation in World War II. "The Nazis quickly sent my grandparents to Auschwitz and murdered them – gassed them – the day they arrived, Nov. 19, 1942," he writes. "I always use the word murdered, so we do not let language hide the reality."

Lewin began teaching high school physics in the Netherlands. "Already there I was an eccentric teacher," concedes Lewin, whose frazzled hair and European accent inevitably bring to mind Albert Einstein.

He was invited to teach at MIT in the 1960s on a one-year program and never left, taking full advantage of the impressive resources there to fine-tune his lectures.

"MIT had a long history of physics demonstrations," he says. "I just did them in a slightly different way."

Though the lectures have an informal, unhurried look, they're the result of weeks of exacting preparation and rehearsal. On "performance day," Lewin would arrive at the lecture hall at 5:30 a.m. and conduct a full dress rehearsal.

"My timing is perfect to 100 percent accuracy [because] I dry run my lectures so carefully," he says during a recent interview at the office he still keeps at MIT.

He admits to being a bit of a ham. "My lectures are performances ... they're like an actor on the stage," he says. "I see that as a very positive thing."

So naturally his emergence as an online star didn't surprise him. "I knew it would be a success because of my style of lecturing. Even people who don't understand physics still watch me," he says.

His ability as a lecturer is nearly legendary. "With that laserlike focus, he eliminates what's inessential to him, getting to a form of engagement that is so intense, it produces a remarkable joie de vivre," says Nancy Stieber, a longtime friend.

"He exploded onto the stage," recalls Steven Leeb, a professor of electrical engineering and computer science at MIT who once took a course from Lewin in 1984. "[He] seized us by the brains, and took off on a roller-coaster ride.... He is a genius in the classroom with an unmatched resourcefulness for finding ways to make concepts plain."

Only one of his thousands of experiments ever failed, Lewin says. He once was demonstrating how sound waves could shatter a glass, but it wouldn't break. "Some glasses are just stronger than others. It's a little bit of a tricky demo," he says with a shrug. He repeated the experiment later with the same class. It worked.

What he'll do next invites another verbal shrug. "I just got an invitation to give a talk in Malaysia," he says.

He also spends a couple of hours a day answering mail from fans, who often ask questions about natural phenomena, such as rainbows. "They think they've seen rainbows, but they haven't really seen them," he says, until they understand the physics behind the beautiful bows.

Meanwhile, physics continues to fascinate him. "[W]e're ignorant about 96 percent of the mass/energy in our universe," he writes. "Physics has explained so much, but we still have many mysteries to solve, which I find very inspiring."

Email ThisBlogThis!Share to TwitterShare to FacebookShare to Pinterest
Labels: "For the Love of Physics", Walter Lewin