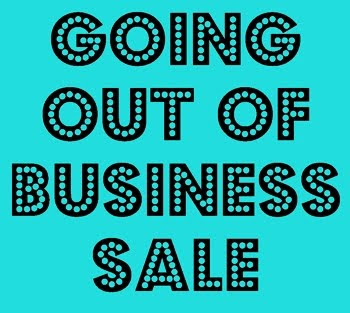 I have seen this before...the furniture store that is quitting business and six months later open a new store two blocks away. I also recall a mom and pop photo store that was going out of business and would spend long hours at night marking everything up 25% and then having a close out sale...everything 20% off. Caveat emptor.

Time
When something’s called a liquidation sale, the prices just have to be good, don’t they? Actually, they don’t. And here’s proof they’re not at Borders right now.

The investigators at dealnews shopped the aisles of a Borders in New York City before and after the announcement that all remaining Borders stores would be liquidated. Of the 25 items on its shopping list, 19 were cheaper the week before the store posted “everything must go” prices. Five other items were listed at the same price before and after the so-called sale began.

In other words, customers would have been better off buying books like Water for Elephants and Too Big to Fail before Borders announced liquidation sales—the books cost $10.47 and $12.60 before the sale started, and $13.46 and $16.20 afterward, respectively. Other books, like Bossypants and Unbroken, were listed at the same price regardless of the timing ($18.89 and $18.90 respectively).

What’s more, none of these prices are particularly good anyway. Before and since Borders’ liquidation process began, the prices for all of these books have been cheaper at Amazon and Walmart.

This shouldn’t be all that surprising. Retailers have a history of using (and abusing) the phrase “liquidation sale,” which apparently holds great sway over consumers. (Phrases like “limited time only” have great power as well.) Other stores, notably Circuit City, have hosted liquidation sales with prices that were much higher than run-of-the-mill electronics sales, and earlier this year, the prices at going-out-of-business sales at several Borders could routinely be beaten by discount coupon codes offered for online purchases at Borders website.
Posted by Mercury at 7:10 AM