Pillow fights are harmless and messy and can be an expression of disobedience against tyranny which makes reference to a rather obscure 1933 film by Jean Vigo...Zéro de conduite [Zero for Conduct].

The film draws extensively on Vigo's boarding school experiences to depict a repressive and bureaucratised educational establishment in which surreal acts of rebellion occur, reflecting Vigo's anarchist view of childhood. The title refers to a mark the boys would get which prevented from going out on Sundays. It also shows the influence of Alfred Jarry's play Ubu Roi.

Though the film was not immediately popular, it has proven to be enduringly influential. François Truffaut paid homage to Zéro de conduite in his 1959 film The 400 Blows. The anarchic classroom and recess scenes in Truffaut's film borrow heavily from Vigo's film, as does a classic scene in which a mischievous group of schoolboys are led through the streets by one of their schoolmasters. Lindsay Anderson's film If.... in its whole is a less whimsical reimagining of Zéro de conduite. 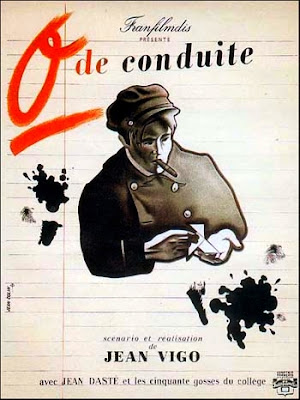