Medieval Knights and their armor 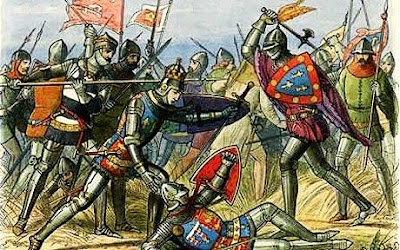 "Medieval Knights on a Treadmill Put Historical Myths to the Test"

As a boy visiting England's armories, Graham Askew always wondered how armored knights could move and fight. When he became a biomechanical expert at the University of Leeds, he decided to find out by putting historical re-enactors in full metal armor on a treadmill.

Popular Mechanics
The legendary knights of yesteryear, mounted on mighty steeds and clad in full suits of heavy armor, have descended to a new low. No longer needed for castle sieges, and with a skill set that was out of date centuries ago, they have been reduced to running on treadmills for science experiments.

Ok, so we're not talking about actual knights here, just historical fight interpreters in full medieval costume. But for a new study from the University of Leeds, published in Proceedings of the Royal Society B, researchers were serious about putting a historical myth to the test in the lab. Clearly, a knight's shining armor required a lot of energy to wear, and the Leeds researchers wanted to find out just how much this metal wardrobe wore down medieval warriors—and how badly it hurt their battle performance.

The researchers, including author Graham Askew, recruited seasoned fight interpreters from the nearby Royal Armouries museum in Leeds to use a treadmill in full armor borrowed from the museum while scientists measured how much energy they were using. The four volunteers walked and ran at different paces on a treadmill while attached to a respirometer, both while they were dressed in their full suit of armor and while they were dressed normally. The respirometer measured the amount of oxygen being used, which the researchers used as a measure of the energy expended.

The fact that the volunteers were all used to wearing armor was important for historical accuracy. "We didn't want someone's inexperience wearing armor to be a factor in our results, so these people, being experienced, were ideal." Askew says.

Nevertheless, the team found that the volunteers expended nearly twice as much energy walking and running while wearing the armor as when they weren't. "Some of it, I'm afraid, is really sort of stating the obvious," Thom Richardson, the Keeper of Armour at the Royal Armories, says. "It is harder to walk around wearing armor than if you're not, but it is interesting to get figures for that."

But while the fact that wearing armor makes moving (and fighting) more difficult was always obvious, actually dressing volunteers in feudal-era garb and crunching the numbers turned up some interesting results. For instance, Askew says, he found that moving around in armor is actually much more taxing than carrying the same load, but in a backpack. This is partially because of how the weight is distributed. "A suit of medieval armor loads the lower limbs. You have 7 or 8 kilos [15 to 18 pounds] of armor on the legs, so when you swing your legs, your muscles are having to do much more work," Askew says.

In addition, the armor impairs breathing, Askew says. Wearing plates of heavy steel over the chest and back, while potentially preventing death in a battle, limits how much the lungs can expand and how much air a soldier can breathe in. Not only that, but some of the helmets from the medieval period had only thin slits in the face mask, further restricting oxygen flow.

The idea for this research was born out of Askew's lifelong fascination with armor. "I can remember the first time I saw proper medieval armor when I went down to the Tower of London with my dad when I was about 10" he says. He wondered how the men-at-arms who wore the heavy plates of steel managed to move. After he became a scientist specializing in biomechanics, he realized that he would finally be able to answer that question.

Historians believe that full plate armor probably became popular to save reckless nobles from their own bad behavior as they challenged one another in peacetime tournaments. "The history of the tournament is a lovely contrast between nobility and royalty trying to do more and more dangerous deeds, and their courts and retainers trying to keep them from killing themselves," Richardson says. But the armor used in Askew's tests was very similar to that worn by soldiers in the Hundred Years' War, and he says the results could fuel some old debates among scholars and history buffs. "We think there are a number of battles in the past where the high cost of moving with armor may have played an important role in determining the outcome of the battle" Askew says.

In particular, the study mentions the Battle of Agincourt, where the outnumbered English defeated the French in a decisive victory. Askew and others believe that the course of battle may have been influenced by the armored French soldiers marching across freshly plowed, muddy fields in their already heavy armor, dooming them against English longbow men. Then again, no historical debate is so easily settled. "It is arguably the persistence of the French knights in trying to charge the English lines on horseback at Agincourt that actually brings about their defeat," Richardson says.

Either way, armor on the battlefield didn't last that long. The rise of firearms made metal armor obsolete. "Anyone, with no practice at all, could pick up a firearm, wander onto a battlefield and kill a king," Richardson says. But with the advent of Kevlar and other bulletproof materials, armor is making a comeback. "The current flak jacket is hardly any different to the pair of plates that a man-at-arms of Edward the Third was wearing—except that he didn't have access to ballistic panels or ceramics and Kevlar and things," Richardson says.

Askew says that the current analog to the full body armor that he studied is the bomb suit favored by bomb-disposal units. "They probably face very similar issues as the medieval knights in that you're trying to maximize protection of the whole body but still retain mobility and an ability to do the job that you need to do," Askew says.
Posted by Mercury at 6:22 PM