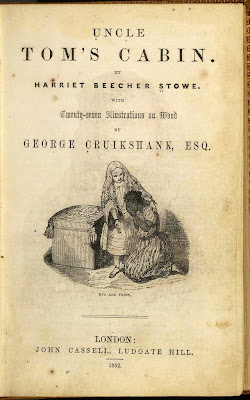 "The Strange Career of Uncle Tom"

How the little Yankee woman's book got so big.

Slate
Who can recite from memory even a single line of dialogue or description from Uncle Tom's Cabin, the most influential novel in American history? Anybody? No, I didn't think so. Yet almost everyone who knows anything at all about Harriet Beecher Stowe's book can recall Abraham Lincoln's famous remark testifying to its earthshaking impact. When the author dropped by to meet the president one day in 1862, he supposedly clasped her dainty hand in his oversize paw and said: "Is this the little woman who made this great war?"

Lincoln's quip may well be apocryphal. It wasn't written down until 34 years later, and even Stowe's visit to the White House is fuzzily documented at best. Still, the story—like so many literary anecdotes—points to a larger truth: Uncle Tom's Cabin remains better-known for its consequences than its contents. Almost from the moment of the book's publication in 1852, it seemed to spawn a life of its own, its pages becoming a kind of potting soil for all sorts of strange and luxuriant clambering vines: music, plays, social causes, political movements, wars.

Mightier Than the Sword, David S. Reynolds' new book is, for the most part, neither a biography of Stowe nor an exploration of her role in the struggle over slavery and abolition. It is, rather, a kind of biography of the novel itself, tracing an arc that spans two whole centuries, from Stowe's birth in 1811 to the present. In a sense, it is also a history of American culture from the era of Transcendentalism to that of television miniseries.

Reynolds—the author of similarly expansive and illuminating studies of Walt Whitman's America and the Jacksonian era, among others—makes no small claims about his subject. In his telling, Uncle Tom's Cabin did not merely spark the Civil War, it "was central to redefining American democracy on a more egalitarian basis" and also "gave impetus to revolutions in Russia, China, Brazil, Cuba, and elsewhere." He goes so far as to say, in the book's final paragraph, that Stowe's work "ushered into the world" the "spirit of interracial sympathy and true democratic justice" that culminated in the Civil Rights era of the 1960s.

Might all this be going just a bit over the top? More than a few modern scholars, as Reynolds himself notes, have minimized the impact of Stowe's novel. One recent critic called its political effects "negligible," while another asked, rhetorically, "In what sense does a novel have the power to lead a nation to battle?"

Yet one need not trust Reynolds—or Lincoln, for that matter—to become convinced of the book's astonishingly far-flung repercussions. One of the pleasures of Mightier Than the Sword is discovering that Uncle Tom's fingerprints on history are almost everywhere, attested to by a motley assortment of observers. The novelist William Dean Howells said that it "move[d] the whole world more than any other book has moved it." Lenin cited it as his favorite childhood book, declaring that it provided "a charge to last a lifetime." James Weldon Johnson recorded that it "opened my eyes to who and what I was … in fact, it gave me my being." One of America's greatest historians and civil rights advocates, W.E.B. DuBois, wrote of Stowe: "Thus to a frail overburdened Yankee woman with a steadfast moral purpose we Americans, black and white, owe gratitude for the freedom and union that exist today in the United States of America."

Nor was it only Stowe's fans who acknowledged her power. The white Southern writer Thomas Dixon, whose novel The Clansman was adapted into the film Birth of a Nation, wrote: "A little Yankee woman wrote a book. The single act of that woman's will caused the war, killed a million people, desolated and ruined the South, and changed the history of the world." (By now you may be wondering just how tall this "little" Yankee woman really was. Answer: five feet even.)

Opening Stowe's actual book after all these awestruck encomiums and blistering excoriations, a first-time reader might expect to find thunder and lightning between its covers in place of ink and paper. Uncle Tom's Cabin is not actually as turgid a work as some have made it out to be. For the most part, the story moves along briskly and suspensefully, and Stowe has an undeniable gift for creating memorable characters and vignettes: Simon Legree, Topsy, Little Eva, and the titular cabin itself. Yet much of Uncle Tom's Cabin reads like C-grade Charles Dickens, like the more preachy and sentimental stretches of The Old Curiosity Shop and Little Dorrit.

The novel's most famous scene—Eliza's escape with her baby over the ice floes of the Ohio River—fills less than two short paragraphs. Dickens (whom Stowe deplored for his frequent allusions to "spirituous drink of all sorts") would have prolonged the terror, would have made us feel the frozen blocks teetering beneath our feet, see the bloodhounds snapping at our heels, and hear the bullets whistling past our ears. Stowe sends Eliza hopscotching vaguely across to land with a thud on the farther shore, three sentences later.

So why all the fuss, then and now? In Reynolds's telling, much of the book's original appeal had to do with how Stowe blended together many disparate ingredients of antebellum culture, creating a confection perfectly flavored to tickle Victorian palates. Angelic women, adorable children, snug little houses, mawkish religiosity—all were part of the mix. Appearing at the moment of America's—indeed, the world's—first great flowering of mass popular culture, Uncle Tom's Cabin drew on minstrel shows, pulp fiction, abolitionist broadsides, temperance propaganda, and evangelical tracts. (Reynolds even speculates that Stowe may have read some of the early work of Karl Marx, which was being serialized in the New York Tribune just as she was picking up her pen.)

"By bringing together all of these strands, Stowe directed the whole range of America's favorite pop-culture images toward an assault on slavery," Reynolds writes. The radicalism of Uncle Tom's Cabin was in the way it manipulated readers into identifying with its black characters. This may not seem especially noteworthy today, but for 19th-century readers, it was nothing short of a revelation. Enslaved men, women, and children were no longer mere political abstractions, but three-dimensional human beings. In Stowe's telling, they even became archetypal American heroes, as well as Christian saints. This was especially true of Tom himself, portrayed not as a white-haired Uncle Remus (as he would be in later stage adaptations) but as a muscular man in the prime of life who is sold South and ultimately beaten to death by Legree's overseers.

"Wherever [the novel] goes," a contemporary journalist wrote, "prejudice is disarmed, opposition is removed, and the hearts of all are touched with a new and strange feeling, to which they before were strangers." Not quite everywhere, though: One day shortly after publication, Stowe's husband opened their mail to find a grisly package with a Southern postmark. It contained a severed ear cut from the head of a slave, with a note abusing the author for her defense of "D—n niggers."

But even more remarkable than the book's initial impact was its staying power. Had it been merely a topical hit, Uncle Tom's Cabin might soon have become little more than a historical curiosity, or a victim of the Civil War that it helped spark. In fact, its postbellum career was even more prolific—and, in Reynolds's telling, more fascinating—than its antebellum one. The story's many offshoots, especially the touring productions known as "Tom shows," became much better-known than the original text. By 1912, Stowe's son estimated that his mother's novel had been staged no fewer than 250,000 times, a figure that may well be too low.

Many of these productions had more in common with traveling circuses than with Stowe's appeal to conscience. One impresario touted his $5,000 pack of man-eating Cuban bloodhounds, while others one-upped this by somehow incorporating live alligators and even elephants into their stagecraft. Yet amid all this carnivalesque din, the novel's subversive message could still be heard. In the early 20th century, Southern states including Kentucky, Arkansas, and Georgia banned all performances of the Tom shows, under the justification that they fostered racial division and promulgated an inaccurate view of history.

The strangest twist in Uncle Tom's whole strange career may have come when his name became a synonym not for defiance of racism but for meek submission to it. The earliest known example of this usage, Reynolds writes, dates from 1865, when Frederick Douglass wrote that until the enlistment of colored regiments in the Civil War, most whites thought that the typical black man was "a perfect 'Uncle Tom,' disposed to take off his coat whenever required, fold his hands, and be whipped by anyone who wanted to whip him."

Yet the hero of Stowe's novel, Reynolds notes, stood not for submissiveness but for nonviolent resistance of the kind later exemplified by Martin Luther King Jr. (also derided in his day as an Uncle Tom). Even Douglass himself, whose passion for political agitation never waned, had complicated, if not contradictory, feelings. Late in life, at the Chicago World's Fair of 1893, he offered to pose onstage as Uncle Tom during a ceremony honoring Stowe.

If Uncle Tom's Cabin has lost its edge, and even seems anodyne to some readers today, this may actually be a measure of its success. In the heat of civil-rights battles, ordinary gestures—riding a bus, going to school, strolling hand-in-hand with a loved one—can become revolutionary. With victory achieved, these things become banal once more. And that, perhaps, was the entire point. 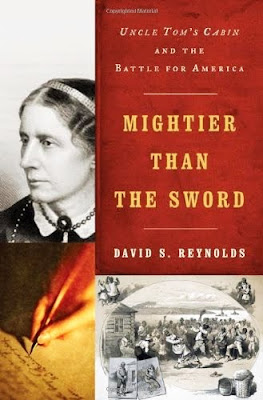 Mightier than the Sword: "Uncle Tom's Cabin and the Battle for America