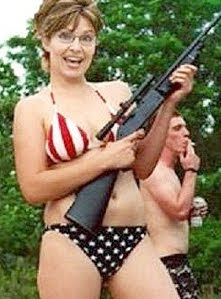 Trying to compete with the latest Harry Potter film? It probably just needed more sex and violence or maybe a wizard or two.

Critics unimpressed, but distributor undeterred as film rolls out to wider national audience

guardian.co.uk
Sarah Palin documentary The Undefeated took an estimated $65,000-$75,000 in its opening weekend at the US box office, a figure described as "soft" in some reports. Distributor ARC Entertainment demurred, suggesting a "strong" debut for conservative film-maker Stephen Bannon's Palin-backed feature, which is now expected to roll out from its limited release of 10 cinemas to a wider audience across the country.

There was less dispute about the critical reaction to the film. The Undefeated currently holds a 0% rating on the review aggregator site rottentomatoes.com, which means all of the 10 journalists who have given their verdict reviewed it negatively. Most described the film as a hagiography or an advert. The Village Voice's Anna Merlan called it "a glowing two-hour infomercial for Sarah Palin, Presidential Candidate To-Be" while the LA Times's Robert Abele described "a troop-rallying campaign infomercial as imagined by Michael Bay: hero-worshipping, crescendo-edited at a dizzying pace, thunderously repetitive and its own worst enemy as a two-hour, talking-points briefing".

The Undefeated charts Palin's rise from Alaskan "hockey mom" to vice-presidential candidate. The politician does not appear on camera, but her voice is used in the narration via clips from the audiobook version of her book Going Rogue, and her staff reportedly helped Bannon set up interviews with supporters in Alaska and conservative bloggers such as Andrew Breitbart.

Bannon himself told the LA Times that the film's release was a "high-risk strategy – one I don't remember ever being attempted – to open a documentary nationwide in such disparate markets with only four weeks prep with no media spend". He added: "It paid off. I thought $5k per screen would have been amazing ... and $10k a home run. We will be above $10k in key markets ... and all markets performed well."

Palin hinted last week that she was again seriously considering a run for the 2012 US presidency against Barack Obama. She told Fox News she might offer herself up "in the name of service," as someone with "common sense, fiscally conservative, pro-private sector policy experience and ideas that can be put to good work for this country".

Meanwhile, another documentary with a rather different take on Palin has been shot by Nick Broomfield, the British documentarian behind films such as Kurt & Courtney and Biggie and Tupac. Currently seeking distribution, it reportedly features disparaging interviews with Palin's parents, friends and former Alaska colleagues.
Posted by Mercury at 9:14 AM

Email ThisBlogThis!Share to TwitterShare to FacebookShare to Pinterest
Labels: "The Undefeated", Sarah Palin