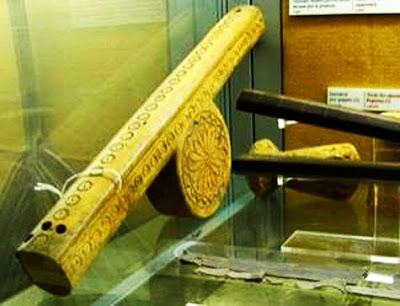 The architect Kha helped to build pharaohs’ tombs during the 18th dynasty, around 1400 BC. His own tomb was discovered intact in 1906 by archaeologist Ernesto Schiaparelli in Deir-al-Medina, near the Valley of the Kings. Among Kha’s belongings were measuring instruments including cubit rods, a levelling device that resembles a modern set square, and what appeared to be an oddly shaped empty wooden case with a hinged lid.
Amelia Carolina Sparavigna...

Kha was an architect at Deir El-Medina, Egypt, supervisor of some projects completed during the reigns of three kings of the 18th Dynasty (approximately 1440-1350 BC). Buried with his wife Merit, the items of their tomb are exposed at the Egyptian Museum, Torino. After a description of some devices of the ancient Egypt masonry (cubits, cords, plumb, levels and squares), that Kha used during his activity, I discuss an object among those found in his tomb, which, in my opinion, could be used a protractor.