Hugo Chavez...as many do, misconstrues "uberman" 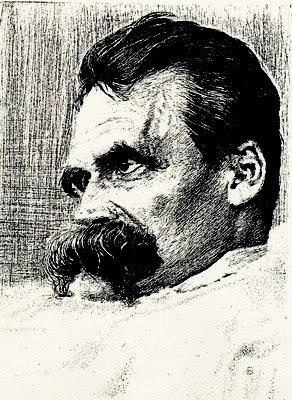 Associated Press
While he undergoes cancer treatment, Hugo Chavez has been finding inspiration rereading a 19th century philosophy book by Friedrich Nietzsche about a prophet who shows courage while trying to spread a nonconformist message.

The Venezuelan president has been so fascinated with the German philosopher's treatise "Thus Spoke Zarathustra: A Book for All and None" that he has been reciting passages in televised speeches and referring to it in postings on his Twitter account.

"Zarathustra struck me once again in Havana," Chavez said in a speech earlier this month in Caracas. He said the book popped into his mind when he was receiving treatment, and he sent for a copy.

"I asked for it and I just said: Only now you've appeared once again, Zarathustra," Chavez said. "Now you've struck me deeply, only this time you came from the hand of Fidel Castro."

The book tells a story of a prophet who after 10 years living alone in the wilderness descends from a mountain seeking to share his wisdom with humanity. He urges people not to be complacent and says he will teach them about "the overman." That term that has been translated and interpreted in various ways, but scholars generally agree it is Nietzsche's call for each individual to aspire to transcend comfortable, conformist society and become a nobler person.

"Nietzsche says the most beautiful thing about man is that he isn't an end, but a bridge between the animal and the 'super man,' the 'ultra man,'" Chavez said. He added that he sees parallels with the teachings of Jesus, the philosophy of Karl Marx and the socialist ideal of a "new man" espoused by Argentine revolutionary Ernesto "Che" Guevara.

"I'm quoting Nietzsche and also expressing my agreement with those maxims of philosophy and life: to transform the world," Chavez said.

"It's a kind of bizarre turn of events that he would be so interested in a thinker who is so virulently anti-socialist and anti-egalitarian," said Robert B. Pippin, a philosophy professor at the University of Chicago.

"What Nietzsche is just saying is that we need to aspire to a condition of humanity that is beyond the kind of conformist, bourgeois, self-satisfied, smug, boring, prosaic character of late modern life," Pippin said in a telephone interview. "It really just is an aspiration to go beyond that, to create a form of society in which independence of thought and a kind of concern with self-perfection ... would be the order of the day."

Pippin said he isn't sure why Chavez is so attracted to the book but that some clues may lie in the main character.

The fictional prophet is misunderstood and mocked, and although he cultivates a small circle of disciples does not succeed in having any mass effect, Pippin said. Instead, he said, Zarathustra has to persevere while "not having the great kind of impact on the transformation of society that he wanted to have."

Zarathustra is portrayed as someone who has to suffer for his ideas and who has "the courage to persevere no matter what the obstacles are," Pippin said. "So I would imagine something like that might appeal to Chavez. ... Maybe he's just attracted to the idea of struggle or perseverance."

Such ideas have been a common thread for Chavez, both in his calls for socialism and his own personal struggle to beat cancer. He has been in Cuba during the past week undergoing chemotherapy, which he says aims to prevent any recurrence of cancer after a tumor was extracted from his pelvic region in a June 20 surgery.

A message on Chavez's Twitter account earlier this month suggested some passages in Nietzsche's book resonate with him as battles cancer.

"I find myself before my highest mountain and my longest walk," one message read, quoting a passage. "That's how Zarathustra spoke!"

Nietzsche and the Nazis, A Personal View by Stephen Hicks, Ph.D.
Posted by Mercury at 4:47 PM