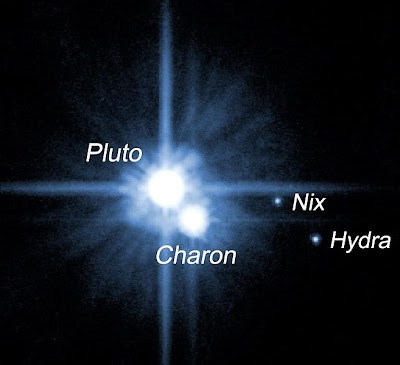 NASA
On the anniversary of the first landing of men on our moon, New Horizons mission team scientists have announced the discovery of a fourth moon around Pluto – adding to the scientific treasure trove that awaits NASA’s Pluto-bound New Horizons when it arrives in 2015.

“Could this planet get any more interesting?” says New Horizons Principal Investigator Alan Stern, of the Southwest Research Institute, Boulder Colo. “We already know that when New Horizons provides the first close-up look at Pluto in July 2015, we’ll see planetary wonders we never could have expected. Yet this discovery gives us another hint of what awaits us in the Pluto system, and we’re already thinking about how we want to study this new moon with New Horizons. What a bonus for planetary science and for New Horizons!”

A Hubble Space Telescope observing team led by Mark Showalter of the SETI Institute, Mountain View, Calif., and Douglas Hamilton of the University of Maryland, College Park, detected the new moon in five sets of Hubble Space Telescope images taken over the past two months. Astronomers are still trying to better peg orbital details on the object, designated “S/2011 P1” or “P4” until it receives a permanent name. They’ve put its diameter at between 8 and 21 miles (13 to 34 kilometers) and estimate that it travels on a circular, equatorial orbit nearly 37,000 miles (about 59,000 kilometers) from Pluto – placing the new moon between the orbits of the moons Nix and Hydra.

Signs of the new satellite in the June-July 2011 images also sent the observing team – which includes Stern, Hal Weaver of the Johns Hopkins University Applied Physics Laboratory (APL) in Laurel, Md., and Andrew Steffl and Leslie Young of Southwest Research Institute – combing though older Hubble snapshots. Knowing where to look, Weaver found strong evidence for P4 in images from June 2010. Steffl saw the same in a set taken in February 2006. Together these “archival” records add to the available suite of data needed for scientists to accurately determine the moon’s orbit.

The discovery of a fourth moon adds to Pluto’s complex and fascinating story. Discovered in 1930 by American astronomer Clyde Tombaugh, Pluto was first considered an icy oddball with a strange orbit – yet it harkened the existence of thousands of similar frozen mini-worlds in a planetary outpost known as the Kuiper Belt. Pluto’s moon Charon was discovered in 1978; it’s the largest moon in the solar system relative to the planet it orbits. (In fact, the pair orbits a common center of gravity that sits outside each body – earning it the rare status of a “double planet.”)

“Pluto continues to amaze us,” says Weaver, the New Horizons project scientist. “Who would have thought a dwarf planet could support such a complex satellite system? The hunt will now be on for similarly complex systems around other Kuiper Belt objects.”

Aside from giving the New Horizons team something to plan for and look forward to, the discovery offers a peek into Pluto’s violent past. “The discovery of this moon reinforces the idea that the Pluto system was formed during a massive collision 4.6 billion years ago,” says Weaver. “The smaller satellites, including this one, probably came together in the resulting debris disk.”

This discovery also suggests other small bodies may lurk in the Pluto system – and, if so, New Horizons should root them out when it flies by. But more “targets” might not be the best thing for the mission.“The discovery of P4 is exciting, but it also raises the possibility that our New Horizons spacecraft may enter a more hostile environment than we previously imagined,” says Glen Fountain, New Horizons project manager from APL.

“We don’t want our spacecraft running into any debris that’s still hanging around from the massive collision that spawned the formation of Pluto’s smaller satellites,” adds Stern. “For this reason we’re going to look with New Horizons, and even before we get there, we’ll be looking with Hubble and other tools, we hope.”

New Horizons launched on Jan. 19, 2006, picking up a gravity boost from (and conducting scientific investigations of) Jupiter in February 2007. The spacecraft is now more than 1.8 billion miles (2.9 billion kilometers) from Earth, on course to fly past Pluto on July 14, 2015, then on to one or more other Kuiper Belt objects in a possible extended mission. The Johns Hopkins Applied Physics Laboratory built and operates the New Horizons spacecraft and manages the mission for NASA; Stern leads the mission as principal investigator.
Posted by Mercury at 6:55 AM

Maybe a good name would be Cerberus?