Another Dawn snap of Vesta 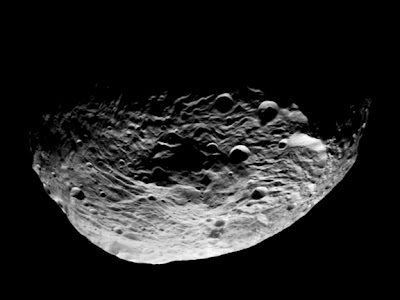 NASA's Dawn spacecraft obtained this image with its framing camera on July 18, 2011. It was taken from a distance of about 6,500 miles (10,500 kilometers) away from the protoplanet Vesta. The smallest detail visible is about 1.2 miles (2.0 km).
"Image: Vesta's South Pole As Seen From Orbit"

Jet Propulsion Laboratory
Dawn took this image while it was orbiting around Vesta, traveling from the day side to the night side. The large structure near the south pole that showed up so prominently in previous images is visible in the center of the illuminated surface. Compared to other images, more of the surface beneath the spacecraft is in the shadow of night. Vesta turns on its axis once very five hours and 20 minutes.

Dawn entered orbit around Vesta on July 15, 2011, and will spend a year orbiting the body. Next stop on its itinerary will be an encounter with the dwarf planet Ceres. The Dawn mission to Vesta and Ceres is managed by NASA's Jet Propulsion Laboratory, a division of the California Institute of Technology in Pasadena, for NASA. The University of California, Los Angeles, is responsible for overall Dawn mission science.

The Dawn framing cameras have been developed and built under the leadership of the Max Planck Institute for Solar System Research, Katlenburg-Lindau, Germany, with significant contributions by DLR German Aerospace Center, Institute of Planetary Research, Berlin, and in coordination with the Institute of Computer and Communication Network Engineering, Braunschweig. The Framing Camera project is funded by the Max Planck Society, DLR, and NASA/JPL.

Check with NASA's home page for further developments and images.