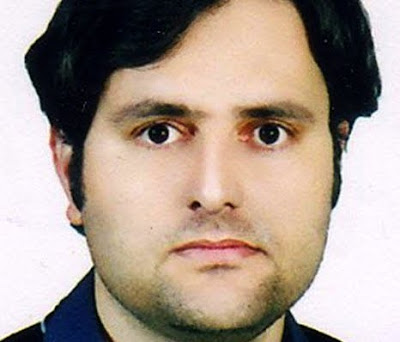 Such is espionage and politics and nuclear weapons. One begins to wonder. Is the United States or Israel involved? Did Iran do this to promote some pre-emptive strike against Israel? We may never know until PBS's Frontline gets involved.

"Nuclear scientist or student killed in Tehran? Either way, Iran blames US, Israel"

If Saturday's shooting victim was connected to Iran's atomic program, his death would be the fourth killing or attempted killing of scientists linked to the country's nuclear efforts in less than two years.

The Christian Science Monitor
Unidentified motorcycle gunmen in Tehran shot and killed on Saturday a scientist who some linked to Iran’s nuclear program.

Iran has denied initial local press reports that the shooting victim, Darioush Razaienejad, worked with its nuclear program. If he was associated with the program, his death would be the fourth killing or attempted killing of scientists linked to Iran’s nuclear program in less than two years.

Tehran says its program is for peaceful purposes, but the US accuses Iran of using it as cover for developing nuclear weapons. Iran has blamed Saturday’s killing on the US and Israel.

Mr. Razaienejad was shot as he was on his way to his child’s kindergarten, according to Iranian press reports. His wife, who was with him at the time, is in the hospital.

Razaienejad was initially linked to Iran’s nuclear program by local press, before they backed away from that statement. He is now variously described in English-language Iranian press as a professor, a scientist, and a graduate student studying power and electronics.

PressTV reports that media had initially confused Razaienejad’s name with that of nuclear physicist Darioush Rezayee. The news agency also cites “local sources” who say Razaienejad was working for the Iranian Defense Ministry.

The semiofficial ISNA news agency calls him a master’s student at Khajeh Nasroldeen Toosi University. According to The New York Times, ISNA also reported that an official in the Tehran governor’s office said it was unclear whether Razaienejad was a nuclear scientist, and that it was “under review.”

Whatever Razaienejad’s affiliations, Iran’s speaker of the parliament, Ali Larijani, said the assassination was “another example of American-Zionist animosity against Iran,” reports the semiofficial FARS news agency. He also “advised American officials to think well about consequences of their actions.”

The killing comes less than a year after two scientists associated with Iran’s nuclear program were targeted by motorcyclists who planted explosives on their cars.

One, a professor of nuclear engineering, was killed in the November attacks. The other, Fereydoon Abbasi, survived, and is now head of the country’s Atomic Energy Association. Iran blamed the Israeli, American, and British intelligence agencies for the assassinations. In January of 2010, another scientist, Mahmoud Ali Mohammadi, was also killed in a bomb attack, which Iran said was carried out by agents working for Israel’s intelligence service.

The New York Times reports that since Mr. Abbasi was appointed head of Iran’s Atomic Energy Agency, Iran has hastened the rate of production of highly enriched uranium, a nuclear fuel. Abbasi announced in June that the nation would triple its production of uranium enriched to 20 percent purity, which it says it needs for a medical reactor.

Experts say that once the 20 percent enrichment rate is reached, attaining the 90 percent level needed for nuclear weapons is relatively easy. But according to the Times, Obama administration officials, while acknowledging the quickening pace of enrichment, say that Iran’s reliance on older centrifuge models slows its progress.
Posted by Mercury at 6:58 AM