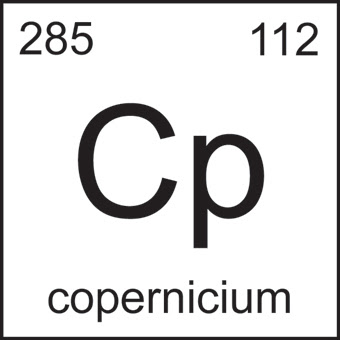 PHYSORG.com
IUPAC (International Union of Pure and Applied Chemistry) accepted the name proposed by the international discovering team around Sigurd Hofmann at the GSI Helmholtzzentrum. The team had suggested "Cp" as the chemical symbol for the new element. However, since the chemical symbol "Cp" gave cause for concerns, as this abbreviation also has other scientific meanings, the discoverers and IUPAC agreed to change the symbol to "Cn". Copernicium is 277 times heavier than hydrogen, making it the heaviest element officially recognized by IUPAC.

The suggested name "Copernicium" in honor of Nicolaus Copernicus follows the tradition of naming chemical elements after merited scientists. IUPAC officially announced the endorsement of the new element's name on February 19th, Nicolaus Copernicus' birthday. Copernicus was born on February 19, 1473 in Toruń, Poland. His work in the field of astronomy is the basis for our modern, heliocentric world view, which states that the Sun is the center of our solar system with the Earth and all the other planets circling around it.

An international team of scientists headed by Sigurd Hofmann was able to produce the element copernicium at GSI for the first time already on February 9, 1996.

Using the 100 meter long GSI accelerator, they fired zinc ions onto a lead foil. The fusion of the atomic nuclei of the two elements produced an atom of the new element 112. This atom was only stable for the fraction of a second. The scientists were able to identify the new element by measuring the alpha particles emitted during the radioactive decay of the atom with the help of highly sensitive analytical procedures.

Further independent experiments confirmed the discovery of the element. Last year, IUPAC officially recognized the existence of element 112, acknowledged the GSI team's discovery and invited them to propose a name.

Copernicium is the sixth chemical element GSI scientist named. The other elements carry the names Bohrium (element 107), Hassium (element 108), Meitnerium (element 109), Darmstadtium (element 110), and Roentgenium (element 111). 21 scientists from Germany, Finland, Russia, and Slovakia collaborated in the GSI experiments that lead to the discovery of element 112.