Amy Bishop...and so the evaluation begins 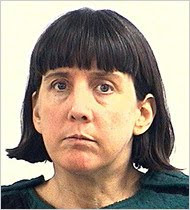 This article does ask and probe some interesting questions...ethics, justice, revenge, analysis of genius and madness,

"A Murder Suspect’s Worth to Science"

The New York Times
Amy Bishop, neuroscientist, inventor, murder suspect, has become bigger than life, a symbol for those who think that genius is close to madness, or that women cannot get ahead in science, or that tenure systems in universities are brutalizing — or even that progress against fatal diseases is so important that someone like Dr. Bishop should be set free to pursue cures.

At least that is what emerges from hundreds of comments on the Internet about Dr. Bishop, the assistant professor at the University of Alabama in Huntsville charged with shooting six colleagues — three of them fatally — at a faculty meeting on Feb. 12.

“Perhaps the saying ‘There’s a fine line between genius and insanity’ has a lot of truth to it,” George from Pennsylvania wrote at nytimes.com.

Many posted comments like this: “I do not approve of what Dr. Bishop did, but I understand her frustration.” Being denied tenure “in spite of her contributions past and future,” the writer added, “is sufficient to provoke a murderous rage against the chairman and the university.”

And on a forum devoted to amyotrophic lateral sclerosis, or A.L.S., commonly known as Lou Gehrig’s disease, a person wrote: “I hope they turn her loose again. Sounds like she knew what she was doing in A.L.S. That’s more than we have now.”

In fact, scientists who have looked at Dr. Bishop’s résumé said they saw no evidence of genius, no evidence of a cure for diseases like A.L.S., no evidence that she even could have gotten tenure at a major university.

Most of her work was on nitric oxide, a gas that can transmit signals between nerves. High levels of nitric oxide, she proposed, might set off degenerative diseases like A.L.S., and cells treated with low levels of the gas might build resistance. But that is far from proven, scientists said, and the idea was not original with Dr. Bishop.

R. Douglas Fields, chief of the nervous system development and plasticity section at the National Institute of Child Health and Human Development, said of Dr. Bishop’s work, “I don’t think it was groundbreaking — quite the opposite.”

She had nothing published in 2007 and 2008, and during her six years at the university in Huntsville she published three papers that appeared to be original research articles, none of them in major journals — often a requirement for tenure.

Christopher E. Henderson, co-director of the Columbia University Center for Motor Neuron Biology and Disease, noted that in Dr. Bishop’s published papers, her name did not appear in the last position, which ordinarily designates the senior author.

Dr. Michael L. Shelanski, chairman of the department of pathology and cell biology at Columbia, said that while standards might vary at other universities, “we would not hire her nor would she be recommended by the department for tenure.”

One 2009 paper, was published in The International Journal of General Medicine. Its publisher, Dovepress, says it specializes in “open access peer-reviewed journals.” On its Web site, the company says, “Dove will publish your paper if it is deemed of interest to someone, therefore your chance of having your paper accepted is very high (it would be a very unusual paper that wasn’t of interest to someone).”

As for her invention of an automated system to grow cells in the lab, which would be a very expensive substitute for petri dishes, scientists said they saw no need for it and would not even want to automate the sort of hands-on work that drew them to science in the first place.

So what is going on? Why did people who knew Dr. Bishop only through reading about her crime make excuses for her?

Jonathan D. Moreno, a professor of medical ethics and the history and sociology of science at the University of Pennsylvania, thinks reactions have to do with a long tradition that goes back to Plato. The idea, he said, is that someone who is very intelligent is assumed to be “morally wise.” And that makes it hard to reconcile the actions of Amy Bishop, with her Harvard Ph.D., her mantle of scientific brilliance.

“There’s a common-folk psychology,” Dr. Moreno said. “If you are that smart, you know the difference between right and wrong.”

“That is what’s going on,” Dr. Moreno said. “In cases like hers that contradict the framework, we look for excuses.”

[Side note. When searching for a selection of photographs, it appears that Google has eliminated all of Amy Bishop. The above photo was supplied by The New York Times.]

Also use the blog's search engine and enter the key word "tenure".