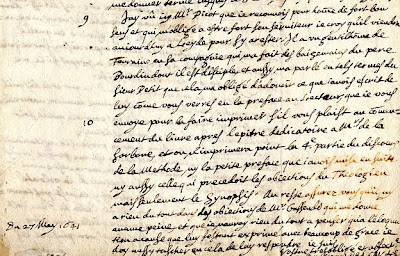 How bizarre. Just the other day I noted the surfacing of Thesaurus Hieroglyphicorum and now one of Rene Descartes' missing letter is discovered.

"Descartes Letter Found, Therefore It Is"

The New York Times
It was the Great Train Robbery of French intellectual life: thousands of treasured documents that vanished from the Institut de France in the mid-1800s, stolen by an Italian mathematician. Among them were 72 letters by René Descartes, the founding genius of modern philosophy and analytic geometry.

Now one of those purloined letters has turned up at a small private college in eastern Pennsylvania, providing scholars with another keyhole into one of the Western world’s greatest minds.

The letter, dated May 27, 1641, concerns the publication of “Meditations on First Philosophy,” a celebrated work whose use of reason and scientific methods helped to ignite a revolution in thought.

The document, experts say, reveals just how much Descartes tailored his writings to answer his contemporary critics. Frequently suspected of heresy, Descartes sent copies of his arguments to well-known theologians to gauge their opinions and answer their objections within his text.

If old-fashioned larceny was responsible for the document’s loss, advanced digital technology can be credited for its rediscovery. Erik-Jan Bos, a philosophy scholar at Utrecht University in the Netherlands who is helping to edit a new edition of Descartes’s correspondence, said that during a late-night session browsing the Internet he noticed a reference to Descartes in a description of the manuscript collection at Haverford College in Pennsylvania. He contacted John Anderies, the head of special collections at Haverford, who sent him a scan of the letter.

“This was exhilarating,” Mr. Bos wrote in an e-mail message. “Seeing Descartes’ handwriting appear on my screen took my breath away.”

Descartes, the author of “Cogito, ergo sum” — “I think, therefore I am” — spent two decades living in Holland. Mr. Bos’s research is part of a large project sponsored by the Netherlands Organization for Scientific Research.

It turns out the letter had been donated in 1902 to Haverford’s library by Lucy Branson Roberts, whose husband, Charles Roberts, was an avid autograph collector. He had bought the letter without knowing that it was stolen.

As soon as Haverford’s president, Stephen G. Emerson, understood the letter’s history, he contacted the Institut de France (coincidentally on Feb. 11, the anniversary of Descartes’ death in 1650) and offered to return the item. “I was frankly shocked because I didn’t know we had the letter at all,” said Mr. Emerson, who was a philosophy major in college. “But it’s really not ours.”

Scholars have known of the letter’s existence for more than 300 years, but not its contents. Apparently the only person who had really studied it was a Haverford undergraduate who spent a semester writing a paper about the letter in 1979. (Mr. Bos called the paper “a truly fine piece of work.”)

Gabriel de Broglie, chancellor of the Institut de France, an organization that manages thousands of donations and foundations, described the letter as “a wonderful discovery for science.”

Delighted by the college’s offer, Mr. de Broglie awarded Haverford a prize of 15,000 euros (slightly more than $20,000), writing to Mr. Emerson that the offer “honors you and exemplifies the depth of moral values that you instill in your students.”

France has recovered only 45 of the 72 stolen Descartes letters, Mr. de Broglie explained. One was offered at an auction in Switzerland in 2006 and 2009. “After I protested vociferously and publicly on both occasions in the name of the Institut, the letter didn’t find a buyer,” Mr. de Broglie wrote, “but it proved impossible for us to raise the very large sum that the seller demanded, and even though it can’t be sold, this 1638 letter remains in private hands.”

The letters were among thousands of documents stolen by Guglielmo Libri, an Italian count and mathematician who served as secretary of the Committee for the General Catalog of Manuscripts in French Public Libraries in the 1840s. After learning that he might be arrested, Libri fled to London in 1848 with a collection of 30,000 books and manuscripts, including those by Descartes, Galileo, Fermat, Leibniz, Copernicus and Kepler and other scientific and mathematical giants.

Claiming to be a political refugee, Libri was welcomed in Britain even though French courts eventually convicted him in absentia in 1850 and sentenced him to 10 years in prison. Libri raised money by selling his collection, and put a total of 7,628 lots up for sale at two auctions in 1861.

To Mr. Bos, the most important information in the four-page letter written in French is in the last paragraph, which “shows that at a very late stage in the printing process, Descartes changed the outlook of the Meditations dramatically.”

In that passage Descartes instructs Father Marin Mersenne, a close friend who was overseeing the book’s publication, “Neither the fourth part of the Discours de la méthode, nor the little preface I put in next, nor the one preceding the theologian’s objections, must be printed, but only the Synopsis.”

In his e-mail note, Mr. Bos explained that “the reason for those changes is that a French visitor has convinced Descartes of the good intentions of Pierre Petit (1598-1677), who had been very critical on part 4 of the Discourse — criticism about which Descartes was extremely upset. Now that he knows that Petit changed his mind, Descartes has no reason to react to him personally — in the new preface he limits himself to a few general remarks about the criticisms that reached him concerning the Discourse, without naming anybody.”

Mr. Bos added that the letter would be published in a collection later this year.

Mr. Emerson of Haverford said he planned to deliver the document personally during an award ceremony at the Institut in June. And no, he isn’t planning to check the letter in his luggage.
Posted by Mercury at 12:30 PM