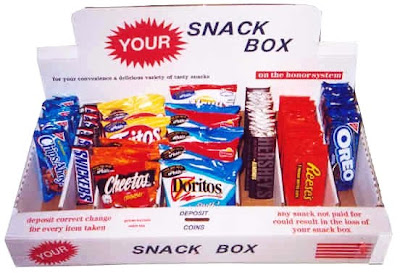 You have seen and probably used one of these...an unattended snack box where payment is on the honor system. Well, the same can be understood in the following story...sort of an invisible ethical administrator.

"The Temptation to Cheat in Computer Science Classes at Stanford"

The New York Times
In January, on the first day of the Computer Science 106A: Program Methodology course at Stanford University, Eric Roberts, the professor, began with his customary admonition: Cheat, and you will be caught. And, he added: Cheat, and your classmates will suffer. More weight will be given to the final exam when calculating the final grade.

These are not idle threats in a department where it may be easy to cheat (cut, paste some code, voila!) but it is just as easy to detect cheating. (It is the computer science department, after all). Jay de la Torre, a senior, was caught and has been suspended this quarter as part of his punishment. Mr. de la Torre was taking the computer science class for a second time in his junior year when he cheated. After he was disciplined, he resigned from his position as student body vice president in November, The Stanford Daily reported.

“I wasn’t even thinking of how it easy it would for me to be caught,” he said.

Cases in which students borrow code in computer-science classes make up a disproportionate share of the honor-code violation situations heard by the university’s judicial panel. Last year, according to a new report, cheating incidents in computer science classes accounted for 22 percent of the total honor-code violations, The San Jose Mercury News reported. Historically, the computer science department accounts for between 20 to 60 percent of all honor-code cases, even though the courses represent about 7 percent of student enrollment.

Most of the violations come from introductory classes like CS 106A. About 1,000 students will have taken the course by the end of the year, with more than 75 percent of students passing through a computer science introductory course before the end of their time at Stanford.

“There is a perception that cheating is going to be a lot harder to detect than they think it is going to be,” said Professor Roberts, who wrote a paper in 2002 on the “strategies of using technology in the teaching of ethics.”

“Programs are idiosyncratic as sentences and no two are alike,” he said. “They are not even comparable if they are independently generated. It’s particularly easy to detect if they’ve been copied.”

Stanford’s honor code was established in 1921 and states that students will not plagiarize, copy work or get outside help. The computer science department currently employs a computerized watchdog, a software program that scans a student’s code on homework assignments. It compares the assignment not only with other students’ work but also with assignments turned in from previous years. Even with that deterrent, which most students are well aware of, Professor Roberts conceded that the nature of computer science assignments made it easier to cheat — some copying, pasting and added keystrokes could often be sufficient for those hoping to beat the system.

Perhaps the temptation to cheat is even stronger in computer science than other disciplines, said R. J. Walsh, a computer science major and a teaching assistant in the department. “CS is not like an English paper where you can just turn it in and there’s not a way to say if it’s a good paper or not,” he said. “At 3 a.m, you can be looking a program and definitively say that it’s not going to work.”

The number of honor code violations have prompted Professor Roberts to implement a new system. Describing this method as a “collective incentive” for students to maintain academic standards, the professor said he will add 5 percent for every honor-code violation in his class to the weight of the final exam, which is currently 15 percent of the class grade.

In other words, if one person cheats, the whole class will face more pressure on the final exam, because it will make up a greater portion of a person’s grade. Whether the scorn of fellow students is a bigger deterrent to cheating than being personally disciplined by the university remains to be seen.

Mr. de la Torre said that in retrospect, cheating wasn’t worth it. “It didn’t allow me to show what I was capable of,” he said. “It caused me to question myself as a person.”

But in an interview, Jack Dubie, a junior majoring in computer science, said that students taking introductory courses might be more vulnerable to the temptation.

I’m a CS major, and I know that if I copy someone’s code I will get caught. If you look at intro classes versus upper-level classes, there is a higher incidence of cheating people that are not CS majors — the ones that are new to the field and potentially find themselves being in a situation where they can’t handle the assignment. People arrive at Stanford with the same expectations as they had in high school. Not wanting to fail might push them to cheat. I would guess that most of these academic plagiarism cases will happen in the lower-level courses.
Posted by Mercury at 6:16 PM