The Los Angeles Times
Are you ready for a trip down the rabbit hole? Tim Burton, Johnny Depp and Disney are adding a strange new chapter to the Lewis Carroll classic with their "Alice in Wonderland," a film that presents a young woman who finds herself in the world of the Mad Hatter, the Cheshire Cat and the Red Queen. She is welcomed as a returning visitor -- but is she, in fact, the same Alice who roamed the trippy realm as a child? Time will tell. Here at the Hero Complex, we're counting down to the film's March 5 release with daily coverage.

Should the Cheshire Cat's grin make us reconsider the nature of reality? Can Humpty Dumpty make words mean whatever he says they mean? Is Alice a feminist icon?

Those are a few of the questions in"Alice in Wonderland and Philosophy: Curiouser and Curiouser," a book by William Irvin, a philosophy professor at King’s College in Pennsylvania, who has made a specialty of using pop culture to frame his classroom approach.

He took the idea to the bookshelf with in 1999 as editor of "Seinfeld and Philosophy: A Book about Everything and Nothing" and then again, with bestselling results, with "The Simpsons and Philosophy: The D'oh of Homer" in 2001. More books followed, using "The Matrix," Metallica and "The Terminator" as the lenses for examining philosophical topics. Books on “True Blood,” “Mad Men” and “30 Rock” will be released later this year, while the "Wonderland" collection just hit shelves timed to exploit the arrival of Tim Burton's cinematic trip down the rabbit hole .

“Philosophy seems kinda dry and dusty to people," Irvin said, "But everyone is interested in popular culture. We found a way to communicate that to students and the general public by meeting them halfway. For example, ‘The Simpsons’, is one of the most popular shows on college campuses for a long run. That would get students interested in a hurry.”

"Wonderland" is an especially good fit for the series because academics have been making references to Carroll's work for a century.

“Lewis Carroll himself was a sort of philosopher," Irwin said. "Even though he’s writing a children’s book, a lot of the things that are fun for children are philosophical -- nature, the difference of appearance vs. reality. “It’s really engaging in ‘Alice.’ It’s done in a very engaging and intellectually charged way and leads a nice logical puzzle in a way.”

Richard Brian Davis, an associate professor of philosophy at Tyndale University College and Seminary who co-edited the "Alice" book, said the heroine provides a lasting image of feminism.

“Alice does bend the rules on a number of levels, it’s still Victorian England," Davis said. "The role of women in society is still pretty limited. Lewis Carroll is really exploding that myth completely with Alice. We wanted to tap into that. We wanted to latch onto a figure, and we couldn’t think of anybody better. Alice is better than any Disney princess. You might think of a woman who competes on men’s terms so she’s not marginalized. I think Alice goes beyond that. The question is rather 'Can you out-think men.' All through that book, you will see her out think men on every level. I think she’s a much better role model than someone who exercises just sheer power, unlike the Queen of Hearts. This is the kind of woman that a philosophy professor would want his daughters to grow up like.”

Irwin said he hopes to release an “Avatar and Philosophy,” book in the series soon.

“It’s hugely popular and it raises philosophical questions," Irwin said. "It’s the kind of thing that after seeing it they talk about it, and want to keep talking about it. So we take it as the opportunity to want to talk about philosophy." 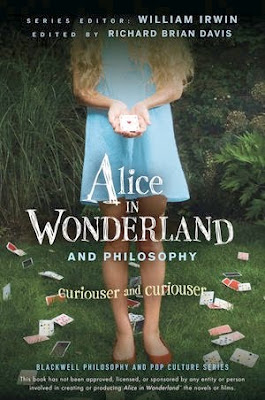 Alice in Wonderland and Philosophy: Curiouser and Curiouser