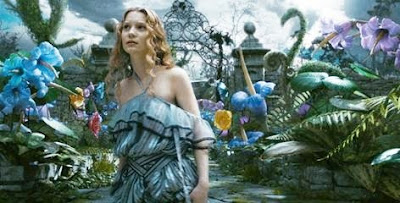 Lewis Carroll's Alice In Wonderland is not a normal narrative or a simple story and I will be pleased to see how Burton "fills in the gaps".

USA TODAY
Alice in Wonderland's most perplexing riddle isn't the one posed by the Mad Hatter at the tea party: "Why is a raven like a writing desk?"

Instead, the real stumper is this: Given the enduring appeal of Lewis Carroll's Victorian-era literary masterwork, why hasn't there ever been a wholly satisfying film or TV adaptation based on Alice's fateful tumble down the rabbit hole?

But few come close to overcoming the fact that the tale has no plot to speak of, relies heavily on clever wordplay and features a mind-blowing menagerie that perhaps is best captured by a reader's imagination.

The latest stab at solving the puzzle, however, benefits from modern-day digital magic. And it's the fruit of a creative partnership between one of animation's ace storytellers, who once conjured the Maurice Chevalier of candelabras, and a visually astute Hollywood wizard known for his way with the odd and unusual — especially his frequent star, Johnny Depp.

As perfect pairings go, writer Linda Woolverton (Beauty and the Beast) and director Tim Burton aren't exactly Tweedledum and Tweedledee. But as collaborators, they hope to have cracked the conundrum that has plagued others when Disney's new 3-D Alice in Wonderland lands in theaters March 5.

"I knew more about these iconic characters from music and illustrators than from the stories," says the filmmaker, who has given the Burton treatment to such book-based works as Sleepy Hollow and Charlie and the Chocolate Factory. "The problem is, they're interesting, but there's not a lot of narrative drive. Every version I've seen falls into the same category: A precocious girl meets a bunch of weirdos. The Disney cartoon is probably the best known and least successful."

Burton agreed to direct the sumptuous fantasy — with a budget estimated at $250 million because of its blend of live action and computer animation — after hearing it was in 3-D and then reading Woolverton's script.

"Her whole point was to focus and frame it, to explore what Alice is about," he says. "It didn't need more bells and whistles. It needed grounding."

It was Woolverton who flashed on the idea of exploring a 19-year-old Alice, who, when she's feeling pressured into an unwanted engagement and grieving over the death of her father, again escapes to the whimsical land she once dreamed about when she was 6.

Says the writer, "At first, the question I was answering was, 'What if she went back?' Not how I would re-adapt the material." That came only after she pondered the problems inherent in the source material's structure: "It's an incredible book. The characters are remarkable and unforgettable. I fall to my knees before Lewis Carroll, but Alice is a girl who doesn't change. There is no real jeopardy. There is no emotion, really."

She relied on such time-tested tactics as mixing details found in Alice's Adventures in Wonderland and its 1872 sequel, Through the Looking Glass.

The less-bellicose Queen of Hearts and the belligerent Red Queen are merged into one royal pain: Helena Bonham Carter's big-headed brat of a ruler.

But Woolverton also added a splash of swordplay action and a sense of menace by borrowing from Carroll's nonsense poem, Jabberwocky. It gave the usually passive Alice a chance to not only save the day but also to determine her own destiny. The girl-powered underpinnings were not unlike those the writer gave to Belle, the bookworm heroine of Beauty and the Beast andliberator of future Disney fairy-tale females.

Similarly, Alice is no longer the curious flaxen-haired lass in the blue pinafore. Instead, she is on the brink of womanhood and sadly has lost her sense of self — or "muchness," as Woolverton calls it: "The death of her father took something from her." No coincidence that the writer lost her own father at age 19.

Dark amid the light

Wonderland — or, rather, Underland as it is now known — has also fallen on hard times. While lush fields of overgrown exotic foliage, giant topiary beasts and plump mushrooms greet her arrival, there also are patches of scorched ruins and signs of decay — the result of the Red Queen's aggressive campaign to snatch the throne from her younger sister, Anne Hathaway's slightly daft White Queen.

When Woolverton learned Burton was to direct, she says she did "that happy dance" — which in Underland means a "futterwacken," a sort of herky-jerky jig with a few hip-hop moves that she invented for the film.

"I have a limited visual imagination," she says. "(Burton) sees the world in a very unique way and then he sort of invites you in. I found that a great invitation."

Some of the more macabre touches in the PG-rated fantasy that feel authentically Burton-esque, however — such as those bobbing noggins afloat in a moat (the result of the Red Queen's oft-repeated command: "Off with their heads!") or when an attack by the ferocious Bandersnatch is halted when his eyeball is plucked — actually sprang from Woolverton's fertile brain.

Instead, the director concentrated both on helping the screenwriter further develop the characters so they were as dimensional as the surreal images that popped off the screen (who knew the Red Queen could almost be sympathetic if given a sibling-rivalry back story?) as well as overseeing the complex technical aspects behind the camera.

"This was really the opposite of the way I usually make a movie," Burton says; the post-production involved inserts of characters, props, sets and backdrops. "I shoot for six months or longer and cut it. This all materialized at the very end."

Though the live-action portions were filmed on location in England, the 2,500 or so shots that required computer-generated and manipulated images were done in a green-screen-filled environment at Culver City Studios in Los Angeles.

"I prefer being on sets," says Burton, who built Willy Wonka's entire candy empire on soundstages for 2005's Charlie and the Chocolate Factory. "And all that green screen makes you ill after a while. We all got green fever. The crew went nuts."

Of course, such disorientation is perfect for a trippy walkabout through Wonderland.

The filmmaker, who got his start in Disney's animation department, also made sure the characters, both real and computerized, were able to seamlessly share the same space. "We tried to avoid that big DreamWorks style and not over-animate the animal traits."

These days, no Burton film is complete without an indelible performance by Depp — this is their seventh film together — and there is more going on under his Hatter's chapeau than simply madness. Namely, a wild mop of red frizz. Whereas Depp's interpretation of Wonka was partly based on kid-show TV hosts like Captain Kangaroo and Mister Rogers, the flame-tressed Hatter was inspired by an orange-haired hall of fame that director and star slapped together.

"Their photos were all on a video monitor and I had to take them down, they were so disturbing," Burton says. "Bozo, Carrot Top, Mason Reese (a child actor who did TV ads in the '70s) and that guy from Room 222 who had the Afro." And don't forget Olympic snowboarder Shaun White, aka The Flying Tomato. The desired overall effect on Depp's Hatter? Says Burton, "I was going for a combination of Bozo and The Exorcist."