An essay on "landline' phones 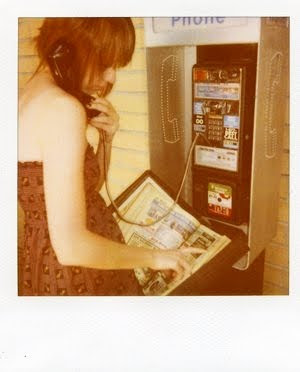 I doubt that the cellular phone will eliminate the landline phones. The technology is still there and needed.

"Listening In on a Pay Phone in Queens"

The New York Times
Benjamin Patir called his son because he was lonely and, perhaps more important, because he had a quarter. Robert J. Covelli called his son, too, to find out if, at some point during the more than 24 hours he spent in custody, he had become, for the first time, a grandfather. Frank Federico, fresh from a courthouse jail cell, called his mother, who spared him any lectures and asked him if he needed a ride home.

The three men used the same curbside pay phone on a busy block of Queens Boulevard last week. So did Carlos Luciano, who lent his cellphone to his wife. And Alex Santana, who bought a banana to get change. And Marvin McCain, a subway conductor trying to call in sick, and two men uninterested in giving their names or explaining why, at midnight on a neon-lit stretch of Kew Gardens, Queens, they had to make a call.

Everybody knows the public pay phone is dying, but nobody inclined to watch this one would believe it. It sits across the street from Queens Criminal Court, on a patch of sidewalk facing Fast & Fresh Supermarket Deli & Grocery. In the age of the iPhone and the BlackBerry, in a city where cellphones are cheaper and more plentiful than toasters, the pay phone outside Fast & Fresh is outdated, outnumbered, outperformed.

Yet this grimy phone — in a silvery booth that Superman would have skipped over, for it is doorless and not fully enclosed — survives and, in its own nickel-and-dime way, thrives.

In seven days last week, more than 100 people deposited a total of $52 in the phone, at 25 cents per call. Last month, hundreds of people put in a total of $210 worth of coins. Those who stepped into the booth last Thursday and Friday provided a snapshot of New York’s pay phone user, an elusive, rather anonymous demographic sometimes viewed with suspicion.

They were mostly men, as young as 18 and as old as 62. They were Hispanic, black, white, Arab. Several said they were unemployed and could not afford a cellphone. Others owned a cellphone, but did not have it for one reason or another. For many, there was nothing suspicious about whom they dialed and why: They called their mothers. The machine served not so much as a lifeline, but as a simple landline, with life.

Mr. Patir, 59, pulled a quarter from a pocket. He happened to be walking by the phone booth when he decided to call his son. He has been out of work for five years, ever since his stroke, and he said he ran out of money to pay his cellphone bill two weeks ago. Asked why he called from that phone at that moment, he replied, “Loneliness, loneliness, loneliness.”

Mr. Patir’s son did not answer. He left a message. “I just asked him why nobody think about me,” he said. “Nobody calls me.”

The booth provides something more than advertising space or shelter from the elements. It offers anonymity. And deniability.

“Nah,” one young man who made a call insisted, “you didn’t see me use that phone.”

Frank Federico, 34, stepped into the booth. He had just been released from custody from the criminal courthouse. His cellphone was not as lucky. It was still back at the police precinct, where he was processed after being arrested the day before for heroin possession. “I do drugs,” Mr. Federico said frankly. “I got caught with them.”

While Mr. Federico talked with his mother, standing behind him was Jishan Alam, 18, waiting to call his brother after also being released from custody. Mr. Alam, a student at Borough of Manhattan Community College, said he was stopped by the police for walking between subway cars and then arrested because he had failed to appear for a previous traffic ticket.

Mr. Federico asked Mr. Alam for a quarter. Mr. Alam had none, but he handed him a dollar and told him to keep it, and the two of them walked to Fast & Fresh to get change and use the phone.

Queens Criminal Court is the booth’s biggest customer. It sits with its back to the courthouse at the edge of the curb — “Phone” in blue letters across the top —between 82nd Road and 83rd Avenue. People rush out of their arraignments, head down the courthouse steps, cross Queens Boulevard, hop the fence on the traffic median and call their relatives or friends, repeating one basic message over and over again: Come pick me up, I’m out.

No one lingers very long, because no incoming calls are accepted. The recently released from jail were a population that was easy to spot in the frigid cold last week. Many appeared to have been arrested without their coats or had had their jackets confiscated, because they emerged from the courthouse dressed in thin shirts, and they shivered as they stood in the booth.

The Queens Boulevard pay phone is one of 16,358 on the city’s sidewalks, according to the Department of Information Technology and Telecommunications, the city agency that regulates them. The total has steadily decreased as cellphone usage has proliferated — 33,335 in 2000, 28,971 in 2004, 16,358 today. There are thousands more inside bars, restaurants and private buildings that the city does not regulate.

Verizon, which owns many, though not all, of the city’s pay phones, operates about 7,000 on the sidewalks and another 18,000 in subway stations and buildings.

Alex Steiner said the Queens Boulevard phone is one of the busiest of the 810 pay phones he co-owns with a partner, Dennis Danforth. Though they have had to pull out 500 phones that were not generating enough business in recent years, they remain optimistic.

“Cellphones have not killed the business,” said Mr. Steiner, 62, the former president of the Independent Payphone Association of New York. “It certainly has reduced it.”

Back at the Queens Boulevard pay phone, Mr. Federico and Mr. Alam finished their calls and wandered off. The booth was empty for only a minute or two before the courthouse sent it another client.

From 9 p.m. Thursday to 1 a.m. Friday, only one person used the phone, Alex Santana, 37. He came from the courthouse, said he had been arrested on a charge of unlawfully soliciting a passenger for a cab ride at the airport and had called a friend to ask him to drive him home to Brooklyn.

This is not to say the booth was lonely. All day and night, people walk by the booth, holding cellphones to their ears. Tim Barr, 30, had ducked inside earlier and stood with his back to the receiver, talking to his best friend on an iPhone. Others used the booth as a wind barrier to light cigarettes. The body of the phone and the black metal tray below took on an unintended role as coasters, for coffee cups and a can of Budweiser in a paper bag.

Robert J. Covelli, 46, dialed a number and put the receiver to his ear. The earpiece had a small crack running through the black plastic, and so many hands have grasped its spine that the yellow-and-blue sticker running down it reading International now just spells national.

Mr. Covelli did not have time for hello.

“I’m out, baby,” he said into the phone. He had just left the courthouse, where he was taken after being arrested about 3 p.m. the day before. It was a long, complicated story, involving, he said later, an unpaid traffic ticket and the fact that he did not have his wallet or identification on him when the police stopped him as he was walking in Jamaica, Queens.

He needed at least a handful of quarters to dive into every detail — the phone’s mirrored faceplate listed local calls at three minutes for 25 cents — so Mr. Covelli kept it short as he spoke to his son. “I didn’t have I.D. on me,” he told him.

He hung up, turned around and stepped toward Fast & Fresh but then stopped and returned to the phone. He called his mother. “Ma! Ma!” he said, but she did not pick up. He bought a cup of coffee and a pastry from the store, and then stood a moment outside by the phone to catch his breath.

His son’s wife was about to have a baby. “She’s having five-minute contractions,” said Mr. Covelli, who lives on Long Island and works as a survey inspector for a title insurance company. “I’m on my way home. He just told me she’s in pain. It’s coming. It could be at any given minute.”
Posted by Mercury at 9:00 AM