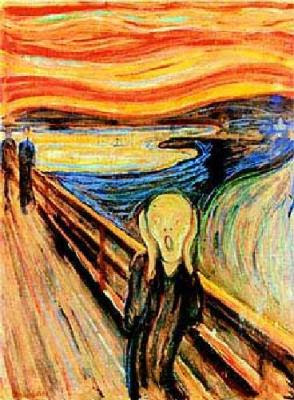 TIMESONLINE
A team of art sleuths has turned to astronomy and mathematical formulas to crack a string of historical conundrums posed by the works of Shakespeare, Chaucer and Van Gogh.

This week the experts will share evidence from 50 “cases”, including the exact time at which the Dutch artist painted "Moonrise", a canvas that was once thought to have portrayed a sunset, and details about the blood-red sky in "The Scream" by Edvard Munch.

The scientists from Texas State University have identified the “same star that’s westward of the pole” in the opening scenes of Shakespeare’s "Hamlet" as the Tycho star or supernova of 1572.

A mysterious flood cited by the franklin in Chaucer’s Canterbury Tales — a tide so high “it seemed that all the rocks were away” — has been linked to a freak tide in Brittany, northern France, on December 19, 1340.

The findings will be presented on Friday at the annual convention of the American Association for the Advancement of Science in San Diego.

The Texas scientists are led by Donald Olson, a professor of physics and astronomy, who has applied his disciplines to solve mysteries in art, history and literature.

They will be joined in San Diego by Christina Young, from the Courtauld Institute in London, who has researched how the tension of an artistic canvas can be a key to its ageing and conservation.

Art historians had long struggled to pinpoint when Vincent Van Gogh painted his Moonrise. It portrays a wheat field enclosed by a stone wall with an orange orb passing behind a mountain range. Scholars originally knew the work as "Sunset" until they realised the orb was the moon.

Olson led his team to Saint-Rémy-de-Provence in the south of France to discover that all the painting’s distinct features still existed together with a monastery window from which Van Gogh painted.

Using lunar cycles, Van Gogh’s letters, computer calculations, topographic maps, aerial photographs and weather charts, they deducted that there were only two dates — May 16 and July 13, 1889 — when astronomical conditions would have produced such a view.

The golden colour of the wheat in the painting sealed it and the art detectives knew it had to be July 13. To cap that, they concluded that the moon would be in its pictured position behind an overhanging cliff at 9.08pm local time. “The moon spent only two minutes passing behind that overhanging cliff,” Olson said. “Van Gogh would have seen exactly what’s in the painting at exactly that time.”

The team has used similar methods to date other paintings by the artist.

Olson has also claimed that the sky in "The Scream" is coloured not by Munch’s mood but by volcanic dust that spread around the world after the volcano Krakatoa erupted in 1883. He calculated that Munch painted an early version of his most famous work from a hill called "Ekeberg" in Oslo when he saw the dust in the sky.

Among Olson’s current projects is research with academics from Birmingham University to use solar geometry to calculate the times at which Claude Monet, the French impressionist, painted his pictures of London’s Waterloo bridge and Charing Cross bridge from the Savoy hotel in 1900-01.

“First you have to identify the spot where the artist stood and we believe we have tracked down the room at the Savoy where he stood. It had a balcony in those days,” said Olson. “Then, using the sun angles, we can calculate the time he did the paintings to within about 10 minutes.”

Van Gogh's mystery star at the White House
Posted by Mercury at 6:19 AM