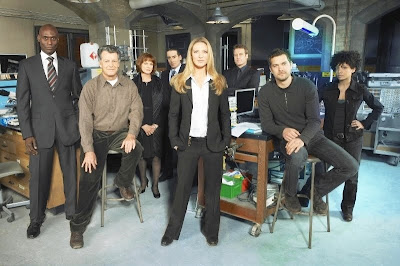 I admit that I viewed the first half of season one and gave up on the nonsense...it's pure science fiction and loves to indulge in stereotypical characters especially the scientist [Dr. Walter Bishop] and the dramatic twisting of scientific apparatus...remember the mind probe of the nearly naked Olivia Dunham [Anna Torv]. Dr. Bishop is dripping in images and characterization of a recluse scientist stuffed in a basement on Harvard's campus and given a blank check for all sorts of lab equipment [including a bovine]. Who is really mad...Dr. Bishop or the financial department of Harvard? Okay, the program can be entertaining if good science and epistemology is suspended and full realization that such venues are strictly for entertainment. But the following article is quite sad when a California Institute of Technology physicist [Sean Carroll] entertains the non-empirical concept of parallel universes. This simply is not good science. Sure, enjoy the series as science fiction and not as a true representation of scientific knowledge.

"Fringe Finale Bends, But Conserves the Laws of Physics"

Last week, we proved that Fringe's genetically-targeted toxin wasn't completely impossible during "The Bishop Revival." But during the show's winter finale, "Jacksonville," Fringe pushed the envelope with a rip that sends two dimensions colliding in horrific ways. We talk with physicist Sean Carroll of the California Institute of Technology to see if Fringe can boast facts for a second week.

Popular Mechanics
In this week's "Jacksonville," a building damaged by one of a series of tremors occurring in Manhattan has more than just a few cracked ceiling panels. The Fringe team arrives in the city just in time to discover that something has scrambled the atoms of the building along with everything and everyone inside.

It's a gruesome scene with bodies strewn about, but it's the fact that the dead have literally been fused together that really makes the case bizarre. What would provide a source of energy so powerful that it could alter the state of the atoms in the room?

According to Walter Bishop, a rip between the barriers of two parallel universes could do just that. Everyone is stunned (aside from Olivia Dunham, who as a child was experimented on by Walter and partner Dr. William Bell). During her tests, Olivia was the only child able to identify objects from "the other side." And though the team races to repeat experiments that caused Olivia's childhood "seeing" ability, somewhere, another building in Manhattan is set to disappear to the other side.

Apparently, the Fringe theory appealed to a golden rule of physics: Mass and energy are conserved. If something was taken from one side, there must be something given (either in mass or energy form) in return to restore balance, an idea Sean Carroll, California Institute of Technology physicist and author of, From Eternity to Here: The Quest for the Ultimate Theory of Time, says is an interesting one.

"Energy does not simply appear or disappear in the world," Carroll says. "Now we don't know that even if alternate universes existed, that you could actually travel between them. Therefore we don't know what the rules are."

But he says it's not crazy to think that if an alternate universe did exist, and you could travel there, that there would be some conservation rule that says you have to give as much as you took. He does note, however, that it does not make sense that the energy taken would not have to be given back immediately, saying that as soon as energy was transferred from one universe to another, there would be a need for instant balance.

"As far as making up laws of physics, I think this was actually a pretty respectable effort," he says, "but energy can't just disappear. You can't break that law of physics. So if you break that one law, you can't really ask what would happen otherwise."

But what of Olivia's ability to "see" objects from the alternate universe based on their energy alone?

Not likely, says Carroll, who notes that even energy from other planets is the exact energy that comprises life here on earth. Still, if there really were an entirely different universe, perhaps the laws of physics could be different, too.

"The forces of nature could be different. The way that energy manifests itself and moves around could be dramatically different from universe to universe," Carroll says. "However, the two universes in the show are almost exactly the same. There is a match for each person in the alternate universe, so in that case I think that the energy that would show up would be almost exactly the same."
Posted by Mercury at 7:12 AM