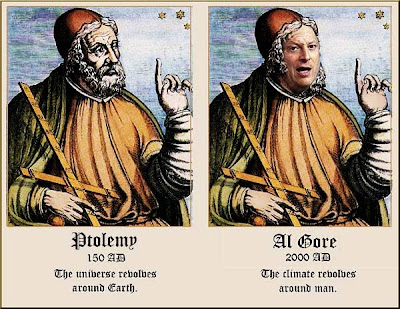 Will this right the wrongs and re-establish good science? Maybe. There is already a backlash towards Al Gore and followers.

"Independent Board to Review Work of Top Climate Panel"

REUTERS
An independent board of scientists will be appointed to review the workings of the world’s top climate science panel, which has faced recriminations over inaccuracies in a 2007 report, a United Nations environmental spokesman said Friday.

The board’s work will be part of a broader review of the body, the Intergovernmental Panel on Climate Change, said Nick Nuttall, a spokesman for the United Nations Environment Program, who spoke on the sidelines of an international meeting of environment ministers here.

The Intergovernmental Panel on Climate Change has been under fire since it was pointed out that the 2007 report included a prediction that Himalayan glaciers would vanish by 2035, although there is no scientific consensus to that effect.

That brief citation — drawn from a magazine interview with a glaciologist who says he was misquoted — and sporadic criticism of the panel’s leader have fueled skepticism in some quarters about the science underlying climate change. The climate panel’s assessments are a crucial source of guidance for policy makers addressing global warming.

But mainstream scientists and the United Nations have said repeatedly that the evidence that human activity is a major factor in global warming remains unshaken.

Mr. Nuttall said the review body would be made up of “senior scientific figures” who could perhaps produce a report by late summer for consideration at a meeting of the climate panel in October in South Korea.

He said that several countries had made clear at the meeting here in Bali that they would prefer that the review panel be appointed by an independent group of scientists rather than the climate panel. He said that plans for assembling the panel would be announced next week.

“I think we are bringing some level of closure to this issue,” Mr. Nuttall said.

One area to be examined is whether the panel should incorporate so-called gray literature, a term to describe nonpeer-reviewed science, in its reports.

Many scientists say that such material, ranging from reports by government agencies to respected research not published in scientific journals, is crucial to seeking a complete picture of the state of climate science.

Achim Steiner, executive director of the United Nations Environment Program, told reporters here this week that he did not support a ban on the use of gray literature and that the news media had overblown the climate panel’s missteps.

hahahaha....who is funding? what does Las Vegas have to say about it?