50s nostalgia and the atom 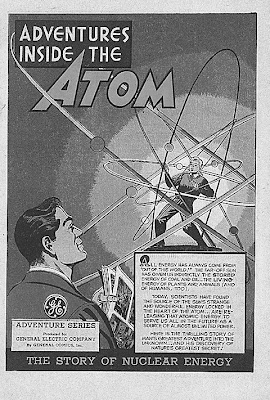 This is what Inventing Green [Alexis Madrigal] website posted...

I tell you this up front because it’s true: if you love energy and 50s naivete, you are going to love Adventures Inside the Atom, GE’s nuclear power propaganda comic.

It tells the “thrilling story of man’s greatest adventure in the unknown…and his discovery of nature’s greatest secret” through a nice Platonic dialogue between Ed, a besuited company man, and his eager beaver learner, Johnny. It is also hilarious.

The action starts with old Democritus, the original atomist, in Greece being told that he is “a fool” by a guy in a tanktop.

Then, we learn all about Einstein and Neils Bohr before we get to the Manhattan Project, which features this terrifying drawing of faceless bots creating “a tremendous new industrial city to separate U235 from its chemical twin, U238.”

But then things turn a little lighter and cheerier and more civilian. We hear that this tremendous power will be the greatest thing ever. It’s the pure, childlike heart of nuclear technoptimism shining through. And, honestly, it’s kind of sweet. “Golly, I can see it all now,” is a statement straight from the heart of an entire generation of “nukes,” as they called themselves. The panel on the right — what Johnny can see — is actually Eskimos watching TV inside a well-lit, comfortable igloo with a toaster. (Really? Yup.)

It ends with the panel at the top of this post, Ed telling Johnny he’s “facing a wonderful future” as they stride into the mysteriously glowing General Electric headquarters in Schenectady, New York, on which it is written in all caps THINGS TO COME.

I offer this somewhat sarcastic write up not because I think nuclear power has no place in our power generation mix, but merely to show that as far back as 1948, General Electric was putting a lot of chips on the nuclear bet. Why? They had an engineering know-how advantage because they’d worked with the military during and after the war on military atomic projects.

“The companies sought to transform their competitive advantages in the nuclear field into extraordinary profits (realized quasi-rents),” writes Steven Cohn in Too Cheap to Meter. “In particular they sought to capitalize on their relative monopoly on military reactor design experience; marketing advantages due to existing client relationships with the utilities and and federal energy bureaucracy; and greater access to nuclear scale, vertical integration, and learning curve efficiencies.”

General Electric and Westinghouse were convinced that if nuclear power took off, they’d be sitting pretty. Where anti-nuclear activists have been unkind has been to impute all sorts of nasty motives to the GE and Westinghouse folks. We should remember that the middle of the century was a time where both regular people and big corporations often felt that what was good for the big company was good for America. The country had an enormous industrial workforce — a lot of it part of “Big Labor” — that needed places like GE to work. We’d also just come out of a war in which national industrial capacity really meant something. The world was not globalized to the extent that it is now or even was by the late 70s. It was, as Robert Reich termed it in Supercapitalism, The Not Quite Golden Age.

A few decades later, though, statements like this one from G.E.’s 1972 annual report, were starting to stick in the collective American craw.

“Our potential revenue base in a nuclear plant, for example, is some six times that of a fossil fuel plant because we can supply the reactor, the fuel, and fuel re-loads, as well as turbine generators and their auxiliary equipment.”
As Evan O’Neil pointed out this week, too, GE also made appliances, so if they could lock people into a very high-energy lifestyle, the consumers would gobble up space heaters and air conditioners, which would then require more nuclear plants to supply the electricity, and so on. And what was the best way to lock people into high-energy lifestyles? Convince them that the power they were using a lot would be very cheap, so how much you used didn’t really matter.

The nuclear dream was the lynchpin of a half-century long attempt to provide power and convenience for the American public, redeem the horrible “success” of the atomic bomb, and enrich the companies that had helped the war effort. Though activists scored a lot of bodyblows pointing this tripartite plan out, looking at the comic, let’s be honest: GE wasn’t hiding much. Their own propaganda telegraphed just how big their plans were for commercializing atomic power. I bet the Eskimos in that last panel have a freezer… with ice cubes in it.

Putting out comic books to win the minds of the kids made sense, too, because the game was that big and it would have that many innings. GE’s executives knew it could play out over their entire careers and until their children had children. If they were in the atomic power division in the late 40s, it probably did, although certainly not as triumphantly as hoped.

Adventures Inside the Atom