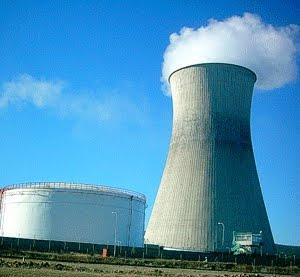 By the time this is a done deal Obama will have gray hair and whiskers. Design plans are not complete, legal suits are pending, and there will certainly be congressional foot dragging as well as a cadre of those that are against this decision.

The New York Times
President Obama told an enthusiastic audience of union officials on Tuesday that the Energy Department had approved a loan guarantee intended to underwrite construction of two nuclear reactors in Georgia, with taxpayers picking up much of the financial risk.

If the project goes forward, it would be the first nuclear reactor built in the United States since the 1970s.

In a speech in Lanham, Md., Mr. Obama announced government approval of an $8.3 billion loan guarantee to help the Southern Company build two reactors in Burke County, Ga., near Augusta.

The new aid for the nuclear power industry serves many of the Obama administration’s objectives, helping broaden support for its energy policy proposals, which face obstacles in Congress; helping control emissions of greenhouse gases; and to some extent bolstering employment and domestic energy production.

Mr. Obama said, “Make no mistake: whether it is nuclear energy, or solar or wind energy, if we fail to invest in these technologies today, we’ll be importing them tomorrow.”

But these reactors were designed by Westinghouse, a subsidiary of Toshiba, and many major components will be fabricated abroad. And nuclear power is of limited use in offsetting oil imports.

In a conference call with reporters, the energy secretary, Steven Chu, compared the reactors to coal plants, not oil, saying how much they would reduce carbon dioxide and sulfur dioxide output.

The announcement, which had been signaled in advance, drew prepared praise from the nuclear industry and criticism from antinuclear groups.

The new plants are far from a done deal; the design is not yet fully approved.

Southern Company applied two years ago to the Nuclear Regulatory Commission for permission to build and operate the reactors, adjacent to its Vogtle 1 and 2 reactors. The company hopes to win a license late next year.

The loan guarantees were authorized by the 2005 Energy Policy Act. If the reactors are built and operate profitably, the borrowers will repay the banks and pay a fee to the federal government in exchange for the guarantee; if the borrowers default, the federal government will repay the banks. Critics have argued that the chance of default is very high, and the loans have been delayed by protracted negotiations over what the fee should be.

The 2005 act provided $18.5 billion in guarantees, but Mr. Obama proposed earlier this month to triple that amount. The guarantees can cover up to 80 percent of the estimated project cost, although some builders may ask for less. Southern asked for 70 percent, but the project may also be eligible for loan guarantees from the Japanese government.

The Energy Department is negotiating with potential borrowers for three other projects, two of which could win guarantees soon. The Scana Corporation and Santee Cooper want to build a nuclear plant in Jenkinsville, S.C., and UniStar is planning a reactor in southern Maryland, adjacent to the Calvert Cliffs reactors. A third project, in Texas, is in some doubt because of rising cost estimates and a suit between the project partners, NRG, of Princeton, N.J., and the municipal utility serving San Antonio.

The United States has 104 operating power reactors, but all the reactors ordered after 1973 were canceled, and dozens were abandoned after substantial construction.

Southern would like to build a model called the AP 1000, standing for “advanced passive,” with passive safety systems that minimize the need for pumps and valves. But the design by Westinghouse is not complete; the Nuclear Regulatory Commission recently ruled that one structural component, which was intended to protect against crashing aircraft, might not survive earthquakes. The goal of Westinghouse, the commission and potential builders is to have a completed design before a license is issued.
Posted by Mercury at 3:51 PM