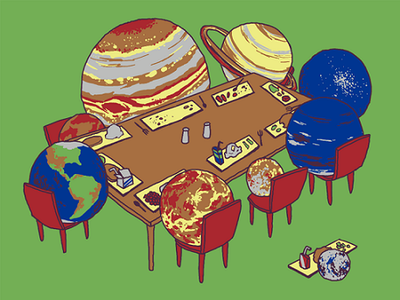 Yesterday was the anniversary of the discovery of Pluto.

"The 80th Anniversary of an Underdog Named Pluto"

76 years later, astronomers at the 2006 meeting of the International Astronomical Union voted to demote the planet to a mere dwarf planet because it didn't meet the newly established criteria for planetdom. Way to make the school children cry, scientists! My Very Energetic Mother Just Served Us Nine... what? Nine slaps to the memory of my elementary school education?!

On the plus side, the explosive response to the decision led to the creation of a white-hot word du jour. "Plutoed" was named the 2006 word of the year by The American Dialect Society.

For example, Remember when Sheriff Mike Corona plutoed two of his deputies for saying mean things about him?

At the time of the downgrade, Bob Menn, astronomy educator at the Santa Ana College Planetarium, was writing, producing and editing a radio show for 4M, an astronomy community sponsored by the Irvine based Meade Instrument Corporation. Meade Radio interviewed Tombaugh's wife Patricia, then 94 years old, to ask if she thought he was spinning in his grave.

"She thought Clyde would understand that things change, and he would also probably be very happy because this has made Pluto much more important than it was," said Menn. "Suddenly everyone is talking about Pluto and it has become a very big issue. Now everybody loves Pluto. It's the superstar of our solar system, so to speak"

So, here's to all the underdogs out there in the universe; be like Pluto. Don't let the current nomenclature define how brightly you shine at this point in the space-time continuum. It could change anytime, and you (are a) rock anyway!

Enter "Pluto" in the blog search engine for more articles.
Posted by Mercury at 8:28 AM