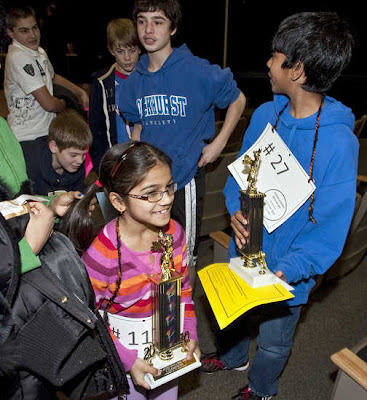 This would be a spelling bee first...sister winners.

Vanya Shivashankar, 8, won the 2010 Olathe Spelling Bee today and will compete in the Scripps National Spelling Bee in Washington, D.C.

The third-grader from Regency Place Elementary School is the younger sister of Kavya Shivashankar from Olathe, who won the 2009 Scripps National Spelling Bee.

She competed against 43 spellers, who had qualified by winning their local school bees. Vanya won in the 36th round of the bee, which was in the auditorium of Frontier Trail Junior High School. She correctly spelled the word “arrondissement” that runner-up Ashwanth Samuel misspelled and then spelled “apparatchik” for the win.

This is the second year in a row that Ashwanth, a seventh-grader at Prairie Trail Junior High School, finished in second place. Last year, he went out in the 16th round, and Kavya won the Olathe bee.

The 2008 runner-up, Erica Chang, a seventh-grader at Frontier Trail Junior High School, participated in this year’s bee after missing the bee in 2009. She took third place, going out in the 17th round.

The bee is sponsored by The Olathe News.