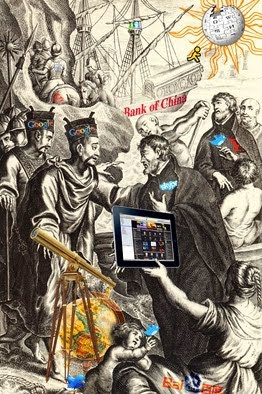 More like a titanic stranglehold and a last ditch effort by the Chinese Communist Party. Time will tell, but I imagine that the politics of an emerging China will change and become more democratic.

China often views the ideas of foreigners, from missionaries in the 17th century to 21st-century Internet entrepreneurs, as subversive imports. The tumultuous history behind the clash with Google.

The Wall Street Journal
In 1661, Adam Schall, a Jesuit missionary from Germany and astronomer at the Chinese imperial court, fell victim to jealous mandarins, and was sentenced to death for teaching false astronomy and a superstitious faith. He was only just saved from being strangled, when a sudden thunderstorm convinced his judges that nature had spoken against their verdict. Father Schall died soon after. But the defensiveness of the mandarins, who saw his foreign ideas as a threat to their status, would be a recurring theme in Chinese relations with the outside world.

So, is it true after all, what they say about clashing civilizations? It is tempting to see the official Chinese response to Hillary Clinton's speech on Internet freedom in that light. Spurred by Google's announcement that it might pull out of the Chinese market in protest over censorship, Mrs. Clinton talked about Internet freedom in terms of universal human rights. Her speech was promptly denounced in a Communist Party newspaper as "information imperialism." Foreign Ministry spokesman Ma Zhaoxu claimed that China's regulation of the Internet (banning references to Tiananmen, Tibet, Taiwanese independence and so on) was in keeping with "national conditions and cultural traditions."

The claim of universality is indeed an important facet of American culture, rooted in the American Revolution and Protestant ethics. It is considered proper for a U.S. secretary of state to give voice to the ideal of universal human rights. Just so, a Chinese official sees it as his duty to assert the uniqueness, or even superiority, of Chinese culture. This was true of Confucian scholar-officials in the imperial past. It is still true today.

Thought control, in terms of imposing an official orthodoxy, is a very old tradition. The official glue that has long been applied to hold Chinese society together is a kind of state dogma, loosely known as Confucianism, which is moral as well as political, stressing obedience to authority. This is what officials like to call Chinese culture.

One can take a more cynical view, of course, and see culture as a mere fig leaf meant to hide the machinations of political power. The latest Chinese salvo against the U.S., blaming the Americans for instigating rebellion in Iran through the Internet, reveals that the current spat has a hard (and opportunistic) political core. And the assumption that Google, as a Chinese editorial put it, is a "political pawn" of the U.S. government, is a clear case of projection.

In any case, instilling the belief that obedience to authority is not just a way to keep order, but an essential part of being Chinese, is highly convenient for those who wield authority, whether they be fathers of a family or rulers of the state. That is why in their efforts to promote democracy after World War I, Chinese intellectuals denounced Confucianism, with its rigid social hierarchy, as an outmoded orthodoxy which had to be eradicated.

It was, as we know, not so much eradicated as replaced by a Communist orthodoxy after 1949. And when this orthodoxy began to lose its grip on the Chinese public after the death of Chairman Mao in 1976, Chinese officials struggled to find a new set of beliefs to justify their monopoly on power. The ideological hybrid that followed Maoism was "Socialism with Chinese Characteristics," a mixture of state capitalism with political authoritarianism. Later, Confucianism actually made a comeback of sorts. But the most common ideology since the early 1990s is a defensive nationalism, disseminated through museums, entertainment and school textbooks. All Chinese schoolchildren are indoctrinated with the idea that China was humiliated for centuries by foreign powers, and that support of the Communist state is the only way for China to regain its greatness and never be humiliated again.

This is why foreign criticism of Chinese politics, or Chinese infringements of human rights, is denounced by government officials as an attack on Chinese culture, as an attempt to "denigrate China." And Chinese who agree with these foreign criticisms are treated not just as dissidents but as traitors. The term "information imperialism" is clearly designed to evoke memories of the Opium Wars and other historical humiliations. Chinese are meant to feel that foreigners who talk about human rights are doing so only to bash China.

This is not always entirely irrational. If Chinese chauvinism is defensive, American chauvinism can be offensive. The notion that the U.S. has the God-given right to impose its views about liberty and rights on other countries, sometimes backed by armed force, has provoked precisely the same reaction in many places as Napoleon's wars for Liberty, Fraternity and Equality once did. No matter how fine the ideals, people resent it when they are pushed down their throats. Besides, the Chinese are not alone in mixing politics with morality. The history of Christian missions in Asia, or indeed Africa, cannot be neatly separated from imperialism; they were indeed often part of the same enterprise. Even scientific ideas, such as astronomy or medicine, which might be considered to be neutral, came with values that were anything but. The earliest missionaries in China, such as the great Italian Jesuit Matteo Ricci (1552-1610), introduced science as part of their aim to spread the Christian faith.

In fact, there is an interesting parallel between those early Christian missions and our contemporary efforts to spread universal human rights, especially in regard to China. Ricci and his colleagues, as Jesuits, believed that the best way to influence the Chinese elite was to adapt to Chinese culture, to wear Chinese clothes, to speak in Confucian terminology, to "go native," as it were. They were criticized by other Catholic orders, who saw this as a shameless betrayal of Christian principles. Only the true faith should be preached, with no compromises to heathen views.

A very similar debate is going on today between those who believe that applying Western notions of human rights and democracy to China is counterproductive. Many a politician, businessman or media tycoon has argued that adapting to special Chinese conditions is surely more effective if one wishes to have any influence in China. The fact that this argument is usually self-serving does not make it necessarily wrong, but so far it has certainly not been proven right. Chinese human rights have not been noticeably advanced because of foreign compromises with Chinese illiberalism.

The dilemma for the Chinese elites, ever since the early Christian missions, is the question of how to adopt useful Western ideas while keeping out the subversive ones. Intelligent Chinese knew perfectly well that much of Western knowledge (how to construct effective guns, say) was not only useful but essential as a way to make China strong enough to resist foreign aggression. But the tricky part for scholar-officials was how to use that knowledge without weakening their own position as guardians of Chinese culture.

To mention just one example, greater knowledge of geography and other civilizations made it harder to maintain that China was the center of the world which should naturally be paid tribute to by barbarian states. In ancient times, foreign barbarians were ranked with the beasts. By the time Matteo Ricci, in 1602, showed the Chinese a world map (now on view at the Library of Congress), some foreigners were treated with more respect, but the old Sino-centric defensiveness had far from vanished. If the Middle Kingdom was no longer the perfect model of civilization, its traditional political arrangements became vulnerable to domestic challenge.

One way of dealing with this problem was to separate "practical knowledge" from "essential" culture, or ti-yong in Chinese. Western technology was fine, as long as it didn't interfere with Chinese morals and politics. In practice, however, this was not feasible. Political ideas came to China, along with science, economics, and Western religion. And they did help to undermine the old established order. One of these ideas was Marxism, but once Mao had unified China under his totalitarian regime, he managed for several decades to insulate the Chinese from notions that might undermine his power.

Once China opened up to the world for business again in the late 1970s, under the leadership of Deng Xiaoping, the old problem of information control emerged once again. Deng and his technocrats wanted to have the benefit of modern economic and technological ideas, but, like the 19th century mandarins, they wished to ban thoughts which Deng called "spiritual pollution." The kind of pollution he had in mind was partly cultural (sex, drugs and rock 'n' roll), but mainly political (human rights and democracy).

Deng's attempt, which was only partly successful, was made far more difficult by the invention of the Internet, the problems and possibilities of which were left for his successors to deal with. The Internet, which has boomed over the last few years, cannot be totally policed; there are simply too many ways to dodge the censors. But China, with its army of cyberspace policemen, has been remarkably effective at Internet control, by mixing intimidation with propaganda. The intimidation encourages self-censorship, and nationalist propaganda creates suspicion of foreign criticism. It is not hard to find well-educated Chinese who buy the line about "information imperialism."

On the other hand, there are also plenty of Chinese who have applauded Google's defiance of the authorities. When hackers, operating from China, targeted the Gmail addresses of Chinese human rights activists, Google decided that it would no longer help to police online information. As the Google CEO Eric Schmidt put it this week at Davos, where he repeated his criticism of Chinese censorship of the Internet: "We hope that will change and we can apply some pressure to make things better for the Chinese people." Even as government spokesmen criticized the US for interfering in Chinese affairs, hundreds of Chinese Internet users laid flowers at Google offices in Beijing, Shanghai and Guangzhou. This is why it is too simplistic, and even noxious, to see the conflict over Internet freedom simply as a cultural clash. Those who would like to enjoy the same freedoms that people in democracies take for granted are Chinese too.

The question, then, for Western companies, as much as for Western governments, is to decide whose side they are on: the Chinese officials who like to define their culture in a paternalistic, authoritarian way, or the large number of Chinese who have their own ideas about freedom. Google has made its choice. It strikes me as the right choice, for not only will it encourage a healthy debate on freedom of information inside China, but it could serve as a model of behavior for companies operating in authoritarian countries. Even for enterprises aimed at maximizing profits, it might sometimes pay to burnish their image by being on the side of the angels.

[Ian Buruma is the Henry R. Luce Professor at Bard College. His latest book, Taming the Gods, will be published in March.]

Thanks to POSP stringer Tim for the article.
Posted by Mercury at 8:10 AM