50 years and no aliens 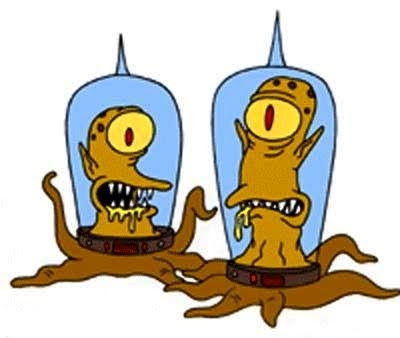 50 years of searching for the faintest signal from an alien life form and we have ZIP. It is a futile attempt and fortunately the U. S. Government is no longer involved. Suppose the contact were established...then what. Distance would be a real problem especially since the universe is expanding. And if that were not an issue suppose they didn't like humans and eliminated the species.

COSMIC LOG
Scientists have been keeping watch for alien signals for 50 years, but haven't heard anything. Why? Maybe we haven't been looking long enough ... maybe the aliens aren't out there ... or just maybe we're totally missing signals that are being transmitted in a way we didn't expect.

One thing's for sure: The search for extraterrestrial intelligence, or SETI, touches upon one of the deepest questions of human existence. Here's how the late Lee DuBridge, science adviser to presidents, put it in a famous quote: "Either mankind is the most advanced intelligence in the galaxy; or not. Either alternative is mind-boggling."

The leading lights of SETI science reviewed 50 years of a mind-boggling quest over the weekend in San Diego at the annual meeting of the American Association for the Advancement of Science - and previewed some way-out ideas that could become reality 50 (or 500) years from now.

The wizard of Ozma

The SETI era got its start on April 8, 1960, when astronomer Frank Drake pointed a radio telescope into the skies over West Virginia and looked for patterns in the signals received. The effort, known as Project Ozma, was put together on a shoestring budget. "All of this cost $2,000," he recalled during the AAAS seminar.

Drake and his colleagues turned up nothing of extraterrestrial origin, although there was a short-lived thrill of excitement when they came across some intriguing signals that they later found out were military transmissions. That set the pattern for the half-century that followed. Although SETI astronomers have been teased by one-time-only events such as the "Wow" signal, there have been no confirmed messages from E.T.

Some astronomers say that in the grand scheme of things, 50 years isn't all that long, and the effort expended so far hasn't been all that exhaustive. "I think we have not yet begun to search," said Peter Backus, an astronomer at the SETI Institute in California's Silicon Valley.

But the technology is getting better all the time. "Fifty years ago, Frank Drake would never have imagined the directions in which SETI has moved," said Jill Tarter, director of the institute's Center for SETI Research (and the scientist who inspired the main character in the "Contact" book and movie).

Latest and the greatest

The latest and the greatest SETI search is in its beginning stages at the Allen Telescope Array in Northern California, a $50 million, 42-dish network that is being operated 24 hours a day to look for alien signals ... and do other radio-astronomy experiments as well. Eventually, those 42 dishes could grow to 350, resulting in a sensitivity and resolution comparable to that attained by the 1,000-foot-wide Arecibo Observatory in Puerto Rico.

The only problem is that SETI astronomers tend to use our own technological capability as a yardstick to estimate what the aliens should be capable of - and the current trend suggests that the more advanced a civilization gets, the less we'd hear from them.

For instance, Drake pointed out that television transmissions used to be sent out with 18 megawatts of power. "That was one of the prime signs of our existence," he said. But thanks to advances in signal technology, those power levels have been reduced to 5 megawatts.

Then you have to consider that more and more transmissions are being directed downward to Earth from telecom satellites, instead of upward from terrestrial transmitters. That could reduce the signature of Earth's radio emissions from millions of watts to mere watts of reflected power.

"What's happening here is that the earth is growing quiet," Drake said. "If we are the model for the [intelligent] universe, that's bad news."

SETI searchers would have to trust that other civilizations would be sending out intentional signals - using either old-fashioned radio or perhaps ultra-short pulses of light.

When astronomers look for light signals, in a relatively recent strategy known as optical SETI, they have to assume that E.T. is directing a powerful beacon at targets around the cosmos. Fortunately for those astronomers, doing optical SETI can be about as inexpensive as Project Ozma was 50 years ago.

"Two thousand dollars and a smart graduate student, and you can be in the SETI business," Drake observed.

Astronomers are working on more expensive strategies as well: One idea that's been around for quite a while calls for putting a radio observatory on the far side of the moon, virtually the only place in the solar system that is perpetually shielded from terrestrial transmissions.

Another way-out strategy would be to set up a monitoring station far from the sun - maybe 500 to 1,000 times as far away as Earth. At that distance, the sun could focus light waves (and radio waves) from cosmic frontiers like a giant lens.

"We could well have an Internet for the galaxy, based on gravitational lenses," Drake said. Berkeley astronomer Dan Wertheimer, one of the scientists behind the SETI @ home alien-hunting screensaver program, said observers at such a gravitational-lens observatory could "read the license plates on an extrasolar planet."

And if things get too quiet on Earth, as Drake suspects, that might be just a temporary situation. The deployment of space solar-power satellites would involve sending gigawatts' worth of power down to Earth, and some of that energy would be reflected back into space. "If we go this route, the earth will become visible again," Drake said.

But would that be a good thing? Would we really want the aliens to know we exist, or should we lie low? That's a completely different story.

Use the blog's search engine and enter relevant key words.
Posted by Mercury at 5:57 PM