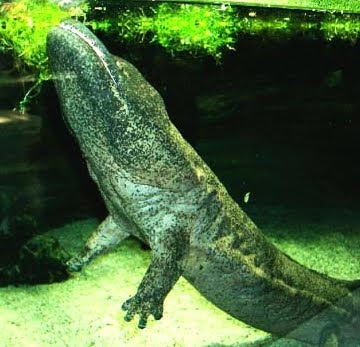 And where does the Japanese giant salamander fit into biodiversity?

BBC NEWS
As we pull into Toyohira, an unusual and unexpected welcome committee is lined up ready to receive us.

The group of primary-age children breaks into a song about the bonds of friendship between human and salamander.

"It's everyone's friend," they warble through the chilled afternoon air.

A small river burbles its accompaniment - a river flowing past their school, which contains along its length a number of concrete structures designed to make sure the Japanese giant salamanders, or hanzaki, are still around by the time the next generation of children stands in the same spot and sings the same song.

The "hanzaki holes" are a key conservation tool in a land where many rivers are now sculpted not by nature, but by the hand of man.

When I ask Professor Masafumi Matsui from Kyoto University, a leading Japanese authority on all matters amphibian, to name the single biggest modern threat to this animal that has been around roughly unchanged since the time of the dinosaurs, he answers without demur: "The construction of dams and roads, which destroys the habitats".

"We can't do without constructing such things; and [the habitat] will be cut upstream and downstream."

Many Japanese rivers are now, in reality, canals - boxed in concrete, guided down valleys to keep floodwaters away from homes and secure a supply to the irrigation systems.

To breed, hanzaki need to find nesting dens in the riverbanks. Without dens, there will be no more hanzaki; hence the holes.

And while the idea of a concrete nest might not seem very appealing to the human constitution, the salamanders themselves seem OK with it.

Lifting the lid on one of the dens, we see the rear half of a big, mature male. Its head is poking through a small connecting tunnel into the river, where it can protect the nest from any would-be usurpers.

The breeding plan appears to be working; along the river we can find larvae just a few months old, and presumably some at least have sprung from these nests.

But is this real conservation?

Is keeping the species alive with such a surgical strike a valid substitute for the much wider restoration of these concreted channels that would also help everything else in the ecosystem?

"Obviously in these kinds of managed landscapes you do need to do some management, and what they've been doing here in these artificial nests and so forth is a tremendous management approach," says Claude Gascon, an amphibian specialist with Conservation International.

"But obviously that's not sufficient, and you do need to protect some of these natural habitats, these watersheds, in their natural form so that you're protecting all of the needs of this animal, which is a tremendous animal."

Move a curious finger down the Red List of Threatened Species, and the factor you see more often than any other as a cause of decline for just about every kind of creature - amphibians, birds, mammals - is precisely what is facing the Japanese giant salamander: loss of habitat.

Its sister species in China, by contrast, must contend most urgently with the wiles of poachers - hardly surprising, when the meat from an adult giant salamander can fetch upwards of $1,000 on the black market.

Hunting has brought the Chinese giant salamander to the unwelcome status of Critically Endangered.

In former times, the Japanese salamander was hunted too.

After protection was conferred in the 1950s, some bright spark had the idea of importing the Chinese species, farming it, and supplying the meat demand that way.

In the inevitable way of these things, the idea quickly proved a busted flush. But the Chinese animals escaped; and though the farm itself is long gone, the once farmed salamanders are thriving.

With Masafumi Matsui and his team of assistants - one sporting the perhaps inevitable soubriquet of "ninja turtle" - we clamber out into the bed of the Kamo river as it hurries down a narrow valley between wooded slopes.

They find one larva, small and black - then two, then three - and finally a roseate miniature of the real thing, several years old.

Without DNA analysis it is impossible to be sure, but the professor is pretty sure this is a hybrid.

Back in his lab at Kyoto University, he demonstrates the extra aggressiveness of the Chinese species. With a fish dangled in front of its nose, it turns in a flash from dopey sloth to snapping tiger.

The aggressiveness is helping the Chinese males take over the dens of the local rivers - and with the dens, the right to breed. The Japanese giant salamander may soon be extinct as a separate species in these waters.

With the hanzaki under threat from habitat destruction, with invasive species threatening in some areas and with climate change and disease lingering as other possible threats on the horizon, a number of institutions have set up captive breeding programmes.

In a compound at Hiroshima's Asa Zoological Park, Hidekazu Ashikaga shows us how it works.

An "artificial river" flows between artificial nests just like the ones in Toyohira, filled with the back ends of dominant males.

At breeding time, the salamanders do their thing and little salamanders emerge from the fertilised egg mass, just as in the wild.

The offspring are kept in a sequence of caskets, lined up with military precision, each labelled with the year in which its occupants hatched.

Recently, the facility saw the first emergence documented anywhere in the world of third-generation captive - animals whose parents and grandparents had been bred in captivity.

At some point, the salamanders raised here might be put into the wild to replenish some depleted stock. Until then, home is a bowl of concrete, plastic and steel, and food a supply of insects and imported fish thrown in to order.

The biggest conservation question of all - how hanzaki numbers are changing across their range - remains unanswered, although Dr Kazushi Kuwabara, Asa's vice-director, backs up the Red List's conclusion that they are probably declining.

"If we take just the area I have been looking at, compared to 40 years ago when we started the research, I feel that numbers are down by around half," he says.

Clearly, Japan's amphibian scientists are rallying to the call and doing what they can to keep the species extant.

It is an effort that is likely to receive more international attention later this year, when Japan hosts the crucial meeting of the UN biodiversity convention.

What they face is a microcosm of conservation across the planet; a multiplicity of threats, led by habitat loss.

The Japanese government placed the giant salamander under protection as a "natural living monument" half a century ago, but has put little protection on its habitat.

And perhaps, with so much development and so many human mouths to feed, that is now impossible.

Making sure that new construction includes hanzaki holes along the bank, and features shallow-sloping weirs that adult salamanders can negotiate, appears to be the most that conservation scientists are hoping for.

Perhaps the children of Toyohira feel genuine affection for their hanzaki.

If so, maybe their generation will find a more natural way of looking after the "living fossil" creature and its environment than the current one is managing.
Posted by Mercury at 9:00 AM