Student loans and our friend the lobbyists 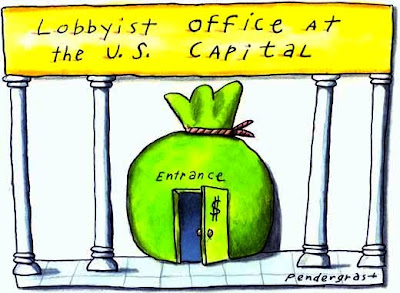 The New York Times
Four months ago, it appeared all but certain that the White House and Democrats in Congress would succeed in overhauling the student loan business and ending government subsidies to private lenders.

President Obama called the idea a “no-brainer” last fall, predicting it would take billions of dollars from the profits of private lenders and give it directly to students, and many colleges were already moving to get loans directly from the federal government in anticipation of the next move by Congress.

But an aggressive lobbying campaign by the nation’s biggest student lenders has now put one of the White House’s signature plans in peril, with lenders using sit-downs with lawmakers, town-hall-style meetings and petition drives to plead their case and stay in business.

House and Senate aides say that the administration’s plan faces a far tougher fight than it did last fall, when the House passed its version. The fierce attacks from the lending industry, the Massachusetts election that cost the Democrats their filibuster-proof majority in the Senate and the fight over a health care bill have all damaged the chances for the student loan measure, said the aides, who spoke on the condition of anonymity because they were not authorized to discuss the matter publicly.

But they said the administration had recognized the threat and was beginning to push back in an effort to get the plan approved.

Sallie Mae, a publicly traded company that is the nation’s biggest student lender with $22 billion in loans originated last year, led the field in spending $8 million on lobbying in 2009, more than double the year before, and other lenders spent millions of dollars more, according to an analysis prepared for The New York Times by the Center for Responsive Politics.

Political action committees for the lenders and company employees made $2.1 million in political contributions last year, with the money split evenly among Democrat and Republican candidates, the data showed. Sallie Mae’s PAC alone made $194,000 in donations.

Some 10 million students got loans last year to help pay for their educations, and there is disagreement about whether having the federal government take over virtually the entire lending program would help or hurt them. Private lenders warn that students may default on their loans more often because they will get less counseling; the Obama administration says students will benefit from more grants and expanded educational programs.

A defeat for the White House at the hands of the industry could become further evidence of the administration’s sagging political fortunes. The unexpected loss of the Massachusetts Senate seat has given opponents of the lending plan an opportunity that seemed unlikely last September, when the House approved legislation to move to a federally-sponsored loan program.

The student loan industry, which would be forced out of the loan origination business if the proposal became law, is seeking to cast the administration’s plan as an ill-conceived government takeover that could put thousands of people out of work at private lending centers around the country at a time when unemployment is hovering around 10 percent.

“We anticipated this,” Arne Duncan, the education secretary, said of the lending industry’s lobbying efforts. “They’ve had a sweet deal. They’ve had this phenomenal deal that taxpayers have subsidized, and that’s a hard thing to give up.”

Private lenders get a cut of the federally backed loans that they originate and service, with little risk of their own. At Sallie Mae, lobbyists for the firm are focusing on senators regarded as fiscal conservatives, as well as those in states that are home to lending centers with jobs at stake, including Florida, Illinois, Nebraska, New York and Pennsylvania, said John F. Remondi, chief financial officer for the company.

Student loan lenders employ about 35,000 people around the country, although estimates differ as to how many jobs would be eliminated if the federal government took over all direct lending on student loans.

“We haven’t left any stone unturned — we’ll meet with anyone who will meet us,” Mr. Remondi said in an interview. “We’re trying to identify at least 12 senators who would be helpful in this process.”

At the same time, Sallie Mae and other lenders have staged a series of town-hall-style meetings at their job centers around the country to help mobilize opposition to the White House plan and collect thousands of signatures for a petition drive in support of their own plan.

“I would think that the White House would prefer not to make senators vote for something that is going to be very unpopular in their states — and for good reason,” said Jamie Gorelick, a former Clinton administration official who is now lobbying for the lending industry.

Mr. Obama defended his plan last week in his State of the Union address.

“To make college more affordable, this bill will finally end the unwarranted taxpayer subsidies that go to banks for student loans” and use the savings to finance other educational programs, he said to cheers from Democrats. “In the United States of America,” Mr. Obama said, “no one should go broke because they chose to go to college.”

The money that would be saved by cutting out the private-industry middlemen — about $80 billion over the next decade, according to a Congressional Budget Office analysis — could instead go toward expanding direct Pell Grants to students, establishing $10,000 tax credits for families with loans, and forgiving debts eventually for students who go into public service, administration officials say.

The bill would also shift tens of billions of dollars in expected savings to early learning programs, community colleges and the modernization of public school facilities.

Representative George Miller, the California Democrat who has led the fight for the lending overhaul as chairman of the House Education Committee, predicted in an interview that the plan would ultimately pass.

“If people want to lose $80 billion on the taxpayer’s dime for the very narrow interests of Sallie Mae, I guess they can decide that, but it makes no economic sense to me,” he said. “They had a great ride for years.”

If Congress backs Mr. Obama’s proposal, opponents say that students will forfeit the individualized service that private lenders are better able to offer: a one-on-one meeting in a high school gym, a range of loan options to pick from, or an 11th-hour meeting to avoid a default. The lenders have offered an alternative proposal to retain a more active role in originating loans, which they say would generate significant federal savings — $67 billion in the next decade, according to the Congressional Budget Office.

Some financial-aid administrators at colleges around the country say they are worried that the political uncertainty over the loan proposal and the one-size-fits-all approach of the White House’s approach could hurt colleges and students.

“We’re caught in a political struggle,” Caesar Storlazzi, the chief financial aid officer at Yale, said in an interview. Like a wave of other colleges in recent months, Yale decided in November to switch from private-sector loans to the federal government’s direct-lending program.

But with passage of the White House plan now appearing “less inevitable,” Mr. Storlazzi wonders whether keeping the private lenders in business is better for students.

“It really felt like the administration was just shoving this down our throats,” he said. “It feels a bit like a federal takeover.” With competition among lenders, he said, “We get better prices and services.”
Posted by Mercury at 8:21 AM