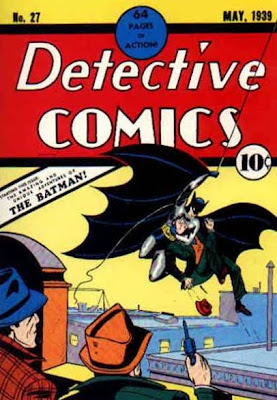 A Superman comic sold for a million bucks and now a Batman comic triumphs.

A comic showing the debut of superhero Batman has been sold for more than $1m (£655,000) at an auction in Dallas.

BBC NEWS
The rare 1939 copy of Detective Comic No 27 was bought by an anonymous bidder from a seller who also wished to keep their identity secret.

The sale comes just days after an early edition of a Superman comic sold for $1m - only to be outdone by Batman.

Barry Sandoval, of auction house Heritage, claimed it was the biggest price on record for a comic book.

"It pretty much blew away all of our expectations," he said of the $1.075m winning bid.

"We can really say that Batman has nosed out Superman, at least for now."

According to experts, the debuts of Batman and Superman were always likely to be the first to break the $1m barrier, with both examples in excellent condition.

"We're probably seeing a little bit of a feeding frenzy," he said, adding that comic books are seen as a sound investment.

guardian.co.uk
The 70-year-old comic book in which Batman made his debut has sold at auction for more than $1m (£655,000), breaking a record set earlier this week by a Superman comic.

The rare copy of Detective Comics No 27, which cost 10 cents when it was first sold in 1939, fetched $1,075,500 from an anonymous buyer on Thursday, according to Heritage Auction Galleries.

"It pretty much blew away all our expectations and now it's the highest price ever raised for a comic book," said Barry Sandoval, director of operations of Heritage's comics division.

A copy of the first comic book featuring Superman, a 1938 edition of Action Comics No 1, sold on Monday for $1m in a deal between a private seller and private buyer. The transaction was conducted by the New York City auction site ComicConnect.com.

"We can really say that Batman has nosed out Superman, at least for now," Sandoval said.

He said the seller had bought the Batman comic in the late 1960s for $100. With a bright yellow background, it features Batman swinging on a rope above city rooftops.

"That cover is one of the most famous of all comic book covers," Sandoval said.

JC Vaughn, associate publisher of The Overstreet Comic Book Price Guide, said most people had predicted it would be the comics with the first appearance of Superman and Batman that broke the $1m barrier. Both comics that sold this week were in great condition, scoring an 8.0 on a scale that goes to 10, he said.

George Pantela, owner of GP Analysis, based in Melbourne, Australia, which tracks sales of certified comics from more than 20 auction houses and dealers, said the previous record was about $317,000, paid a year ago for a lesser-grade Action Comics No 1 than the one sold this week.

Vincent Zurzolo, chief operating officer of Comicconnect.com, said: "It's an exciting week in comic books when you have two comics selling for $1 million."
Posted by Mercury at 3:00 PM

pretty amazing what a drive to have something coupled to wealth produces....and the food banks are left wanting

Did you notice the sources...all British. There was not a single mention in US press.