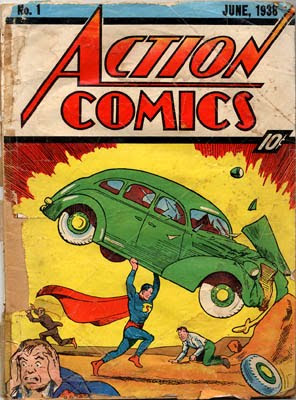 Super hero, super powers, super price--one million bucks. Why do we collect things? Is there a human gene that drives some to spend millions for fine art or one million for a comic book. Well, someone did spend $1, 000, 000 for a fine copy of Action Comics No. 1 featuring Superman [June 1938]. Did ancient man or Medieval man collect? Perhaps collecting [the better goodies] is an expression of wealth. And I would suspect that the spectrum of collecting is very broad. I knew a man who collected nothing but bottle openers. I confess...I collect discarded cat whiskers that I would gladly sell for a million. 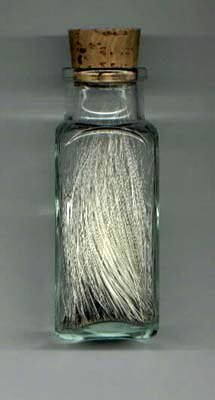 guardian.co.uk
A rare copy of the first comic book to feature Superman sold for $1m (£640,000) yesterday, smashing the previous record for a comic.

The 1938 edition of Action Comics No1 was sold by a private seller to a private buyer. Neither released their name.

The issue, which has a cover featuring Superman lifting a car, originally cost 10 cents.

The transaction was conducted through the auction site ComicConnect.com. Stephen Fishler, the co-owner of the site and its sister dealership, Metropolis Collectibles, orchestrated the sale.

Fishler said the seller was a "well-known individual" in New York with a pedigree collection and the buyer had previously bought an Action Comics No1 of lesser importance.

"It [Action Comics No1] is considered by most people as the most important book," said John Dolmayan, the comic book enthusiast and dealer best known as the drummer in the rock band System of a Down. "It kind of ushered in the age of the superheroes."

Dolmayan, who owns Torpedo Comics, paid $317,000 for an Action Comics No1 issue on behalf of a client last year.

That purchase is considered the "official public record" for a comic book sale, Mark Zaid, the marketing director for the Comic Book Collecting Association, said.

The copy sold yesterday fetched a much higher price because it was in better condition, rated as an 8.0 grade out of 10.

"The fact that this book is completely unrestored and still has an 8.0 grade, it's kind of like a diamond or a precious stone," Dolmayan said. "It's very rare."

Only around 100 copies of Action Comics No1 are believed to remain in existence, and only a handful have ever been rated so highly. It is more unusual still for such copies to be made available for sale.

"It is still a little stunning to see 'a comic book' and '$1m' in the same sentence," Fishler said. "There's only one time a collectible hits the $1m threshold."
Posted by Mercury at 5:32 AM