"Peer review"...still in the limelight of analysis 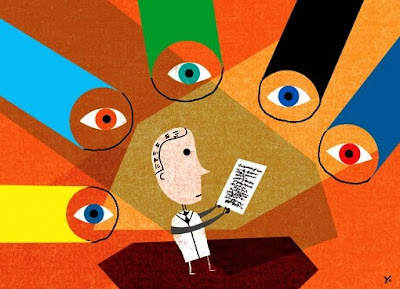 counterpunch
While the hacked emails episode several months ago revealing attempts by scientists to withhold information about global warming from publication has put the matter of peer review under scrutiny like never before, secrecy in peer review continues to be upheld by the science establishment as a good thing rather than seen for what it is – a brake on the flow of ideas, a reminder that rogue scientists face rejection by powerful forces, ostracism and other tortures.

Jerry Fodor and Massimo Piattelli-Palmarini report colleagues attempted to silence them from publishing in their new book that Darwin's claim was wrong about natural selection. Some of these dark forces afflicting Fodor were brought to light in a chapter in my own book The Altenberg 16: An Expose of the Evolution Industry.

Why not just thrash these ideas out in the open as in other professional fields and properly pay scientists to write reviews instead of sending the journal money off to Wiley? Maybe then science referees (reviewers) would take time from their academic responsibilities to actually read papers submitted – particularly those from the unaffiliated.

In my previous story on peer review, I posed the question of whether a science peer review system based on secret submission policies benefits the American public who fund science (it does not), and I included correspondence between the Proceedings of the National Academy of Sciences and the authors of several papers submitted months ago for publication by National Academy of Sciences member Lynn Margulis. One of those papers still awaits publication and Margulis, who says she "only wants to see that real science, open to those who want to participate, is well done, discussed critically without secrecy and properly communicated" is now prepared to bring the PNAS editorial board before the NAS advocacy committee over the case, if necessary.

I was curious how journal reviewers are paid and so I called PNAS managing editor Daniel Salsbury the other day to ask him. Salsbury told me that neither the editorial board nor any of the anonymous reviewers of PNAS – the most prestigious science journal in the world – is paid. It's "all voluntary", said Salsbury.

What then is the incentive? Why do these extremely busy scientists work as slaves?

Wiley Evolution and Development journal editor Rudy Raff told me scientists see it as "traditional community service." Raff says each of his editors gets an allowance for an editorial assistant but the editor does not get paid nor do the anonymous referees. And Raff thinks the anonymity does work. "It allows reviewers to speak frankly", he said, "many scientists feel if someone is paid, there may be a question of bias."

Massimo Pigliucci, an editor of the fairly new open-access journal Philosophy and Theory in Biology, "a product of the Scholarly Publishing Office of the University of Michaigan Library and DLXS," once termed the idea of a paid review "bribery". The journal's board members include half a dozen of the Altenberg 16 scientists (esteemed cell biologist Stuart Newman is not among them).

But could such journal board positions simply be fast-tracks to publication of an editor’s or an editorial board member’s own work and a tool for access to grant money?

Raff indeed told me that "marks you look for in a scientist" are whether they have served on boards. But not too many, he said. As in the corporate world, that would be a negative indicator.

James MacAllister, a 61-year old graduate student in the Margulis lab at the University of Massachusetts-Amherst, went further. MacAllister said "there's certain politics and gaming of the system that goes on at the journals".

Open-access scientific publishing, however, is proving useful to a degree in leveling the playing field so that independent scientists have a shot at being published and cited. But independent scientists still face the problem of editors not having the cross-disciplinary knowledge necessary to properly assess unique papers, i.e., the biologists may not know enough physics, for example.

Gregory O’Kelly, an independent investigator of electrochemical therapy in treating debilitation following nervous injury and reversing the degeneration of aging, submitted one of his papers titled "The terrestrial evolution of metabolism and life - by the numbers" to the open-access journal Theoretical Biology and Medical Modeling. After facing numerous journal rejections, his paper finally drew the attention of TBioMed editor Paul Agutter and the paper was published, resulting in 1,400 viewers.

But when O’Kelly attempted to publish a second paper on the subject in TBioMed that was more cross-disciplinary involving serious math, the philosophy of science and the history of electrophysiology – the journal told him it was difficult to find reviewers for the paper. So O’Kelly approached other journals.

O’Kelly wrote to me following my story about Margulis and PNAS saying:

"I have submitted the paper to a number of philosophy of science journals, none of which, yet, would accept it for review. The list includes three journals, but is not limited to that. These three are Biology and Philosophy, University of Chicago Journal of the Philosophy of Science, and Philosophy and Theory in Biology. The paper has numerous references to papers published already in the first two journals. The paper’s content reveals that the authors of the referenced papers do not understand physics, nor do they understand the details and historical background of the original work that they now celebrate as biophysics. The editorial screens for these journals took up to a week to send me a rejection notice, on rather flimsy grounds. They are dedicated, it seems, to the perpetuation of the stasis of careerism that lies like a shroud on the field of academic publishing.

But the most insulting rejection came from Philosophy and Theory in Biology, a relatively new publication (started in August) whose senior editor is none other than Massimo Pigliucci. It took his team of editors only 36 hours to reject the paper on the grounds that it was not appropriate. The science and math in the paper, unless examined by specialists in the field, could not possibly have been understood by the editors in that amount of time. . . . I don’t think Massimo ever saw the paper, trusting instead to his editorial scriveners to do their duty. In an embarrassing rant, presented in two emails, I raged that not only was his journal the most appropriate one, given its stated objectives, but also his editorial linemen were stultifying in their ignorance not just of current trends in the biosciences, but of the philosophy of science and the physical sciences. . . . [D]espite his posturing as a man of science and a skeptic, [he] is an obstacle to scientific progress although chief editor of a journal alleged to advance that very thing."
Floyd Rudmin, a psychology professor at the University of Tromso in Arctic Norway and member of the US organization, Psychologists for Social Responsibility also emailed following the Margulis - PNAS story telling me about the obstacles to publishing his paper on how minorities adjust to a new culture – "acculturation". Rudmin said there’s been a paradigm running since the 1960s on this that "violates all of the standards of psychological research".

He said his paper addressing acculturation eventually won an American Psychological Association research prize and his department’s annual reseach prize, but that the paper could not pass peer review. He published it in an anthropology journal.

The paper is linked near the top on Google, he noted, which pleases him (although many take issue with the fairness of the search engines, including this journalist. Also see John Landon’s book: World History and the Eonic Effect regarding search engine interference.).

"One journal, Applied Psychology: An International Review, took one year to get 2 reviews (not the stipulated 3 reviews in 3 months), done by the very scholars [who] I told the editor in advance will oppose because I am exposing their own errors. My complaints to Blackwell’s CEO about this instigated Blackwell to create some editorial guidelines. But Blackwell said that they cannot intervene in any way in editorial decisions about content.

The problem is ubiquitous, and there is no avenue of appeal. Norway made a science ethics board, but they refuse to consider matters of unethical publication practices. Blackwell’s CEO told me that my only avenue of appeal is to the officers of the science associations who chose the journal editor. Scan. J. Psychol. is jointly run by the national psychology association of the 5 Nordic nations. I wrote to the officers of all 5 of them concerning this, and not one person replied."
Also emailing in response to the Margulis piece was Morad Abou-Sabe, former President & Assistant Chancellor, Misr University for Science & Technology, Cairo, Egypt and Emeritus Professor, Department of Cell Biology & Neuroscience, Rutgers:

"I guess I am not surprised about the review process, it has always been a privileged club that controlled both ends of the research process, grant funding and publications. I remember that at times I had to go to my congressman for help, but it did not matter. It is the "Old Boys Network", as it is called."
Constructal Theorist Adrian Bejan of Duke University says essentially what the individual investigator is up against is the "academic mafia" and notes the following in International Journal of Design & Nature and Ecodynamics: "Loaded with bias is the review process reserved for the big projects. The review is run by the "leaders," the persons who head (or have headed) the big projects. They are the influential, the ones who are consulted during the review process and even before a new research initiative is selected for funding by the government. They are many, not one. They constitute a social stratum known colloquially as academic mafias and dark networks (in social dynamics, these terms mean "networks of persons exerting hidden influence"). Favored are the applicants who work for the mafia."
Isn’t it time to stop kissing the ring?

[Suzan Mazur's reports have appeared in the Financial Times, The Economist, Forbes, Newsday, Philadelphia Inquirer, Archaeology, Connoisseur, Omni and others, as well as on PBS, CBC and MBC. She has been a guest on McLaughlin, Charlie Rose and various Fox Television News programs. Her new book, The Altenberg 16: An Expose of the Evolution Industry, is published by North Atlantic Books.]
Posted by Mercury at 8:44 AM