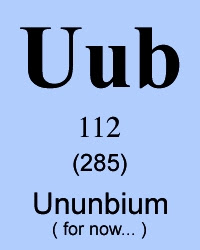 A few months to wait for a definitive name and the debate continues.

That all depends on who's doing the naming. In the world of heavy-element synthesis, the folks at GSI, the Center for Heavy-Ion Research in Darmstadt, Germany, have done a heck of a lot of element naming. To date, they’ve come up with five monikers. Now they’re working on number six. The GSI team headed by Sigurd Hofmann just proposed to the International Union of Pure and Applied Chemistry (IUPAC, the official keeper of chemistry names) that element 112 should be called copernicium and abbreviated Cp. The team decided to name the element in honor of Nicolaus Copernicus, the radically forward-thinking 16th century astronomer who, in GSI’s words, "paved the way for our modern view of the world," by figuring out that earth orbits the sun, not the other way around. IUPAC has to give its stamp of approval for the name to become official. That process might take about 6 months.

The Darmstadt group has already had the pleasure of dreaming up names for elements 107 (bohrium); 108 (hassium); 109 (meitnerium); 110 (darmstadtium); and 111 (roentgenium). The group actually discovered element 112 some thirteen years ago. But IUPAC officially confirmed their discovery just a few months ago.

For fun, after learning that IUPAC gave the nod to GSI for discovering element 112—and the privilege of naming that superheavy element, the Royal Society of Chemistry’s Chemistry World blog invited readers to propose names of their own for the short-lived bugger.

Readers had a field day. They came up with helvetium, emergencium, darwinium, zlatan, terrorismus, fibonaccium, and bloodymindium. One reader suggested ledzeppelinium, "because it's a heavy metal" the entry said. Which reminds me… Almost 25 years ago when I worked for the chemistry department at Cleveland State prepping the undergrad analytical lab, I set out a waste-collection bottle labeled "for heavy-metal types like Zeppelin, Sabbath, and AC/DC." Besides the T.A., maybe two kids found it funny.

I kind of like the ledzeppelinium idea. But copernicium certainly has a nice ring to it. Anyhow, as one of the other Chemistry World bloggers noted, "Anything's better than ununbium."

A discussion among chemists...
Copernicium?