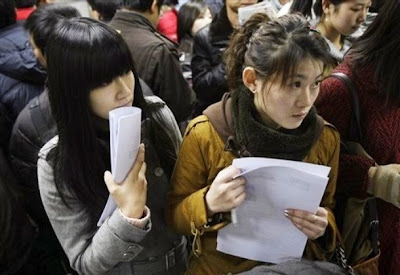 Investor's Business Daily
The first seven weeks of Barack Obama's presidency have been notable for the use of our economic turmoil as an excuse for showering money and favors on the interest groups that worked to put him in office.

The education establishment was one of those groups. If there had ever been the slightest doubt that Obama would see to its care and feeding, it was erased by his Feb. 24 speech.

Operating in his usual central planning mode, Obama stated that the country is underperforming on education and will face trouble unless we put more people through college. "Right now," he said, "three-quarters of the fastest-growing occupations require more than a high school diploma. And yet, just over half our citizens have that level of education."

Sounds ominous, but where does that "three-quarters of the fastest-growing occupations" number come from and what does it mean?

The number comes from the Bureau of Labor Statistics, which publishes a document on the 30 fastest-growing occupations. If you look at what it actually says, you find that the president fudged the numbers.

We have never had difficulty filling any of those occupations, but the real problem with Obama's use of the BLS data is that he doesn't look at the projected numbers of workers in the various occupations.

The three occupations expected to have the largest increases in the number of workers employed are personal and home care aides, home health aides and medical assistants — all jobs that can be done by people with only on-the-job training.

If you add up all the occupations where on-the-job training is sufficient, it's nearly 52% of the expected job growth. Add in the others that only call for vocational training and it's over 58%.

So instead of proving that the country needs more "investment" in higher education, the data on these fastest-growing jobs show nothing of the sort.

And if you look at BLS projections for the entire labor force, you see the same thing — the demand for workers who don't have bachelor's degrees remains strong.

The supposed educational shortfall is a myth.

What about the fact that college-educated workers earn more than noncollege workers? Doesn't that show how beneficial it is to earn a degree, and why the country would gain from having more people graduate from college?

It's true on average that college grads earn more, but it's not true that having obtained a degree automatically causes an individual to become more productive.

We have so over-expanded higher education that academic standards have plunged to keep weak, disengaged students content — that is, to keep their money flowing in. Consequently, America now has a glut of college graduates, many with basic skills that would have been thought poor for middle-school kids 50 years ago.

Lots of those people end up in jobs that require no academic training and don't pay well. The BLS also keeps statistics on that, if the president is interested.

Therefore, the country won't get an economic boost from shepherding still more young people through college. Keeping students in school longer and longer benefits the education establishment, but it doesn't give us a more productive work force.

Finally, Obama said the U.S. should strive for "the highest proportion of college graduates in the world" by 2020. He seems to think that there's some necessary connection between the average level of formal education in a country's work force and its prosperity. If we want the fastest-growing economy, we just need to put more people through college.

The trouble with that notion is obvious. There's no more an automatic connection between a nation's educational level and prosperity than there is for an individual. We already have a surfeit of people who have been through college, and adding to it won't pull the economy up by its bootstraps.

Prosperity depends on capital investment, entrepreneurship and freedom, all of which are under siege in the Obama agenda. Expanding college attendance may be good politics, but it's folly to believe that it will cause economic growth.

[Leef is director of research at the Pope Center for Higher Education Policy in Raleigh, N.C.]


"Academics for all" poll

College beyond the reach of some?

Liberal education may be dying

"YouTube"...venue for instruction and knowledge?


Thanks to stringer Tim.
Posted by Mercury at 11:03 AM