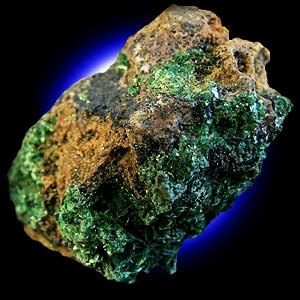 From atomic bombs to cellphones, a history of uranium’s rise

Tom Zoellner figured out that gap in the nonfiction literature, and so decided to fill it with his new book Uranium: War, Energy and the Rock That Shaped the World.

He does so skillfully. Zoellner possesses the gift of making complex science clear, while weaving the saga of the historically unwanted rock into a compelling narrative.

What could be more compelling, ultimately, than the destruction or survival of the human race? Uranium dust scattered on the earth provides a paradoxical twist to the saying "from dust to dust." As Zoellner comments, "The earth came seeded with the means of its own destruction, a geologic original sin."

Uranium that can be processed for use in weapons manufacturing and the more benign nuclear power plants that heat and light cities cannot be found just anywhere. The deposits which allowed the United States government to construct the bombs that ended World War II came mostly from what used to be known as the Belgian Congo, more specifically in an area called Shinkolobwe.

Zoellner calls the remote African mining site "a perverse miracle, a globule of radioactivity that had burbled up from deep in the earth's crust five million years ago. Like most uranium deposits, it had seeped upward in carbonate solution and become trapped in the sinews of clays and granites. But its purity was more than 200 times that of most uranium deposits. This would turn out to be a unique occurrence in the history of the planet, and now it stood as the best chance for the United States to gain a chokehold on world supply."

An explorer for a Belgian mining company had discovered the deposit in 1915, before nuclear energy used for evil and good became a reality.

At first, the Belgian conglomerate found uranium mining through slave labor profitable because of the medical market. Radium, derived from uranium, had gained a reputation for curing cancer miraculously. A gram of radium could bring $175,000 (in 1915 dollars), about 30,000 times the price of gold.

Fast forward to the 1930s, as physicists motivated by wartime imperatives figured out how to attack the volatile atoms within processed uranium to unleash destructive energy that could destroy entire cities, with additional deaths tallied as survivors of the original blast contracted radiation poisoning.

The US government made a deal with the Belgian mining bosses to quietly ship the substance to the North American continent. At top-secret sites in Washington State, Tennessee, and New Mexico, the relatively straightforward but expensive process to extract bomb-grade material from what had been considered a trash rock geared up.

After Zoellner dispenses with World War II-related uranium lore, he covers the uranium saga from multiple angles. Some of the book’s latter half is organized geographically, as Zoellner demonstrates the moral and financial impacts of uranium fever in locales as diverse as Niger, Australia, and the state of Utah. Other portions of the book are organized by the product-yields of uranium – medical treatments, energy to power homes and businesses, and decorative uses (despite the danger.)

The perils are rarely far from the center of the discussion, even when everybody involved in a uranium enterprise is well intentioned.

After all, Zoellner explains, uranium "cannot undergo fission in a reactor without producing a tiny residue of plutonium," the form used in bombmaking. "A 'peaceful' nuclear reactor is no different in basic design from the complex at Hanford [Washington State] that manufactured the plutonium for the Nagasaki bomb."

Then, Zoellner comments sagely, "herein lies one of the damnable paradoxes of uranium: The apparatus that spins a turbine also happens to be a munitions plant. One is a coefficient of the other; the mineral cannot escape its own unstable essence."

It is remarkable how the fate of the human race can reasonably be predicted through the exploitation of a rock rarely encountered by most women and men.

"In this rock we can see the best and worst of mankind," Zoellner comments. "The capacity for scientific progress and political genius, the capacity for nihilism, exploitation and terror."

"We must find a way to make peace with it. Our continuing relationship with uranium, as well as our future as a civilization, will depend on our capacity to resist monitoring that grim and never-ceasing instability that lies within the most powerful tool the earth has to give."

The New York Times
When it comes to press coverage, uranium does pretty well among its peers on the periodic table. Surely strontium or seaborgium or even manganese would kill for its name recognition. But how well do we really know the element in whose long, mushroom-shaped shadow we all live? If someone handed you two rocks and asked which was uranium, would you have any idea how to tell?

Probably not. For most of us, uranium is an abstraction, more like a vitamin or a gigabyte than like, say, copper. We know it is important, and we know more or less what it's for, but it's not something we'd recognize by sight.

With "Uranium: War, Energy, and the Rock That Shaped the World," the journalist Tom Zoellner sets out to rectify that lack of familiarity. Part history and part travel narrative, the book presents the atomic age not through its scientists or grand strategists, but through its raw material: an undistinguished-looking ore, more common than tin, whose destructive power when refined is hard, even today, to imagine. As Zoellner writes, "A single atom of uranium is strong enough to twitch a grain of sand. A sphere of it the size of a grapefruit can eliminate a city."

Uranium's history is a geological ugly duckling tale. Aside from occasional use as a dye, the ore was most often seen as trash — its German name, Pechblende, meant "bad-luck rock," Zoellner says — and silver miners who found the greasy gray uranium dirt just left it in piles nearby. It was only with Marie and Pierre Curie's discovery of radium in uranium ore that people started to take notice — the Curies, after all, touted their find as a cure for cancer. Experiments on radium led in 1932 to the discovery of the neutron, which the Hungarian physicist Leo Szilard grasped might be able to set off catastrophically powerful chain reactions. The rest, more or less, is history.

Which is a bit of a problem for Zoellner. The genre of pop microhistory into which his book fits — "Cod: A Biography of the Fish That Changed the World," "Banana: The Fate of the Fruit that Changed the World," and "Mauve: How One Man Invented a Color That Changed the World" — is predicated on the idea that these are not things people normally understand to be world-changing. Nuclear weapons, however, are not in this category. As a result, large portions of the story Zoellner tells have been explored in more depth in other popular accounts.

Perhaps to address this, Zoellner intersperses the history with descriptions of his own globe-trotting, from the Congo to Mongolia, from the American West to Eastern Europe to Australia. He pokes around in old mines and tours a uranium refining plant. He calls at the offices of the International Atomic Energy Agency, in Vienna, and the World Nuclear Association, in London. He interviews the Yemeni minister of electricity, is almost kidnapped on the way to a mine in Niger and knocks back Chechen grappa with border guards responsible for keeping black-market uranium from being smuggled from Russia into Georgia.

In general, Zoellner is a better describer than explainer. His writing on science or politics can feel perfunctory, but his prose grows richer when describing what he sees and hears in his travels: the "ragged and hard-used look" of the earth near one abandoned mine, the "monotone fugue" of the pumps that keep another from flooding.

The best sections of the book are those that narrate the stories of the competing uranium races kicked off by the start of the cold war. The Soviet nuclear arsenal was fed by prison labor, and the authorities simply convicted more people of crimes when they needed more workers. The convicts lived in gulag conditions, and worked without even the most basic safety precautions. At the St. Joachimstahl mine in Czechoslovakia, Zoellner writes, guards were so leery of escape attempts that bedsheets were issued only during the summer, "to prevent the inmates from using them as cloaks to blend in with the snow."

In the United States, on the other hand, the uranium hunt was the "last true mineral rush in the American West." Lured by the grossly inflated prices the federal government offered, fortune hunters flooded into the Rockies. A huckster-plagued penny stock market for investors eager to put their money into uranium claims arose in Salt Lake City, fueled by a potent mixture of avarice and patriotism — a uranium strike, after all, was not only the route to riches, but also a blow against the nuclear-armed Communist menace.

Today, concern about climate change and desire for "energy independence" have driven former skeptics to take another look at nuclear power. Some even talk of a "nuclear renaissance." At the same time, experts in and out of government worry that the small club of nuclear weapons states is soon likely to grow, as North Korea’s nuclear arsenal or Iran's potential arsenal incites a regional arms race. In preparation, it probably wouldn't hurt to get to know the rock at the root of it. 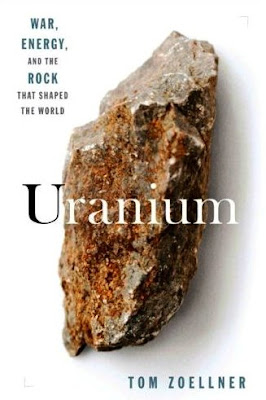 Uranium: War, Energy and the Rock That Shaped the World

Email ThisBlogThis!Share to TwitterShare to FacebookShare to Pinterest
Labels: "Uranium: War, Energy and the Rock That Shaped the World", Tom Zoellner, uranium