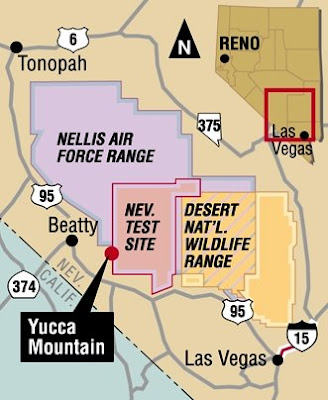 Slate
We've seen a lot of hyperbole lately about the significance of a presidency that's all of six weeks old. I hesitate to add to it. But the following statement happens to be the literal truth.

The ramifications of the 2008 presidential election will be felt for 1 million years.

One million years is a long time. A million years ago, Homo erectus...was getting ready to invent the hand axe and discover fire. Yet 1 million years is the length of time that the Bush administration was preparing to guarantee (apparently to our successor hominid species) the safe storage of spent nuclear fuel rods inside Nevada's Yucca Mountain, in a waste facility whose approval had been making its way through three branches of government for a comparatively brief 32 years. The goal was to start dumping this high-level nuclear waste inside Yucca Mountain in 2020. Here is how the Bush Department of Energy forecast the year 1,002,020 A.D. in a safety report issued this past June when it submitted an application for Yucca Mountain's approval to the Nuclear Regulatory Commission:

Imagining the initial quantity of radioactivity emplaced in the repository as 1,500 marbles, natural radioactive decay would leave 270 marbles after 1,000 years and only 90 marbles after 10,000 years. By 100,000 years, there would be only eight marbles left. Finally, after 1 million years, just one marble out of the original 1,500 would remain … about 99.93 percent of the radioactivity originally placed in the repository would have decayed.

This constituted remarkable long-term planning for an administration that refused to provide 10-year budget projections. It was imposed from without. Originally, Yucca Mountain required "only" a 10,000-year safety guarantee, but in 2004 a federal court insisted on a million-year standard, citing concerns in a 1995 study by the National Academy of Sciences that the nuclear waste would take much longer than 10,000 years to reach maximum radiation levels. The NAS had said a reasonably accurate assessment could be made of the site's geology over the next million years. (After that, not so much!) The Environmental Protection Agency duly issued its first-ever million-year regulation, setting a maximum legal limit for release of radioactive materials at 15 millirem per year for the first 10,000 years and 100 millirem for the next 990,000. Nevadans of the 10,021st century would have to figure out themselves what to do about the 0.07 percent remnant left in that last marble.

The entire discussion was, of course, outlandishly hubristic. It was made necessary by the outlandishly severe and long-lasting environmental dangers posed by nuclear waste. Six decades after the dawn of the nuclear era, the only plausible answer to the question "What do we do with this stuff?" is "Don't create any more of it." That, in effect, is what President Obama is saying in fulfilling his campaign promise to shut down Yucca Mountain. The program, Obama's new budget states, "will be scaled back to those costs necessary to answer inquiries from the Nuclear Regulatory Commission while the administration devises a new strategy toward nuclear waste disposal." That's bureaucratese for "Yucca Mountain is dead."

Had John McCain been elected, Yucca Mountain would be headed toward final NRC approval, possibly before the next presidential election (though Senate Majority Leader Harry Reid of Nevada, a longtime opponent, would be trying very hard to prevent that). During the campaign, McCain favored opening Yucca Mountain for business even while telling an interviewer that he would never permit transport of nuclear waste through his home state of Arizona en route to Nevada (with which Arizona shares a border). The Obama campaign made gleeful use of the clip. McCain's worry about the transport of high-level nuclear waste is well-founded; routinely hauling this stuff by truck or rail poses serious risk of a catastrophic accident.

The nuclear industry has long argued, correctly, that the current practice of storing spent fuel rods on-site in water-filled vaults and, after those fill up, transferring them to steel-reinforced dry concrete casks is impractical. Though the industry is loath to point out safety concerns, it has repeatedly noted that storage space is running out. In 1977, President Jimmy Carter effectively ended the reprocessing of spent nuclear fuel in civilian plants, and it's doubtful that will be reversed during an era of homeland security. (In truth, the end product of reprocessing, plutonium, would be fantastically difficult for terrorists to steal safely, but reprocessing creates environmental headaches of its own.) What should nuclear power plants do? "Our position," says Kevin Kamps, a radioactive-waste expert at the environmental group Beyond Nuclear, "is that we should not be creating this material to begin with." Since 2006, environmental groups have recommended limiting the density of existing water-filled vaults and hardening the dry casks. The Obama administration will likely end up doing something along these lines.

Global warming has caused some policy experts to call for a revival of nuclear power, whose expansion halted after the Three Mile Island accident in 1979. Currently there are 20 applications for new reactors under active consideration at the NRC. As recently as 2007, there were none. Nuclear plants are indeed vastly preferable to coal-fired plants from the standpoint of carbon dioxide emissions. But you can't just take into account the waste that power plants don't create. In shuttering Yucca Mountain, Obama makes it extremely likely that nuclear power in the United States will continue its long, slow, and extremely welcome death. For the next couple of decades, anyway. That's as far out as I'm willing to predict anything.

No to Yucca Mountain repository

Toxic waste
Posted by Mercury at 5:48 AM