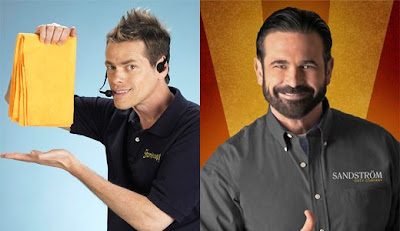 Vince Offer and Billy Mays
We have all seen them from 60 second commercials to infomercials--the carny barkers, charlatans, hucksters, snake oil merchants. They always have some revolutionary product that we must have. Two of the biggies are Billy Mays and Vince Offer. They are selling miracle goods that will change our lives all for $19.95 plus shipping and handling and, if you call within the next ten minutes we will double the offer. These guys are masters of the conartist's game. Talk fast, make the goods look great, grab the money, and run. Usually, it is junk. Yesterday, I saw Billy Mays, in his obnoxious loud voice, selling a scratch remover which reminded me of a genuine science involving polymer chemistry--that polyurethane can be "repaired". [See article below]. Billy claims that furniture and automobile scratches can be easily removed. So, I checked the Internet to see what people were saying about this great product. Nearly every one commenting had nothing good to say: The product never did what it promised to do, it left undesirable results, and customer service was terrible. The lesson to be learned is that most of these products are worthless and that the consumer should be more savvy.

"Coating Fixes Its Own Scratches"

Chemical & Engineering News
IMAGINE YOU ACCIDENTALLY scratch your car's paint when you leave your garage in the morning. Now picture that paint repairing itself with the help of sunshine during your commute to work. That sort of application is the long-term goal of research that's just been reported by polymer scientists Marek W. Urban and Biswajit Ghosh of the University of Southern Mississippi (Science 2009, 323, 1458).

The paper describes a new self-repair approach for a polyurethane coating, says Nancy R. Sottos, a materials scientist at the University of Illinois, Urbana-Champaign.

Several self-healing compounds already exist. For example, Sottos and others have designed materials that release embedded healing reactants when cracked. Other researchers have produced materials in which "the crack-mending process is initiated by an external thermal-, mechanical-, chemical-, or photo-induced stimulus," she says.

The first photochemical repair of a polymeric material was reported by a Korean team (Chem. Mater. 2004, 16, 3982). The researchers produced their polymeric film by irradiating cinnamate monomers with UV light to form cyclobutane cross-links. Any cross-links subsequently broken by cracking could be fixed with another dose of UV light.

Urban says his own work differs by incorporating a minimal amount of a self-healing additive into polyurethane. He believes his technique could be broadly applicable because the additive could be incorporated into many other types of coating materials.

The researchers synthesized the additive by linking chitosan, a polysaccharide derived from crab and shrimp shells, to oxetanes, which are four-membered rings containing three carbon atoms and an oxygen. The additive also covalently bonds to the urethane polymers. When a scratch damages the material, exposure to UV light initiates a free-radical process that cross-links broken chitosan and oxetane fragments, repairing the damage in less than an hour.

Vince Offer
Posted by Mercury at 7:56 AM