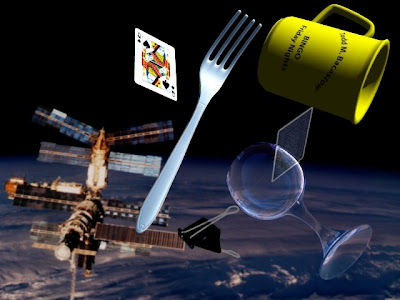 space.com
The recent surge in space junk created by an accidental satellite collision last month has bumped up the upcoming space shuttle mission's chances of taking a catastrophic hit, NASA officials said. However, the likelihood of the shuttle intercepting debris is still so low that mission managers don't foresee any problems.

Engineers analyzed how much danger would be posed to the shuttle Discovery's upcoming STS-119 flight, scheduled to launch March 11, by the new debris, which was created when a U.S. and a Russian communication satellite unexpectedly rammed into each other in orbit. The Feb. 10 smash-up produced two large clouds of shrapnel that are now circling the Earth, NASA said.

The investigation found that the new space junk raises Discovery's risk factor by 6 percent, giving it a chance of about 1 in 318 of being fatally hit by debris. Mission managers had estimated a similar figure shortly after the satellite collision, but said they had reviewed the risk in detail today.

"That is very comparable to almost all of the 14-day missions we fly," said John Shannon, NASA space shuttle program manager, at a briefing today.

The collision occurred about 490 miles (790 km) over Siberia. Discovery is due to fly up to 220 miles (354 km) above Earth, where it will dock with the International Space Station to deliver new solar array wings.

NASA is still assessing the risk to the upcoming Hubble repair space shuttle mission, targeted to fly in late May. The danger to this trip could be greater, managers said, because that shuttle is set to take its crew to an altitude of about 372 miles (600 km), putting it much closer to the range of the collision than the space station is.

"That didn't look so good, when they looked at that," Bill Gerstenmaier, NASA's space operations chief, has said.

Shot ourselves in the foot?--space debris