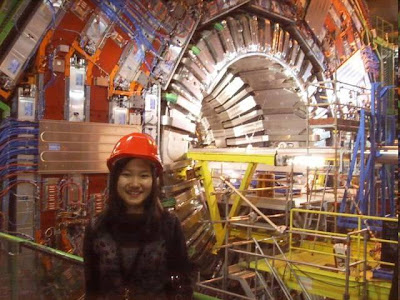 Xiaohang Quan '09, a physics concentrator, poses in front of a detector in the Large Hadron Collider (LHC) in Geneva, Switzerland, over spring break. Quan discovered a miscalculation in the hardware of the LHC, which is the world’s largest particle accelerator.
There is a lesson to be learned here...valuable insight can come from youth. The LHC people had overlooked something at the LHC and Xiaohang Quan, an undergraduate senior in physics at Princeton discovered the anomaly.

The Daily Princetonian
Xiaohang Quan '09 was working on her senior thesis when she found a miscalculation in the hardware of the world's largest particle accelerator.

Quan, a physics concentrator, traveled to Geneva, Switzerland, last week with physics professors Christopher Tully GS '98, Jim Olsen and Daniel Marlow for the annual meeting of the European Organization for Nuclear Research (CERN). This year, however, they also came to discuss Quan's discovery with the designers of the hardware for the Compact Muon Solenoid (CMS) experiment, which, as part of the Large Hadron Collider (LHC), has the potential to revolutionize particle physics.

In the hardware used to record and capture events in the LHC, she discovered errors that were leading to the appearances of double images because of particle streams known as jets.

Quan's thesis focuses on the various jet selection criteria for the LHC and finding which algorithms will be most efficient for analysis of the physics. She has worked with Tully over the past few years and said she was surprised when she discovered a discrepancy between her predictions and results when drawing her initial plots.

"If further analysis related to this discovery goes well, I think it will show physicists the right jet selection criteria to use," Quan said. "It will save much time and trouble for people, I hope."

Tully, Quan's thesis adviser, presented the errors they found in the calculations during a video conference with scientists from CERN two weeks ago.

"We came to CERN [last week] to discuss with the designers of the hardware how to put glasses on our algorithms so as to remove these double images," Tully explained.

Quan added that many physicists at the conference said they were surprised to learn she is only a college senior.

"I think people would normally assume that I am a physics graduate student, so they were kind of surprised to learn that I am in fact an undergraduate," she said.

The LHC is an accelerator located in a circular 17-mile tunnel more than 100 meters below the border of France and Switzerland. There are four main particle detectors located around the ring, in which beams of protons or heavy ions intersect and in which protons are smashed against one another at almost the speed of light. The experiments are meant to recreate conditions that existed a fraction of a second after the Big Bang.

The LHC, which cost more than $4 billion to build, was functional for a total of 10 days last September before damage to several superconducting magnets led to its temporary shutdown. It is expected to be operational again this September.

"Once it begins operating [again], the energy frontier will be an order of magnitude beyond what any accelerator has been able to achieve so far, and it will be able to collide beams at an unprecedented intensity," Tully said.

He added that Quan's contribution was "not atypical."

"Improvements to the algorithms are part of a normal process of scientific investigation that serve to improve the performance of the detectors," Tully explained. "It is this kind of work that constantly perfects the capabilities of the LHC experiments to do the best physics they can, and is business as usual for the physicists."

The search for the origin of mass in the Universe

The CMS experiment, the project the University high-energy physics group is most involved with, is an experiment within the LHC that may detect dark-matter particles. It is also expected to aid in verifying the existence of the Higgs boson.

The Higgs boson is the only unobserved particle in the standard model of particle physics. This particle has often been labeled the "God particle" in popular culture for the expectation that its discovery will yield many of the answers to the origin of the universe.

Tully has worked since 1989 on the Large Electron-Positron Collider (LEP), the forerunner of the LHC which was optimal for studying the importance of the electromagnetic and weak forces. These forces, he said, are "intimately related" to the origin of mass. He said he realized that understanding the origin of mass involved the search for the Higgs boson, the discovery of which could shed further light on the composition of all of the matter in the universe.

"We don't know what 70 percent of the universe is made of, and that's not 70 percent somewhere else," Tully said. "We are living in what we don't understand."

Tully was named head of the Higgs boson search team at LEP in 2000.

Under his direction, the group began focusing in on masses around 114 times that of the proton for the mass of the Higgs boson, allowing the group to focus its experiments and narrow the mass range at which the Higgs could be located.

Because of the LEP shutdown in November 2000 to make way for the installation of the LHC in the same tunnel, Tully said that the Tevatron collider in Illinois is "next up at bat" to discover the Higgs boson.

He joined the Tevatron collider team studying the sensitivity of the Higgs boson in 2002, and several of his Ph.D. students from the University are currently leading the team. If the Tevatron experiments are successful, though, they will not be on the same scale as what the LHC may discover, since those experiments are conducted at significantly lower energies.

Tully added that he expected to travel to CERN, which he described as the "world cafe of particle physics," at least once per month and would be spending a large part of this summer there to prepare the CMS experiment.

"All eyes are on the LHC right now, so I am looking forward to working in an environment where the level of excitement around the research will be high," Toshev, who will be the only Princeton undergraduate at CERN this summer, said in an e-mail. "This highlights a great part of Princeton — the high level of interaction of undergraduates with people at the top of their field."
Posted by Mercury at 3:33 PM

I'm not a scientist, nor a major college student, but I am doing a project on Scientific Errors, and this will be very wonderful to share. What to go Ms. Quan!! VERY Impressive!! :)