"Monsters From The Id"--reinvigorate interest in science

An event coming mid March at South By Southwest (SXSW) Film Festival in Austin, Texas...David Gargani's Monsters From The Id...and attempt to visually recall the 1950's and 1960's push to get the youth of America interested in science and technology.

David Gargani studied film at Ithaca College and has since spent the last 10 years as a commercial and feature editor. His editing credits include work on the acclaimed Metallica documentary "Some Kind of Monster" and the "Animated Alias" TV series. He is a co-owner of Blue Room, a NYC design and editorial firm and has been the recipient of numerous BDA and Promax awards for excellence in cable advertising. After directing a handful of music videos, David made his feature directorial debut with "Monsters From The Id," and is continuing to develop science driven TV and film content through his production company Sling & Arrows Films.

digitalcontentproducer.com
Monsters From The Id, an independent feature documentary, directed and edited by Blue Room co-owner David Gargani, has been accepted at the 2009 South By Southwest (SXSW) Film Festival in Austin, TX. With a running time of 71 minutes, the film will be screened in Mid-March.

A Blue Room production, Monsters From The Id, weaves together the intersecting themes of over thirty classic Sci-Fi films to tell the story of the rise of the modern scientist and his role in inspiring a nation. The film explores the psychological and cultural impact of 1950s Sci-Fi Cinema on America and asks, "Where is scientific inspiration found today?"

The 50s were an idealistic time in American history, filled with hope, opportunity, and wonder. It was also "The Atomic Age" where new technology promised to save humanity, but also put it in jeopardy. All of these factors gave birth to one of the most prolific genres in film history, 1950s Science Fiction Cinema. More then just bug eyed monsters and little green men, 1950's Sci-Fi scientist became Hollywood’s new leading man and a role model for millions of eager young boys and girls across the country. Then, after 1957, and the launch of Sputnik, science fiction became science fact as an inspired population worked toward one of the greatest achievements of mankind, space flight.

Inspiration for Monsters From The Id came from Smokin' Rockets: The Romance of Technology in Film, Radio and Television in the 1950s, co-authored by Dr. Patrick Lucanio, Professor of Film Studies, University of Oregon and historian Gary Coville. Lucanio and Coville were interviewed for this film as was Homer Hickam, Retired NASA Engineer/Retired Navy Engineer and author of the autobiographical novel Rocket Boys, the basis for the popular film October Sky; Dr. Leroy Dubeck, Professor of Physics at Temple University and author of Fantastic Voyages; and Richard Scheib, film critic from Christchurch New Zealand who authors and maintains a website called The Science Fiction, Horror and Fantasy Film Review.

"This film began as a love affair with 1950s Sci-Fi cinema, in which monsters were defeated through science and American Ingenuity. Initially, the documentary was conceived as a montage style genre study. I watched more than 30 films, read everything I could get my hands on and everything seemed to hark back to the rise of Communism and our fear of atomic power. But I felt hopeful and excited about our future. And then I read Smokin' Rockets, and other volumes by Lucanio and Coville. Their works validated what I was feeling. Next, I discovered Dubeck who uses sci-fi as a teaching tool and realized that academia was acknowledging the power of the cinema. And, of course, Hickam’s background blew me away," explained Director/Editor David Gargani. "Finally it clicked and a hypothesis was formed: 1950s Sci-Fi cinema and the role of the 'Modern Scientist,' created to calm the fears associated with the Atomic Age, influenced America and propelled us into the future. The film was transformed from a visual meditation into a call to action … but, 'now what?'… That's what this film seeks to answer."

The SXSW Film Conference and Festival, March 13-21, 2009, explores all aspects of the art and business of independent filmmaking. The Conference hosts a five-day adventure in the latest filmmaking trends and new technology, featuring distinguished speakers and mentors. The internationally-acclaimed, nine-day Festival boasts some of the most wide-ranging programming of any US event of its kind, from provocative documentaries to subversive Hollywood comedies, with a special focus on emerging talents. 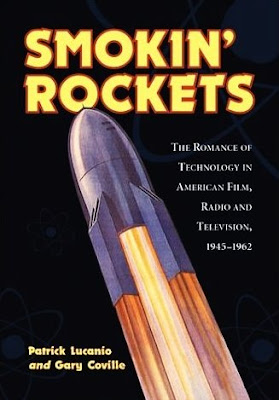 Smokin' Rockets: The Romance of Technology in American Film, Radio and Television, 1945-1962
by