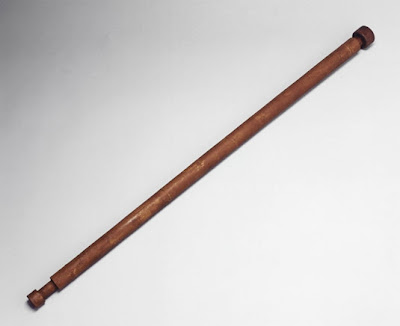 Not much to see but it is Galileo's telescope.
What a fantastic opportunity to see Galileo's actual telescope.

"A Telescope to the Past as Galileo Visits U.S."

The New York Times
PHILADELPHIA — It looked like the kind of toy telescope a child might have made with scissors and tape — a lumpy, mottled tube about as long as a golf club and barely wider in girth, the color of 400-year-old cardboard, burning with age.

But near one knobby end was a bit of writing that sent Derrick Pitts, chief astronomer of the Franklin Institute here, into rapture. The tube's focal length is "piedi 3," the inscription said, three feet. It was in the hand of Galileo Galilei. "Absolutely amazing," Dr. Pitts said.

Thus did Galileo, one of history's great troublemakers, come to America.

By turning spyglasses like this to the sky 400 years ago and seeing mountains on the Moon and satellites whirling around Jupiter in contravention of the Earth-centered cosmology of Aristotle, Ptolemy and the Bible that had reigned for a thousand years, Galileo changed the world.

His discoveries propelled astronomers on a course toward discovering signs of the Big Bang and a shadowy modern cosmos suffused with dark energy and dark matter. And his tangle with the church became the template for the war between science and religion that persists to this day.

Only two of the dozens of telescopes Galileo built survive. Neither have ever been out of Florence since Galileo's time. That is, until this week, when Giorgio Strano, curator at the Institute and Museum of the History of Science there, escorted this humble tube to the Franklin Institute.

Scholars do not know when Galileo built this particular telescope, or what he saw with it, but it still has its original optics. A brief audience with the telescope — under the stern gaze of Dr. Strano — gives you an idea of how hard it must have been for Galileo to be Galileo.

Squinting through the eyepiece as the tube lay on a table, hands gloved but careful not to actually touch the telescope, I found the field of view strikingly narrow. Down a tunnel of blackness all the light of the room was compressed into a blurry, fragile dot.

In order to accomplish high magnification on the planets, Galileo had to settle for seeing a very small slice of sky — about half the diameter of a full Moon in the case of this telescope — making it correspondingly difficult to find anything in the sky. Mapping the Moon, for example, would require moving the telescope.

Galileo began to build telescopes, gradually increasing in magnification, in the fall of 1609 after hearing that a Dutch spectacles maker, Hans Lipperhey, had built a spyglass. He probably made his first observations, of the Moon, in October, said Owen Gingerich, a historian of astronomy at Harvard.

At the same time, Thomas Harriot in England was observing and mapping the Moon, but failed to publish anything.

But Galileo, knowing he had ammunition to upend the universe, rushed into print in March 1610 with his report, Sidereus Nuncius, "Starry Messenger."

He sent a copy of the book, along with the telescope he had been using, to the Grand Duke of Tuscany Cosimo II de' Medici. Dr. Gingerich said the pamphlet amounted to "a job application" to the Medici family for whom, in one of history's first examples of branding, Galileo named the four satellites of Jupiter.

"Other planets were gods or goddesses," said Paolo Galluzzi, director of the Florence institute. "The only humans with position in sky were Medicis."

The ploy worked, Cosimo II hired Galileo as his astronomer, elevating him from a poorly paid professor at the University of Padua to a celebrity, making the equivalent of $300,000, a year, Dr. Galluzzi said. Galileo returned the favor by giving Cosimo another telescope, clad in red leather and stamped with decorations.

Galileo's social skills deserted him when it came to the church, even though he claimed to be a good Catholic. In 1633, after having been enjoined 17 years before from promoting the Copernican theory, Galileo was summoned to a trial in Rome, convicted of holding views "contrary to Scripture" and declared "vehemently suspect of heresy."

Galileo recanted and spent the rest of his life under house arrest, the enduring symbol of persecution of science by the church. He died in 1642, probably outliving many of his telescopes.

Of the first telescope Galileo sent to Cosimo II, with which he said he discovered the satellites of Jupiter, all that remain are the pieces of the main lens, which was dropped and broken in 1635, Dr. Galluzzi said. Cosimo's red leather telescope is intact but has only one of its original lenses.

The telescope now in Philadelphia is made of two half-cylinders of wood wrapped with varnished paper and held together by rings of wire. Dr. Galluzzi called it "a working tool," one Galileo could have kept and used his whole life, but nobody knows for sure.

The Florence institute that is home to both remaining telescopes is undergoing renovations this year, so it seemed an opportune moment to let at least one Galileo instrument go on a road show. (The leather one remains in Florence.) The wooden spyglass will be the centerpiece of "Galileo, the Medici and the Age of Astronomy," which opens April 4 at the Franklin Institute. The show, which runs until September, is part of the International Year of Astronomy, celebrating 400 years of modern astronomy.

The show will then travel to Stockholm in time for the Nobel Prize announcements in October before returning to the Florence institute, which will reopen as the Galileo Museum, Institute for the History of Science.

Dr. Strano, guardian of the telescope, allowed its visitors to spend only a little time with it before locking it up. Seeking more of the Galilean experience, Dr. Pitts and I went to the Franklin's roof with a replica of Galileo's red telescope. Made in Florence 60 or 70 years ago, the replica was itself an antique and had to be handled with white gloves.

Hoisting the long tube to our eyes like pirates or whalers on the lookout for Moby Dick, Dr. Pitts and I traded off, focusing the telescope by sliding the eyepiece in and out while staring at the illuminated tops of Philadelphia skyscrapers.

Then we went looking for stars, but there were only clouds. Finally a bright star, which Dr. Pitts identified as Sirius, appeared through a hole in the clouds to the southeast. Hoisting the telescope, weaving slightly, I scanned the sky trying to bring it into view.

Galileo, of course, had some kind of mount that told him exactly what direction he was pointed. I had Dr. Pitts standing behind me. "Up, up," he said, "to the left, left, left, too far, back to the right, up up. You should have it."

But that star never swam into my sights, and after half an hour my arms and shoulders were aching from keeping the telescope aloft. Clouds reclaimed Sirius.

It’s not easy being Galileo.