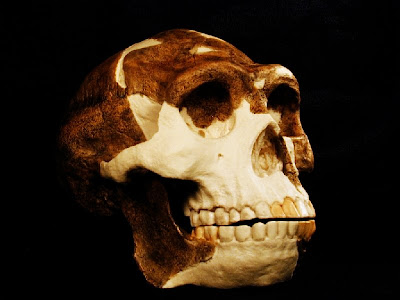 This is a good working example of how science works...that it is for the most part a venue of discovery and change...much like the standard view that the sun's core is a gaseous mass of hydrogen and challenged by 40 plus academic years of study by nuclear chemist Dr. Oliver Manuel [ An Iron Core For The Sun And More? ].

Agence France-Presse and United Press International
Barrel-chested "Peking Man," the collective name given to the treasure trove of homo erectus fossils found near the Chinese capital in the 1920s, is some 200,000 years older than previously thought, according to a study released Wednesday.

Using a new dating technique, Chinese and US researchers led by Guanjun Shen of Nanjing Normal University determined that the tool-making "erect man" lived in and around the caves of Zhoukoudian -- among the most highly-prized sites in the study of early humans -- as far back as 780,000 years ago.

The findings, published in the London-based science journal Nature, are sure to stir controversy among scientists, who have long debated the timing and routes of hominin migrations.

Up to now, the favoured theory was that a single exodus of homo erectus moved out of Africa some two million years ago, progressing across the Arabian Peninsula, the Indian subcontinent and coastal southeast Asia.

From there it was thought that some moved across land bridges during a glacial period to what later became the island of Java. The first erectus fossils were found on the Indonesian island in 1892, and have been definitively dated back some 1.6 million years.

Another group, the theory goes, made their way north, eventually settling in the region north and west Beijing.

But the revised dating of Peking Man -- combined with other recent studies -- points to a separate migration across Eurasia from another region inhabited by homo erectus some 1.8 million years ago, in modern-day Georgia.

"The actual distance is shorter if they went across the north, and the Dmanisi sight is about on the same latitude," said Russell Ciochon, a paleontologist at the University of Iowa who has worked extensively on homo erectus sites in Java.

A better understanding of early ecosystems also suggests a northern route, he said by phone. "It is harder for animals to shift longitude than latitude," he said.

Newly found fossils of extinct animals that lived only in tropical forests also suggest that much of southeast Asia -- the route along which homo erectus was thought to have travelled -- would have been impenetrable primal forest, said Ciochon.

Homo erectus' brain was about half the size of modern man's. It learned to make and use stone tools, notably a teardrop-shaped handaxe.

The species is thought to have survived up until about 30,000 years ago.

Thanks to stringer Tim.
Posted by Mercury at 11:47 AM