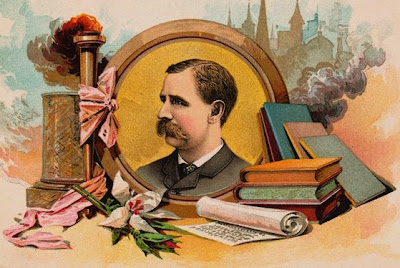 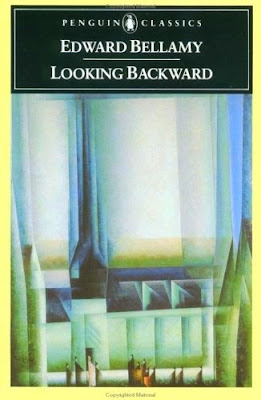 Bellamy grew up in western Massachusetts, a desultory law student who knew he wanted to be a writer. He soon ditched law for journalism and worked for a couple of newspapers — the Springfield Union and New York Post — before turning to fiction.

He wrote short stories and several popular Victorian novels — The Duke of Stockbridge (1879), Dr. Heidenhoff's Process (1880) and Miss Ludington's Sister (1884) — but attained fame with the publication in 1888 of Looking Backward, the story of a young man who falls into a hypnotic sleep in 1887, only to wake up in 2000 when the world has evolved into a great socialist paradise.

Bellamy embraced a central pillar of socialism, that cooperation among humans is healthier than cutthroat competition. This conviction formed the basis of Looking Backward and emerged as its central theme. Boston in the year 2000, Bellamy's setting for the novel, is indeed a world where socialism has emerged triumphant and the world is harmonious because of it.

Bellamy predicted a revolution in retail, with something like today's warehouse clubs and big-box stores. Transactions would be handled by a card system much like a modern debit card. People could use enhanced telephone lines to listen to sermons and classical music.

The book was a hit, selling over a million copies and ranking behind only Uncle Tom's Cabin and Ben-Hur: A Tale of the Christ as the top best-seller of the era.

Bellamy's success led to a slew of other utopian-themed novels, although none reached Looking Backward's level of popularity. The book also spawned experiments in communal living and fed the Nationalist movement, which urged the nationalization of all industry and the elimination of class distinctions.

Socialism, of course, had different connotations in the 19th century when it rose, principally as a backlash to the brutalities of industrialization and the exploitation of the workers by the ruling class. (Were he alive today, Bellamy might note, with interest, that while the worst excesses of the industrial age are gone, the exploitation continues.)

Had Bellamy lived to the ripe old age of 150, he no doubt would have been disappointed to find capitalism running amok, and his fellow man no less greedy and self-serving than in his own time.

But he didn't live to be 150. In fact, Bellamy was still a relatively young man when he died of tuberculosis in 1898.

Flatland: A Romance of Many Dimensions

Trips to the Moon

Around the World in Eighty Days

Earth to the Moon

Five Weeks in a Balloon

From the Earth to the Moon

Journey to the Center of the Earth

Off on a Comet

In the Days of the Comet

The First Men in the Moon

The War of the Worlds

When the Sleeper Wakes

"The War of the Worlds" by H. G. Wells as performed by Orson Welles & the Mercury Theatre on the Air and broadcast on the Columbia Broadcasting System on Sunday, October 30, 1938