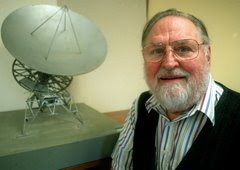 "I'm just a guy interested in most things," he told an Ann Arbor News reporter in 2000.

But Haddock, a University of Michigan professor emeritus of astronomy, was a pioneer in radio astronomy (he designed U-M's radio telescope at Peach Mountain near Dexter) and an early rocket scientist. He also contributed to the Allies' victory in the Pacific in World War II.

While working at the U.S. Naval Research Laboratory in Washington, D.C., Haddock designed and developed the first submarine periscope radar antenna used extensively in the Pacific to sink Japanese supply and fuel ships.

When the war ended, he turned to astronomy and detected radio emissions for the Orion and other nebulae.

In 1956, Haddock accepted a position at U-M as the founder and director of the Radio Astronomy Observatory at Peach Mountain, off of North Territorial Road, northwest of Dexter.

"He was the person who established radio astronomy in the observatory at Michigan, and was one of the leaders in the field in the '40s and '50s," said U-M Astronomy Professor Hugh Aller, who was a student of Haddock's before joining the faculty.

The 85-foot radio telescope Haddock designed at Peach Mountain was used to make the first radio detection of Mercury, and the first measurement of Saturn. It is still in use today.

"He was a very impressive guy; a big guy with a booming bass voice, and a quick mind," said Charles R. Cowley, U-M astronomy professor emeritus. "He was extremely knowledgeable in all sorts of different fields; intellectually curious."

He was a member of the Huron Valley Chapter of the American Institute of Architects.
Haddock is survived by his wife, Deborah Fredericks, sons Thomas and Richard, and four grandchildren.