Good reason to keep feet on the ground 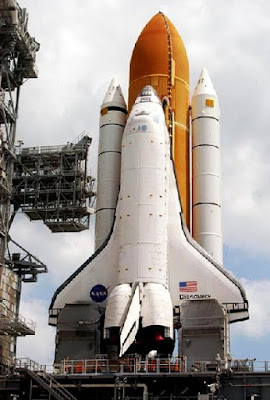 "Fuel leak" was what is was called this time...the time before was a fractured fuel valve. Shuttle Discovery has made 35 previous trips and despite retrofitting of the craft, it is getting fatigued and old. It has outlived its function. Fortunately the issues was found while all was on the ground. These are small but significant issues that could abort or totally jeopardize a mission. These missions are but a few hundred miles away but consider a small issue thousands or millions of miles away--then what. It just shows that the mechanicals of any system can fail and cause problems. Best to stay put and let probes, satellites, and unmanned vehicles do the work and take the risks...and done cheaper.

The New York Times
KENNEDY SPACE CENTER, Fla. — The space shuttle Discovery will remain on the ground until at least Sunday after a hydrogen leak scrubbed a launch attempt on Wednesday.

"We're in the business of launching, not scrubbing," said Michael D. Leinbach, the shuttle launch director at a news conference Wednesday evening. "But our business requires perfection, and our vehicle was not perfect today."

Technicians will not be able to get a close look at the leak site, near the connection of a vent line to the external fuel tank, until Friday afternoon. The vent line carries away excess hydrogen pressure from the tank and the spacecraft to where it is safely burned.

If the fix is straightforward and quick, shuttle officials hope to launch the Discovery at 7:43 p.m. Sunday.

That will put a time crunch on the mission, because the Discovery has to undock to make room for the arrival of a Russian Soyuz spacecraft, scheduled to launch the next day.

If the Discovery cannot launch by Tuesday, then the mission will likely be pushed to April, with repercussions on the schedule of future shuttle missions and the construction of the space station.

The countdown was proceeding smoothly toward a 9:20 p.m. liftoff under clear skies and full moon. But at about 2 p.m., when the hydrogen tank reached 98 percent full, sensors detected a hydrogen leak at the valve next to the external tank, creating a potential flammability problem. The launch was called off at 2:36 p.m.

Mr. Leinbach said he was 99.9 percent certain that the leak was in the ground equipment and in the shuttle itself, which would make it easier to fix.

"We'll replace what needs fixing," Mr Leinbach said. "We have spares on the shelf."

NASA officials said the leak was not related to three hydrogen gas valves that were inspected after a similar valve broke during the mission of the shuttle Endeavour in November. That failure had no effect on Endeavour’s ascent into orbit, but it did lead to concerns that if a larger piece broke off it could be catastrophic.

NASA postponed the launching of Discovery several times to analyze the valves, and the mission is now a month behind its original launching date.

Through experiments and computer simulations, NASA engineers concluded that it was highly unlikely that a piece from a valve would cause significant damage, and a new magnetic testing method convinced them that the three valves installed in the Discovery were free of cracks.

The Discovery's main cargo is a 45-foot-long, 31,000-pound truss segment with two sets of solar panels.

When the solar panels are unfurled and plugged in, the station’s power-generating capacity will rise to 120 kilowatts from 90 kilowatts.

Von Braun sketches for sale
Posted by Mercury at 10:16 AM