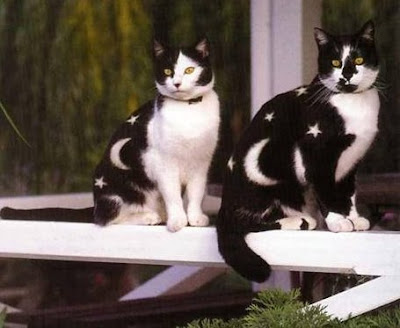 A rare photo of the Oxford and Bruno preparing their stick in selling highly concentrated Acapulco catnip for "purrfect" mental "cattentment" on the Cat Channel...all for $19.95 plus $4.95 for shipping and handling. [The product is actually dried grass clippings spiked with old Hartz Mountain catnip. FTC is investigating.]
Television Infomercials...do you watch, believe, and buy?

Snake oil salesmen [and saleswomen] are everywhere on television. They are obnoxious, loud, manipulating, and even hide under the PBS logo. They sell goods and services that are appealing--must have goodies...they will make life easier, make us smarter--all for $19.95. But for the most part they are self-serving entrepreneurs taking advantage of the viewers and lining their pockets with greenbacks. Complaints range from delayed shipments, defective goods, and terrible customer service. I have seen a few--all for entertainment. My favorite was the hype of the Barack Obama commemorative $1 coin sets. Enameled portrait of President-elect Obama was applied to perfectly good $1 coins now to be bought as historical collectibles to be squirreled away with the basic anticipation that they will be valuable in the future. Guess what...they will be worth $1 each. I know things are economically tough with PBS affiliates but hours and hours during pledge weeks of the likes of Wayne Dyer, Suzie Orman, and Daniel Amen are insulting and not representative of PBS.

By airing another self-help show disguised as medical science -- the dubious "UltraMind Solution" -- the public network continues to undermine its credibility.

salon.com
In May I reported that PBS stations were airing medical programs that weren't adequately reviewed or vetted by either the local station or parent PBS corporation. My concern was that publicly funded stations were broadcasting questionable medical claims, made by Daniel Amen, M.D., about unproven methods for the prevention and treatment of Alzheimer's disease, without properly warning viewers the information was controversial. I suggested that, at the very least, the stations should present a clearly visible banner or disclaimer that the program doesn’t represent the views of the local station or PBS. Even a self-serving commercial station like CNBC informs viewers of each talking head's personal involvement with any stock being discussed, and infomercials are clearly labeled as "Paid Programming."

Unfortunately, nearly a year has passed and nothing has changed. Last week, I turned to my local PBS station, KQED, and ran headlong into yet another program of medical self-promotion. Mark Hyman, M.D., a family physician, was talking about "brain fog" and "broken minds" and how such "conditions" could be cured or prevented by using "The UltraMind Solution" -- a combination of books, DVDs and home questionnaires.

Before I could change the channel, I heard Dr. Hyman make the following comments: "The way we think about disease, mental illness, and our brain aging, actually has nothing, nothing to do with how our body actually works … The way we think about disease is all wrong … the name of the disease tells us nothing about the real reason or the causes of them. Diseases don't exist."

Surely this rather unconventional opinion should have caught the attention of those responsible for airing this program on public television. I find it hard to believe that this type of rhetoric can be seen as consistent with mainstream medical wisdom, even by those who are not well versed in science.

If Dr. Hyman is correct, then we should disregard present medical knowledge and research. And yet, to justify his pet theories, Dr. Hyman cherry-picks from the very medical literature that he thinks approaches disease from the wrong perspective. Take, for example, his opinion that "the most remarkable scientific finding of the last decade is that you can have an inflamed, sore and swollen brain." And from his blog site: "New research proves that almost all brain problems are connected to or caused by inflammation." Indeed, Dr. Hyman opines that "if you treat the inflammation, the symptoms go away."

To support this fringe opinion, Dr. Hyman has used what I refer to as a cut-and-paste technique; he takes isolated observations out of context to generate a theory not proven or justified by the findings.

He begins by saying that Martha Herbert, M.D., neurologist at Harvard, "has found that kids with autism have swollen large brains on MRI." But what Dr. Herbert has written on the National Autism Association Web site is that "children with autism tend to have heads that are larger than normal," but when "you look at the brains of these children with large heads using an MRI scan, they usually look normal." Her conclusion: "At the current time, we do not understand the relationship of the large brains to the autism in these children."

Note to Dr. Hyman: Larger is a measurement of size and isn't synonymous with swollen.

Equally puzzling is his line of reasoning in assigning inflammation a primary role in diseases as diverse as autism and Alzheimer's. Dr. Hyman cites the observation of Johns Hopkins neuroscientist Dr. Diana Vargas that there is evidence for "inflammation in the spinal fluid and brains of autistic children." But in her paper, Dr. Vargas points out that "there has been no direct evidence linking findings in the peripheral blood to immune activity in the brain of autistic patients; the most comprehensive postmortem study reported no inflammatory changes or glial reactions." (Glial cells are the non-neuronal brain cells that, among other things, protect against pathogens and remove the debris of neurons that have died.) However, with new techniques, Dr. Vargas believes that she has demonstrated glial reactions in the brains of autism sufferers.

Finding such glial cell changes, if confirmed in other laboratories, wouldn't be particularly surprising. Glial cells respond to all sorts of insults. Dr. Vargas has found similar findings in widely disparate disorders, including Alzheimer's disease, Parkinson's disease and amyotrophic lateral sclerosis -- all diseases for which the underlying causes remain poorly understood, but are associated with destruction of neurons specific to that illness. Perhaps the glial reactions seen by Dr. Vargas are nothing more than a normal response to damaged or dead neurons.

An appropriate analogy would be a bacterial sore throat. The streptococcus organism causes the sore throat; what we see on examination of the throat is inflammation of the underlying tissues. But it wouldn't make sense to say that the inflammation caused strep throat; rather it would be a response to the strep. In order to blame inflammation as the primary cause, one has to abandon the traditional disease model -- the position that Dr. Hyman takes at the start of his program.

Note to Dr. Hyman: Association is not causation.

There is no need for a further line-by-line dissection of Dr. Hyman's claims. His opinions are clearly controversial both in terms of content and logic, and it doesn't take a medical degree to spot them. Nor does it take more than a few minutes on the Internet to uncover the discrepancies between Dr. Hyman's comments and the actual research cited.

My first exposure to public television was in 1955, watching "Science in Action," a program locally produced by the California Academy of Sciences. Through the years, I have felt that PBS has provided many of the best science programs on television. Science is a method of thought. It's through good science programs that we learn how to think, including how to properly assess conflicting information. I would hate to see their airtime curtailed because of lack of funding.

But showing dubious science like Dr. Hyman's "The UltraMind Solution" on pledge nights, as KQED has been doing in past weeks, is to demean viewers' reasons for watching public television. Apparently PBS's mission is to raise money by exploiting viewers' gullibility at the expense of trustworthy programming. If so, it has achieved its goal -- and undermined the central reason for having educational TV in the first place.

Repair your scratch?...Billy Mays can--NOT
Posted by Mercury at 8:04 AM

just yet another reason i have all but tuned out PBS.....as well as NPR. I invest in CD's of classical music which i find a better way to surround life.

Many people I talk to feel the same way Tim. They are fed up with the hype and opaqueness of public television. I think all of PBS, including the affiliates, need reorganization and a reaffirmation of the primary goals of a public television system...but that will never happen.