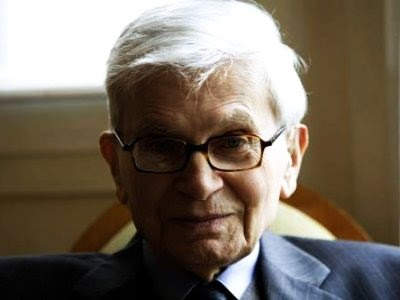 Bernard d'Espagnat
I still maintain that this is a good prize. I think we will have to admit that we may be incapable of describing the whole universe and that some things will have to lie in the metaphysical.

ScienceNOW Daily News
What is reality? French physicist Bernard d'Espagnat, 87, has spent a lifetime grappling with this question. Over the years, he has developed the idea that the reality revealed by science offers only a "veiled" view of an underlying reality that science cannot access, and that the scientific view must take its place alongside the reality revealed by art, spirituality, and other forms of human inquiry. In recognition of these efforts, d'Espagnat has won this year's Templeton Prize, a £1 million ($1.4 million) award sponsored by the Templeton Foundation, which supports research at the intersection of science, philosophy, and religion.

In classical physics, what you see is what you get: Any measurement is presumed to reveal an intrinsic quality--mass, location, velocity--of the thing measured. But in quantum mechanics, things aren't so clear-cut. In general, the measurement of a quantum object can yield a range of possible outcomes, so that the original quantum state must be regarded as indefinite. More perplexing still are "entangled" states in which, despite being physically separated, two or more quantum objects remain linked, so that a measurement of one affects the measurements of the others....

Albert Einstein and others objected to the implications of these lines of thought and insisted that quantum mechanics was an incomplete theory precisely because it did not support old-fashioned literal realism. But that's a lost cause, says d'Espagnat, who studied particle physics early in his career. Instead, he has concluded that physicists must abandon naïve realism and embrace a more sophisticated philosophy of reality. Quantum mechanics allows what d'Espagnat calls "weak objectivity," in that it predicts probabilities of observable phenomena in an indisputable way. But the inherent uncertainty of quantum measurements means that it is impossible to infer an unambiguous description of "reality as it really is," he says. He has proposed that behind measured phenomena exists what he calls a "veiled reality" that genuinely exists, independently of us, even though we lack the ability to fully describe it.

Asked whether that entails a kind of mysticism, d'Espagnat responds that "science isn't everything" and that we are already accustomed to the idea that "when we hear beautiful music, or see paintings, or read poetry, [we get] a faint glimpse of a reality that underlies empirical reality." In the possibility of a veiled reality that is perceived in different and fragmentary ways through science, art, and spirituality, d'Espagnat also sees, perhaps, a way to reconcile the apparently conflicting visions of reality that science and religion provide.

Arthur Fine of the University of Washington, Seattle, points out that these views--as d'Espagnat acknowledges--have their roots in Immanuel Kant's distinction between "a world of noumena, the essentially unknowable but real stuff, [and] the world of phenomena." But it's problematic, he notes, to think of noumenal concepts as having scientific value if you can't say precisely what they are.

D'Espagnat's writings on quantum mechanics lay out with great clarity the genuine puzzles that quantum mechanics presents, says Jeffrey Bub of the University of Maryland, College Park. But he's skeptical about finding common ground among notions of reality from art, science, and spirituality. As he puts it, if there's something about the physical world that quantum mechanics isn't telling you, "it doesn't follow that those gaps can be filled with poetry." 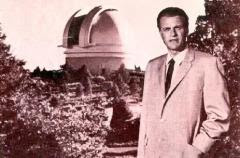 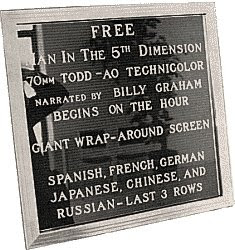 And now this may be a slick segway to an unusual section of what we cannot know about the universe and that lies with theology and for some, religion, and skillfully brought to the public by the likes of the venerable Rev. Billy Graham who is now retired and quite frail. Now, I do not subscribe to his religion but Graham did something quite unusual in 1964 with the release of a short [28 minute] film called Man in the 5th Dimension. Of course there was the plea to accept Jesus, etc but it is remarkable that Graham had embraced a bit of science and appears to intimate that all about the universe cannot be quantified by mankind. What is also unusual about this film is that was shot [Graham's World Wide Picture Company] and released in a new and popular motion picture format Todd-AO 70mm. Only 11 70mm prints were struck none of which have survived though there are 16mm prints and video copies available. The film ran from 10am to 10pm at the Billy Graham Pavilion during the 1964 New York World's Fair. 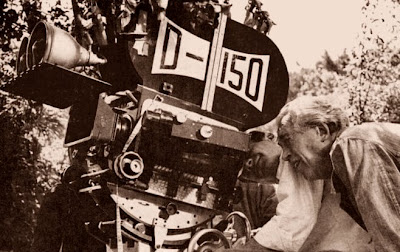 Todd-AO was one of many large format film projection systems that included Vistavision, CinemaScope, Panavision.