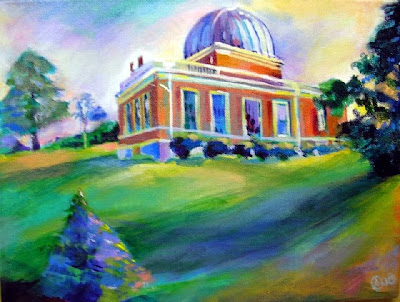 Posthumous accolade of one man's effort to keep a public observatory functioning.

For most of his life, Nohr was devoted to this Mount Lookout observatory.

He cleaned and rebuilt the two telescopes. He led a drive to save the observatory from the wrecking ball, and today Cincinnati boasts the oldest operating public telescope in the nation: from 1845.

But something was missing at the Paul Nohr Memorial Sundial dedication, and no amount of waiting was going to change that.

This ground level sundial, which has a 50-foot diameter, requires audience participation - and a few rays of sun - to get the time.

It was designed by RWA Architects and found support in donations from businesses and friends of Nohr, a former University of Cincinnati astronomer who died in 2006.

Nohr first came to the observatory in the late 1940s for an astronomy club meeting. His dad drove across town. The boy took weekly trips across the cosmos.

By the time Nohr was an adult, the observatory had fallen into disrepair. Nohr couldn't ignore the place, his wife, Pamela, said. "He loved teaching about astronomy."

And nothing was better than explaining the nuances of the firmament to an awestruck kid. In fact, Nohr wanted to retire from the university to teach children full time.

"I remember when I met him," said Chuck Strubbe, 50, of Hyde Park. "We walked into the observatory. He looked at us and said, 'Here's the telescope - point it at something.'"

"We were like whoa, this telescope was a national treasure."

Nohr knew that telescopes - even antique ones made of wood with lenses from Bavaria - were not museum pieces. They were meant to be viewed not stored.

[The Cincinnati Observatory Center is open to the public on Friday and Saturday nights but reservations are suggested. Children under 18 are admitted for $3; adults, $5. The observatory, on the border of Mount Lookout and Hyde Park at 3489 Observatory Place, has a gift shop on the grounds. Call 321-5186 for reservations or email: observatory@fuse.net.]