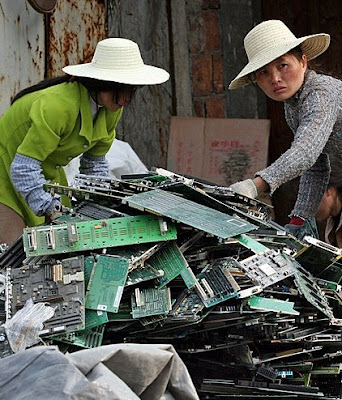 "Good thing"--less human exposure to toxic materials; "bad thing"...human livelihoods diminished. It also means that e-scrap, for example, will be junked by other means.

The New York Times
BEIJING — Each morning Tian Wengui emerges from the home he makes under a bridge here, two large sacks slung over his shoulder. Through the day, and well into the night, he scours garbage cans for soda bottles, soy sauce containers and cooking oil jugs. Selling the refuse to one of Beijing's ubiquitous recycling depots, Mr. Tian can earn $3 on a good day.

But good days are getting harder to come by.

Since Mr. Tian migrated from Sichuan province, the multibillion-dollar recycling industry has gone into a nosedive because of the global economic crisis and a concomitant fall in commodity prices. Bottles now sell for half of what they did in the summer.

"Even trash has become worthless," Mr. Tian said recently as he made his way to a collection center, his sacks nearly bursting.

The collapse of the recycling business has affected people like Mr. Tian, the middlemen who buy the waste products and the factories that refashion the recyclable waste into products bound for stores and construction sites around the world. American and European waste dealers who sell to China are finding that their shipments are being refused by clients when they arrive in Asia.

The ultimate victim may be the environment, already overrun with enough trash in places to threaten people's health, now further burdened with refuse that until recently would have been recycled.

The effect is being felt acutely in China, the world's largest garbage importer. The United States, for example, exported 11.6 million tons of recovered paper and cardboard last year to China, up from 2.1 million tons in 2000, according to the American Forest and Paper Association.

Because Chinese consumption is far less developed than the West’s, more than 70 percent of the materials that feed the country’s recycling industry must come from abroad, said Wang Yonggang, a spokesman for the China National Resources Recycling Association.

"Chinese tradition is all about saving and being thrifty," he said. "People here would rather have things repaired several times before abandoning them."

The drop in commodity prices was so rapid that in a matter of weeks last fall container ships carrying used railroad wheels and empty dog food cans arrived in Chinese ports worth far less than they had been when they departed Newark, Rotterdam or Los Angeles.

"Everything was moving along just fine until October and then we fell off a cliff," said Bruce Savage, a spokesman for the Institute of Scrap Recycling Industries, a trade organization that mostly represents American waste processing companies.

The United States exported $22 billion worth of recycled materials to 152 countries in 2007. Now the organization estimates the value of American recyclables has decreased by 50 to 70 percent. Western dealers say they are grappling with mounting stockpiles whose value in many cases continues to sink. To make matters worse, Chinese importers have been demanding to renegotiate contracts drastically downward. In some cases, they are refusing to accept shipments they already have a contractual obligation to take.

"There are still many containers full of waste sitting at the port in Hong Kong," Mr. Wang, of China National Resources Recycling Association, said. "It's hard to say when they'll be picked up."

"People in this industry were once making a killing taking waste from overseas, but the era of huge profits is now over," Mr. Wang said.

Standing in a dimly lighted, half-empty room that is usually packed with broken radiators, soda bottles and newspapers, Mr. Gao said he earned nearly $450 a month in the boom days of 2007. Now he is lucky to make $80.

"People aren't selling their junk to us because they think the price is ridiculous," he said.

Many manufacturers that process imported recyclables are finding it difficult to stay in business.

"My goal is just to survive," said Luo Guoliang, an executive at the Yang Xin Long Fu Company in Shandong province, which makes polyester and polypropylene filaments for fabric and rugs, all of it recycled material.

Mr. Luo said his company imported a third of its plastic from abroad last year, paying $1,200 for a ton of shredded plastic bottle flakes. While the company now pays half that amount, he said many of his domestic suppliers had closed, making it difficult to find the raw material for production.

Yet, in China's current malaise, the company has bigger concerns. Fearing instability, the local government has forbidden factories from laying off workers, even as sales evaporate.

"The damage from the economic crisis is unbearable." Mr. Luo said.

Across the Pacific, waste traders in the United States are shutting mills, cutting production and selling their stock at fire-sale prices. George Adams, president of SA Recycling, which processes metal at 40 recycling plants in the western United States, said he wrote down $10 million in losses in October.

"That inventory is gone now, but the pain I won't soon forget," said Mr. Adams, who ships much of his product to China.

Environmentalists and recycling experts worry about the impact of the recycling slump. With Western curbside recycling programs becoming less profitable, local governments are being forced to re-examine their programs as they struggle to balance budgets. In some cases, that means that office printouts and soda cans, once exported, went to landfills.

"It used to be that recyclers would pay governments for these goods," said Mr. Savage of the Institute of Scrap Recycling Industries. "But now governments have to pay recyclers. What was once a revenue stream is now a cost to cities."

While recycling executives say prices have bottomed out and in some cases have improved slightly — for copper and plastics, for example — they are bracing for tough times ahead as the global economic crisis wears on.

So, too, are the residents of Bajiacun, a village built on trash on the outskirts of Beijing, where hundreds of people earn a living from — and live among — other people’s castoffs.

On a recent day, Chen Xiaorong, 36, squatted on a vast island of stockpiled notepads, magazines and schoolbooks near her tiny red-brick shack, a tower of newspapers looming above her.

"I know people who lost everything betting on recycling," she said. Many of her neighbors have returned to the countryside, while the $735 her extended family would earn a month has shrunk to $360.

Sorting through discarded calligraphed sheets of Chairman Mao's poems, she added, "China now has more garbage than it can digest. Do we really need America's junk, too?"

Junk televisions and recycling
Posted by Mercury at 10:27 AM

Nice Article. Keep it up.