Invest in the old...fossil, that is 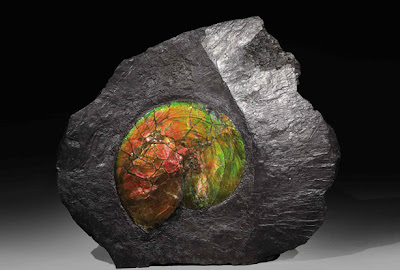 One of the two ammonite fossils being sold at the Natural History sale in Paris on April 7, 2009
What is the fascination for very old things to purchase and own? Is it a true interest in the science of the artifact? Is it for aesthetic reasons? Is it like precious metals...a means of investment? Who knows. But a recent discovery in Canada [100-million-year-old petrified shell of an extinct Canadian ammonite fossil] will go to the auction house with an expected auction value of 135 million. Invest wisely.

Canwest News Service
The stunningly beautiful, 100-million-year-old petrified shell of an extinct Canadian marine creature is expected to fetch a small fortune at an auction next month in France, the latest sign of exploding interest in the brilliantly coloured ammonite fossils of southern Alberta.

The latest showcase specimen, a 44-cm-wide spiral of shimmering rock unearthed in the fossil-rich Bearpaw shales south of Lethbridge, is valued at about $135,000 ahead of Christie's April 7 sale of natural history artifacts at its auction house in Paris.

A second, smaller Bearpaw ammonite still encased in stone has an estimated value of more than $80,000 and is being offered at the same sale.

Noting the "exceptional quality" of the bigger fossil, Christie's spokesperson Capucine Milliot said the object is "extremely rare" because the "precious stone with bright and iridescent colours comes exclusively from southern Alberta."

Earlier this week, a 50-cm Alberta ammonite hailed for its "completely opalized green, blue, yellow and red" colouring sold for $60,000 at a New York auction. Last year, a 70-cm Bearpaw specimen was purchased for a world record $300,000 at a sale in the U.S. -- more than twice the pre-sale estimate.

"Prices have been going up because there's more and more awareness about the (ammonite's) beauty and relative rarity."

He says demand for the fossils -- formed from the remains of a primitive mollusk that died out at the end of the dinosaur age 65 million years ago -- is also being driven globally by practitioners of the Chinese esthetics system feng shui, who covet the Alberta ammonite's bright colours and spiral shape.

While ammonites can be found in many countries, the conditions creating the dazzling hues of the Canadian fossils "existed only in one place in the world -- right here in southern Alberta," says Mr. Pare.

The Bearpaw shales of Alberta and Saskatchewan and the adjacent U.S. states were formed as the seabed of an ancient inland ocean. The multi-coloured stone found in the preserved remains of the ammonite -- a species believed to be related to the modern-day octopus, squid and nautilus -- were traditionally used for decorations by people of the Blood Nation, native inhabitants of the region who continue mining the substance today.

Mr. Pare says the ammolite shards extracted from the Korite mine near Lethbridge came from ammonite shells that were fractured through millions of years of geological change. But about 50 times a year, fairly intact fossils are discovered and sold to museums or collectors around the world.

Each ammonite exported from Canada requires a permit from provincial experts and a branch of the federal Department of Canadian Heritage. Occasionally, scientifically valuable specimens are retained for study.

Thanks to "old fossil" stringer Tim.
Posted by Mercury at 6:41 PM